Just over a week ago I spent 5 incredibly hectic days in Jordan. Actually “hectic” is an understatement for the level of intensity we experienced. I was shooting a food documentary called World Café Middle East and we had to hit the ground running! As soon as I, and Martin Evanson (the soundman) had touched down, we were politely informed that our complete video camera kit (10 Pelican cases full!) was being held by Jordanian Customs due to a “mix-up”. It was 9pm and we had to locate another HD Camera kit—not the easiest thing in Jordan. Thankfully our producer, Silvia, was on the ball and before long we had snagged a broadcast quality HD kit that was available to start our shoot the next day

My first impressions of Jordan were speeding around the streets of its capital, Amman looking for a video equipment rental company. All the while I had my trusty Leica M6, 35mm f/2 Summicron version 4, 90mm Elmarit f/2.8 and 15mm CV loaded with the film stock I love best- Rollei Retro 400, sourced from RedDotCameras, London.

The 35mm Summicron V4 is my very favorite lens and I take 90% of my photographs with it. I know this piece of glass inside out and how it will perform at various apertures. My shooting technique is classic and simple—I try and fill the frame with interesting elements and eliminate what is not essential. 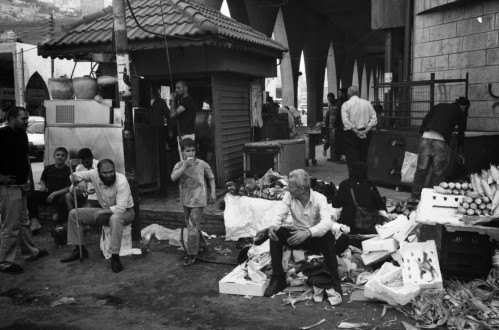 Day 1: Sweets and pastry on the run

On the first day of our shoot, we rocked up to Zalatimo Sweets, Amman, a family-run business that was started in the streets of Jerusalem. Zalatimo has become one of the most respected pastry and sweets makers in the Middle East and take it from me their confectionary is truly out-of-this-world.

The process of manufacturing has always fascinated me me. I love the synergy, industry, concentration, skill, and professionalism it demands. It’s all got to flow smoothly, and deliver excellence on a day-to-day basis. 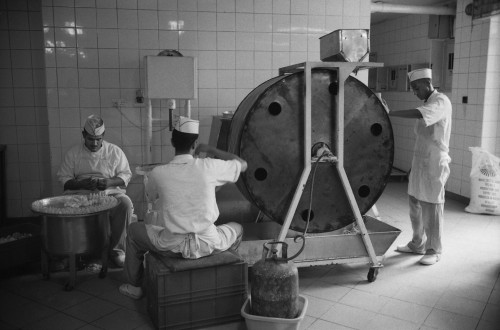 Now buzzing with a sugar high we hit the streets of Amman. Filmmaking is all about waiting for something to happen or travelling somewhere and trying make things happen. This shot was taken just outside of the Thieves Market. I “shot from the hip” without even looking thru the viewfinder and guessed at the aperture setting and the exposure.

If there ever was a Leica moment during the entire trip, this was surely it. 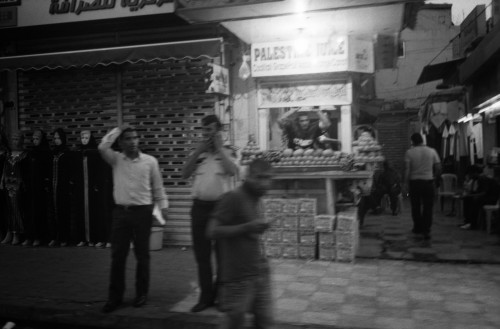 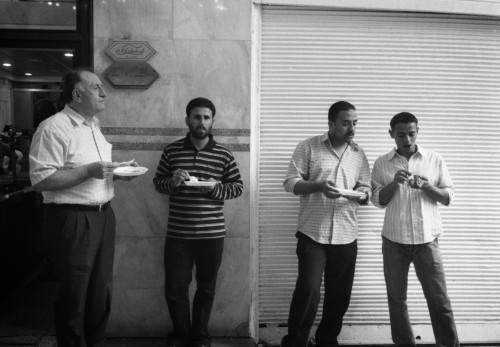 I’ll be honest. I am still struggling to remember exactly what we did on Day 2 of our shoot I will have to check with the others in the production crew and fill everyone in at a later date.

I will never forget Day 3 in Jerash. My Dad had made it to Jerash last year and had shown me some pictures he’d taken there but I didn’t quite realize how big and extensive the Roman ruins of Jerash actually are.

Our guide, Stellan (Swedes get everywhere!) thinks it will be another 200 years before the continuing excavation of Jerash will finally be completed and I can see why. The site is incredibly huge and beautifully preserved. Like Egypt, Jordan’s dry climate has been a saving grace for it’s architectural treasures. 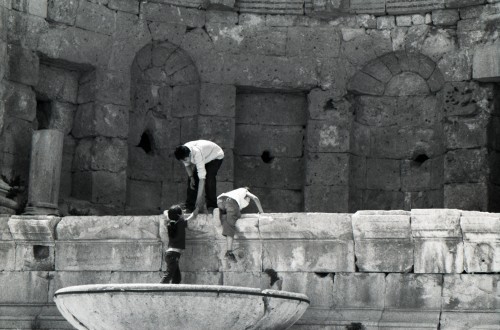 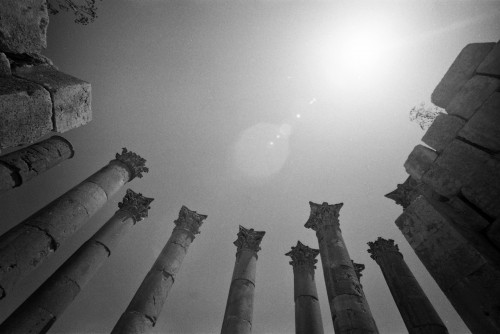 Aside from the historic Hadrian’s Gate, Roman roads, pillars and temples, if you get a chance it is worth checking out the Amphitheatre and is remarkable shows including with bag-pipers, and the performances at the Hippodrome that include gladiators with ill-fitting wigs, and a chariot racing show. For an entertaining as well as educational day out it can’t be beat.

Sadly I have no picture to document this so just imagine Martin and I bouncing around in the back of a pickup truck racing around the Hippodrome trying to film a chariot race!

On Day 4 we ventured out to the desert near Karak. We had been invited to film the making of jameed, preserved goat’s milk, so naturally our first task was getting out to the goats in the dust bowl. We got to the goats all right but I got this picture that captures the feeling of the location. I just had to wait for the boy to turn round to get the shot I wanted. 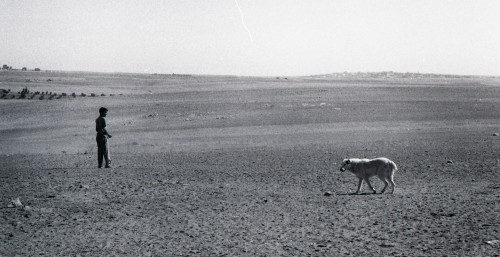 After our desert trek we went back to the Jameed-making huts and into the shepherd’s family house. I noticed that the hospitable old couple were from different religious backgrounds and I was determined to capture that. 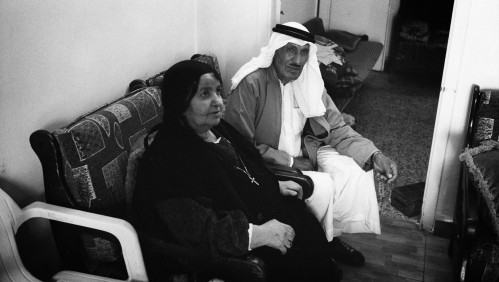 Our last day in Jordan was spent at Petra, a well-known tourist destination. It was a shame we’d only had 2-½ hrs of sleep since we had to beat the tourists to shoot as much of the Treasury and walk through the canyon. Despite our grumbling it was well worth the early wake-up call. Like many, my first knowledge of Petra came from watching Indiana Jones and the Last Crusade.

I was impressed by it at the cinema but nothing could have prepared me for it in real-life, and the Treasury is only part of the area. There are many more treats to discover, but unfortunately there is no time in TV when you have to shoot a cooking sequence with very hungry Bedouin.

Here I tried to capture what it must have been like to discover Petra for the first time. It’s best to let the pictures do the talking. 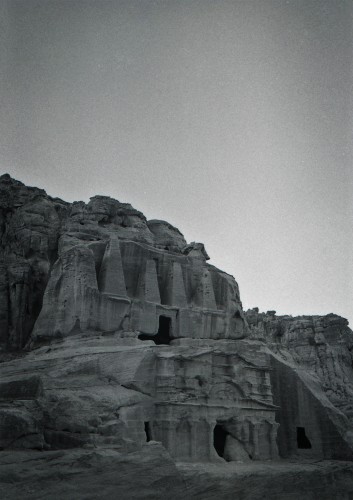 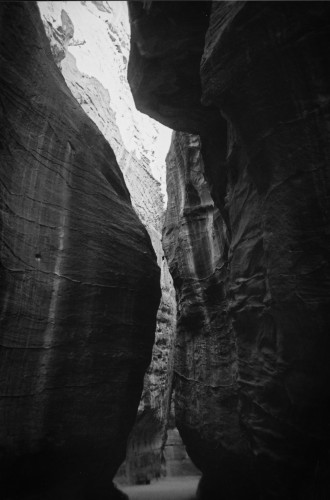 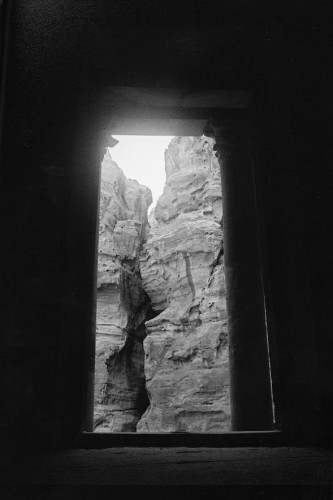 This is a guest post by Robert Callway who has his own production company Nilsfilm which produces corporate promos and documentaries. Also a cameraman and, occasional, photographer, Robert has shot a number of prime-time C4/BBC documentaries including C4’s “30 Minutes with…”, BBC’s “The Nine Lives Of Alice Martineau” (BAFTA winner) and Living’s “Paranormal Egypt.” He prefers his images to tell the story and never leaves home without his Leica M6. For more pictures and information, visit his website Nilsfilm.