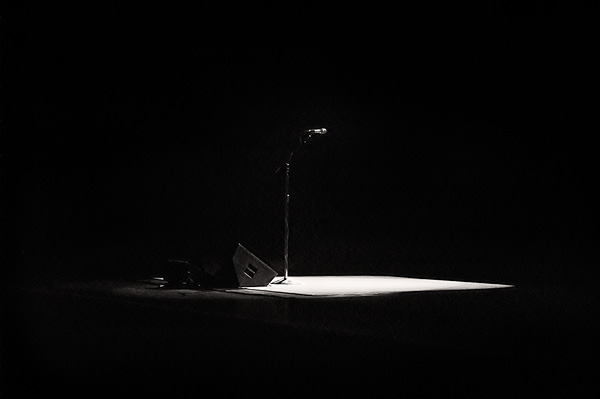 A pessimist would suggest that I’m a painfully slow learner. An optimist would opine that I’m refreshingly open-minded. Both would draw their conclusion from the same exact occurrence — my conversion to rangefinder photography after 20 years of shooting SLRs. It’s now been over two years since this fateful switch and I’ve documented the process, experience and rationale several times on my ULTRAsomething site and for the Leica Camera Blog.

Both the pessimist and the optimist, in spite of their differing assessments of my personality, would likely agree on one thing: a rangefinder might be more suitable for my particular style of photography, but it won’t fully replace an SLR. Rangefinders aren’t intrinsically equipped for macro, shift or telephoto lenses and it was precisely for this reason that I held onto my Canon EOS system for as long as I did. However, last year when I realized my macro, tilt/shift and telephoto needs were all hovering around zero, the entire system went bye-bye on Craigslist. It netted me a nice little cash cushion.

I immediately applied a tiny chunk of that cushion to the purchase of a Panasonic DMC-GH2, whose purpose was to provide video capabilities, telephoto proficiency, a through-the-lens viewing option and digital backup to the Leica M9. I figured, with this combination, the only thing I’d miss was the ability to shoot concerts and it’s not like I’m shooting many concerts these days. 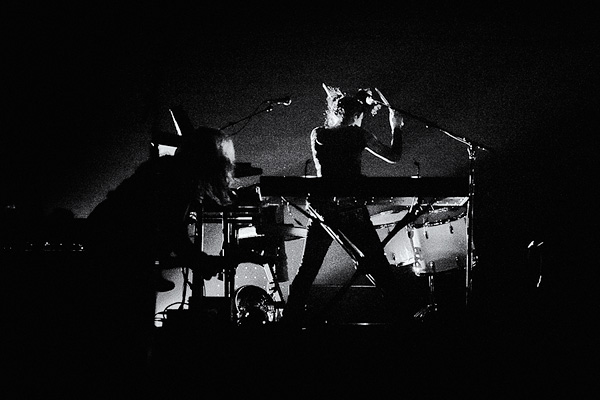 My previous career as a music products designer enabled me to attend numerous musical performances and it was a fringe benefit that I both relished and appreciated. Over the years, as my involvement with music waned, so did my concert access. Consequently, I was quite pleased when my friend Debbie Shair, keyboardist for Heart, once again offered me tickets and a photo pass to their Vancouver show. My pleasure was mixed with a tiny bit of trepidation since I would have to work without an SLR — the go to camera for all my past concert photography forays. Instead, I would have to shoot this concert with a rangefinder. But, hey, the late, great Jim Marshall used a rangefinder and that didn’t keep him from being rock music’s greatest photographer.

I pumped my body full of caffeine in a feeble attempt to duplicate the effect of Mr. Marshall’s more potent stimulant of choice, then I hit the theater early to scope out possible photo positions. That’s when the real trouble began. Many venues rope off a little section in front of the stage for photographers, not here. Other venues, when they don’t rope off the stage, will still allow photographers to crouch in front as long as they don’t block anyone’s view. “Not allowed,” said the theater staff — apparently failing to believe my claims of being a world class croucher.

I walked over to the far left of the stage — so far left that there was nothing behind me but an emergency exit and nothing in front of me except a few speaker columns piled upon the stage. From the floor, the speakers would block my view of the band, but if I were to climb up on stage, I’d be able to shoot over the speakers — safely out of view of the audience, and separated from the band by an impenetrable wall of transducers.

A surly looking security guard stood leaning against the emergency exit. I turned on the charm and asked if I might photograph from that location on stage. First he glared at me. Then he glared at the stack of speakers. Raising a walkie-talkie to his mouth, he pushed a button and muttered something about “one of those media types” wanting to photograph from behind the monitors. His radio responded with a burst of static, which he was somehow able to interpret as an answer. “No way,” he said. “You’ll have to stay in your seat.”

Undaunted, I walked to the far right of the stage, and began chatting up that flank’s much more amiable security guard. I answered a few questions about my “weird” camera, and politely asked if I might climb up on stage and photograph the band from behind the monitor pile. “I dunno, you’ll have to ask the boss,” he responded, nodding his head in the direction of the still scowling guard with whom I’d recently struck out.

Dejected, I plopped down in my fourth row center seat (thank you, Debbie). I realized that the only way I’d be able to shoot this concert would be from right here. Ugh. 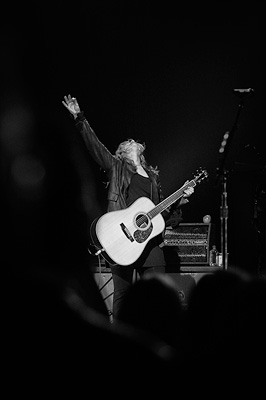 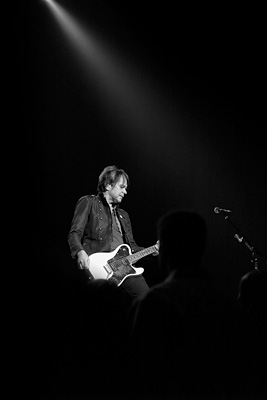 I pulled a 90mm f/2.8 Elmarit lens from my bag and affixed it to the M9. It was the only lens that would let me peep between the heads in front of me. I popped a 50mm f/2 Summicron on the M6 TTL and slung both cameras around my neck. Immediately, ushers flocked to me like crows to roadkill. “Photo pass,” I said, pointing to the sticker on my chest. “Photo pass,” I said to the next. “Photo pass.”

The concert began and all those ushers who were so concerned that I might block someone’s view were now willingly allowing the entire theater to rush the stage, thus insuring that everyone’s view was equally blocked. Unlike a certain considerate and conscientious photographer, Heart’s fans aren’t exactly prone to crouching when up against the stage. So instead of having three rows of seated people to shoot through, I now had seven rows of standing people separating me from the band.

What I find most curious is how a couple of old-school rangefinder cameras can attract so much attention. Every audience member to both my left and right had their cell phones raised, taking photographs. They went unmolested by theater staff. In front of me, I saw several people making video recordings of the concert. They too, were unscathed. Behind me, numerous compact enthusiast cameras snapped away. No problem. But me with my rangefinders? Problem. I’ll admit that I don’t quite understand why someone shooting stills with Ilford Delta 3200 black & white film is of greater concern to security personnel than someone capturing digital video and audio. Nor (as long as I’m on a rant) do I understand why none of these same audience members ever bother to photograph the opening act. Don’t these musicians deserve a little photo luvin’ too? 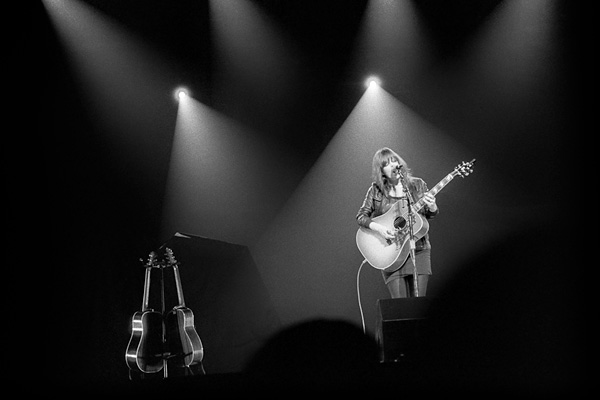 OK. I’ve calmed down. What was I writing about? Oh yeah — shooting concerts with a rangefinder. My trepidation melted almost instantly. The Leicas and I worked as one, just like we do on the streets. The cameras let me shoot what I want, how I want, when I want. Of particular benefit were the wide field of view (which allowed me to react to things happening outside the 90mm framelines), the lack of viewfinder blackout (which helped keep me in the moment), and the viewfinder’s infinite depth of field (which, when shooting wide open, really helps one survey the scene for shot options). In retrospect, the only thing I would have done differently would be to swap lenses — putting the 90 on the M6 and the 50 on the M9. The reason is dynamic range. Specifically, there’s a lot of it under concert lighting conditions and, since I’m always exposing manually, the extra exposure latitude of the black & white film would have saved a couple shots that blew the highlights in the M9. But, alas, we can’t go back in time — otherwise I’d probably reshoot all my past concerts with a rangefinder. Come to think of it, there are many things I’d do differently, but that’s definitely not a topic for the Leica Camera Blog… 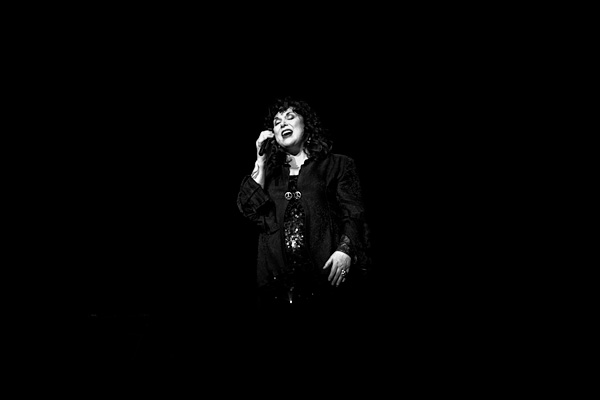 grEGORy simpson is a professional “pounder.” You may find him pounding on his computer keyboard, churning out articles for both the Leica Blog and his own blog at photography.ultrasomething.com. Or you may hear him pounding on a musical keyboard, composing music and designing new sounds. Frequently, he’s out pounding city pavement and photographing humans simply being. This third act of pummeling has yielded a new photography book, Instinct, which has given Mr. Simpson a fourth vocation — pounding on doors in an attempt to market the darn thing. Follow these and other photographic exploits on the ULTRAsomething facebook page.