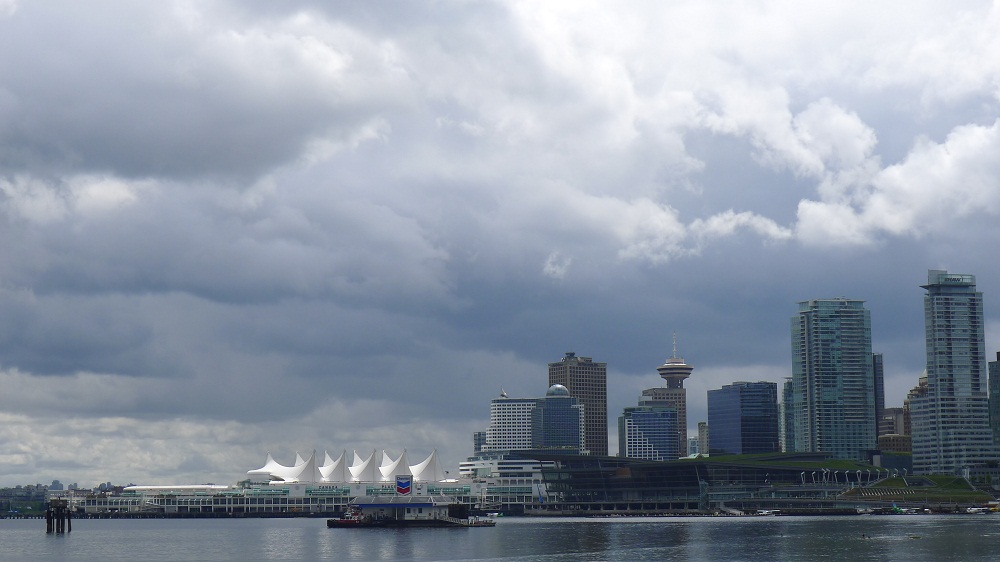 Answer to “Where am I?” : Vancouver, British Columbia

I arrived at Vancouver Airport at 11 pm a fortnight ago sporting just a pair of shorts and a T-shirt. I charged off the aircraft, whipped through customs and immigration in a record twenty minutes and stumbled into a freezing thunderstorm. I had flown in from San Francisco where it was wonderfully warm and sunny. I wrongly assumed that Vancouver – just two hours north – would be at least dry!

Rather than taking a cab, I took the SkyTrain (a driverless high-speed rail link) to the Waterfront. I then proceeded to take a wrong turn three times before finally arriving at my hotel.

The city was plastered with “Go Canucks” posters, flags and billboards. Turning on the news and even that was dominated by the forthcoming Stanley Cup finals. I have never been to an ice-hockey match. I hear it is half Torvill & Dean and half Mike Tyson … as this is published, either the Canucks have won the Cup (Go Canucks) or the Bruins have levelled the series … with just the decider to play.

I love Canada. Reasons I love Canada: 1) If I hold the door open for someone there, they say “thank you”. 2) When I say “thank you”, the recipient does not go “uh-huh” and 3) when someone says “have a nice day” they mean it! In Vancouver, the girls are pretty, the city boasts one of the most multicultural populations on Earth, the air is fresh, the scenery is stunning and the cuisine is superb. The only downside is that it is one of the fittest cities in the developed world. I have entered the 2012 New York Marathon and I am trying to go jogging every day. I did go for a trot around Stanley Park, but was overtaken by elderly ladies and gentlemen three times my age. How depressed did I feel?

I once met Tom Welling at Los Angeles Airport; he was taking a flight to Hawaii. I did giggle when I saw him checking in luggage. I mean, surely Superman doesn’t fly commercial or need to check-in luggage. Oh – I mention this anecdote as Vancouver is now one of the top filming locations in North America (hence nickname Hollywood North) and one of the shows filmed there was Smallville.

The question I am asked most is, of all the places I have ever visited, where would I like to live.  Without sounding too dark now, for me, actually it is where I would like to die. Just a one hour helicopter flight north of Vancouver is the private island of Sonora It is heaven on Earth and absurdly a place where I would not mind breathing my last, maybe not for a little while though!

Varun Sharma is the host of Inside Luxury Travel – a television show that focuses on high-end travel. The show airs in over 160 countries, in 18 languages and is beamed into 390 million homes worldwide. He has now stayed in over 500 luxury hotels & resorts … and has in the past year flown in a fighter jet, gone diving – without a cage – in Tiger Shark infested-waters, had dinner with a dingo and has cooked with over 50 Michelin-starred chefs! He likes nothing better than playing a round of golf with his pooch Gemima by his side, cigar in mouth and flask of single malt Scottish whisky to hand!