As we announced last August, Leica Camera served as the new sponsor and partner of the international photo contest “UNICEF Photo of the Year”. This annual contest has been held by UNICEF Germany and GEO Magazine since 2000. Karin Rehn-Kaufmann, Creative Director of the Leica Gallery in Salzburg, also joined other renowned personalities as a jury member for the competition. The award is given to photographers whose work captures the personalities and living conditions of children around the world in an outstanding manner. This year that photographer is Kai Löffelbein who was awarded the renowned prize for his photo report on a toxic waste dump called Agbogbloshie, situated near Accra, the capital of Ghana. Here we share an excerpt from Kai’s speech, which underlines the consequences of the shipment of tens of thousands tons of electronic waste to Africa. 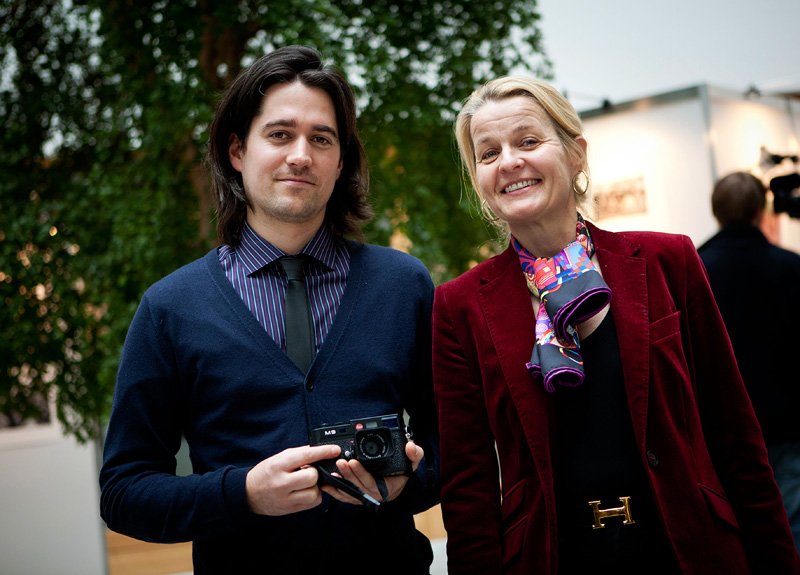 The UNICEF Photo of the Year award is a special prize with the power to bring critical reports on topics which tend to be more or less ignored by the media.

As most of us know, the media landscape is in a stage of change. Do not worry – I am not going to discuss this topic here. Nonetheless, I have to mention the fact that many photographers who long to produce their own photo reports become more and more dependent on prizes of this special nature. This is a further reason why I would like to thank UNICEF, Geo, and Leica for their wonderful and appreciative support by awarding me this price.

The world has great problems indeed and, sad to say, many of them. One of the problems that must be solved is the problem of waste and of electronic waste especially, even more so because we are living in a world of high technology. On the one hand, electric appliances include substances that are highly toxic to the people and the ecology. While on the other, they also contain valuable materials that could be recycled like copper, silver, gold and even platinum.

I personally own several PCs and monitors, some digital cameras, five or six hard drives, recorders, microphones, mobile phones, one new printer and an old one stored in a cupboard. So one could say that I am very much involved with electronics due to my profession.

Nowadays, a work station without a computer has become unthinkable. Private households replace their computers regularly after some years and companies, as a rule, after three years. We are surrounded by electronics in our private and working lives.

According to a United Nations evaluation, up to 50 million tons of toxic electronic waste accumulate annually in the whole world. With the voluntary ratification of the Basel Convention in 1989, the countries are forbidden by law to further export toxic electronic waste to countries that are not members of the Organisation for Economic Co-operation and Development (OECD). Despite that, Germany, for example, ships up to 100,000 tons of electronic waste overseas per year. In order to bypass the conditions of the Basel Convention, this merchandise is declared second-hand-goods or even development aid. Trading with electronic waste has become a lucrative business in which millions are earned while professional recycling is quite expensive.

In September, I travelled to Ghana. Ghana is, apart from China and India, one of the countries to which most of the electronic waste is being shipped. Some of my photos show the E-waste dump. This dump is situated in the midst of Accra, in the neighbourhood of Agbogbloshie. Here, electronic appliances that are no longer functioning are being recycled by hand in the most primitive of conditions. It is estimated that less than 30 percent of the electronic appliances imported in Ghana are operative and actually end up in second-hand shops. The other 70 percent are sent to the dump to be salvaged there. The dump where I was encompasses three to four square kilometres; the river separates it from a slum that is fittingly called “Sodom and Gomorrah” by the locals. Some older people remember the time when the river was a living watercourse full of fish. Today, only monitors and other electric devices are floating in it.

Almost all the people working at the dump are living in “Sodom and Gomorrah”. According to my estimation there may be around 800 people working there; more than half of them children and teenagers.

Some journalists I talked to during my preparation for this voyage called the dump a gateway to hell. Before I came there I had no real idea what was meant by this, but that changed when I saw the dump for the first time. Immediately, those words from my colleagues came to mind. Everywhere in the dump, small to middle-sized fires are burning.

Under unfavourable climatic conditions, the smoke does not dissolve in the atmosphere, but rather it hovers in the air like fog. In this case, one cannot see further than two metres. And while one is standing in the fog seeing almost nothing, all of a sudden people eerily emerge from the smoke only to be absorbed again by this billowing fog. 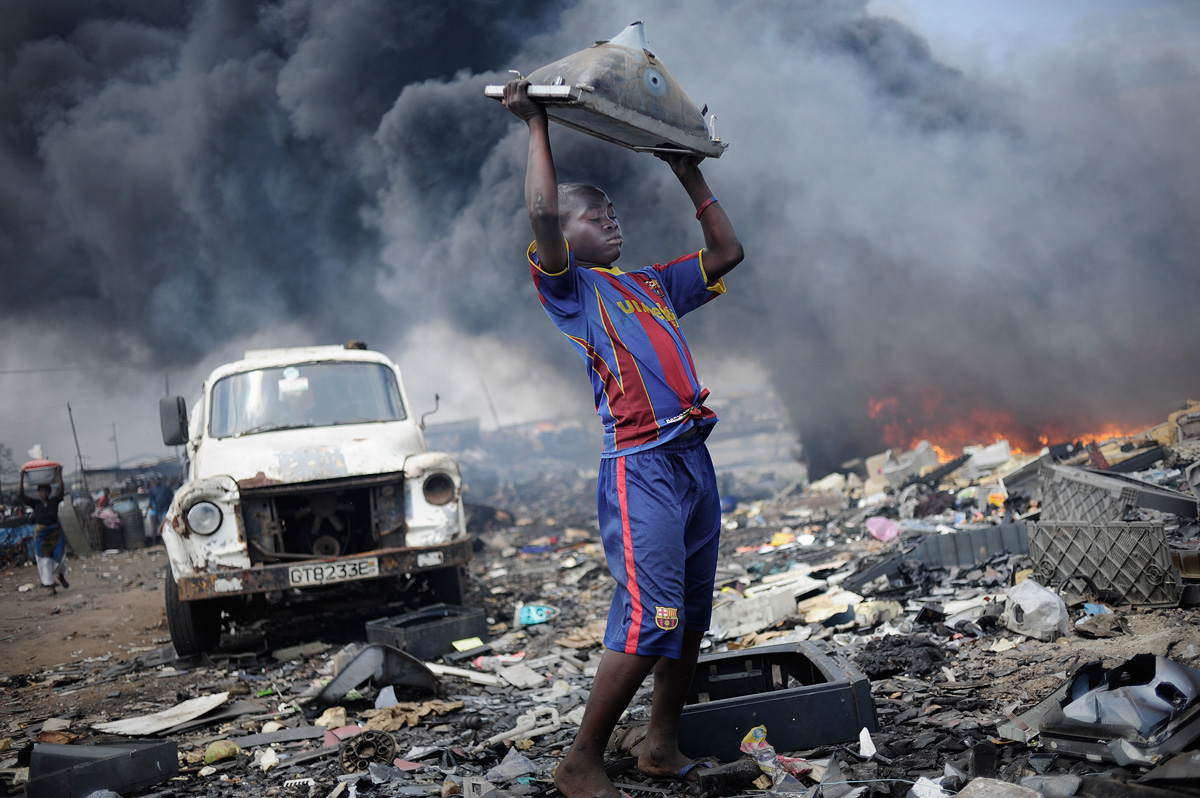 On the dump, a clear hierarchy has developed. At the lower end of this hierarchy are children like the little boy on the UNICEF award-winning picture. The boy is lucky – he has found a monitor from which the parts had not been completely extracted by the other workers at the dump. In the moment I took the photo he is lifting the heavy device to smash it to the ground in order to get hold of the aluminium frame. The dump is full of children roaming about and searching for some electronic waste that other workers have discarded negligently. 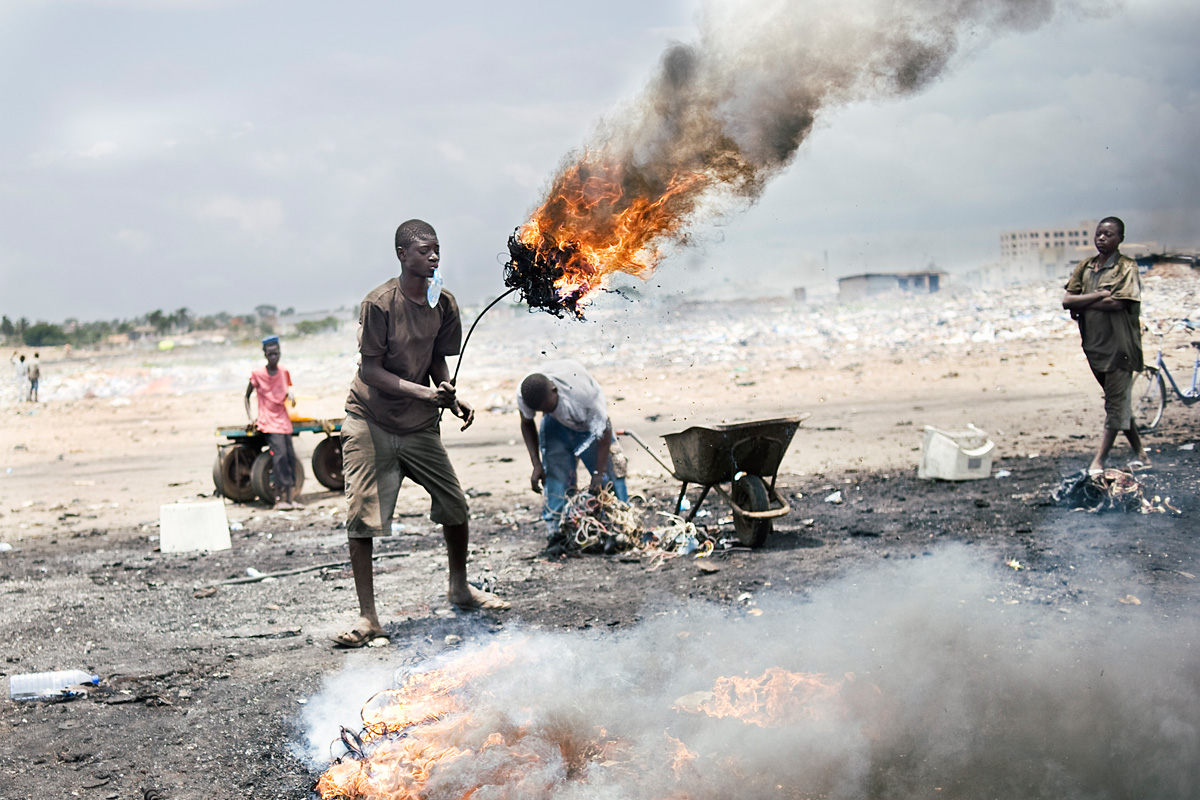 One of the worst tasks is that of the “burners”. These are the kids that separate copper cables from their rubber coating by throwing them into the fire. The fumes resulting from this process pose a serious health risk not only to the burners themselves, but also to the people living in the neighbouring slum. The dump is not a separate, eschewed area, but rather it is deeply rooted in the people’s everyday life. The dump is not just the working place of the people who are recycling the waste. Women come here to sell food and fire water to the workers and herdsmen come here to let their cattle graze. Not far from the dump is one of the biggest food markets in Ghana.

Near the dump I talked to a doctor who offers medical aid to the people working there. He confirmed that many people come to him because of acute troubles like headaches, vertigo, itching or skin spots that are directly caused by the E-waste dump. According to a Basel Action Network/Greenpeace study, the toxic smog is likely to cause sterility, asthma, cancer and neurological disorders.

Some months ago, scientists from the United Nations took soil samples. Their findings have been alarming. They found a mixture of lead, cadmium, zinc, chromium, nickel, chlorinated dioxins and other chemicals. The quantities of chemicals in soil are up to 50 times above the maximum allowable concentration. In Europe, a few millionths grams of lead are considered a health risk.

Children in some cases of no more than 6-years-old participate take part in extracting the materials. They earn less than 20 US dollars per month. The majority of the people working there are between 12 and 30 years old; they work 10 to 12 hours a day. But despite their hard labour they live in extreme poverty.

I have been most impressed by the vital energy and optimism of the children and adolescents. Because of the harsh and inhumane living conditions at the dump, the children have very little time to play, but nevertheless, even during their work, that magical moment of childhood makes its appearance time and again.

You can find more information about the UNICEF Photo of the Year awards at www.unicef.de/foto and you can see more of Kai’s work on his website, www.kailoeffelbein.de.