Gul Chotrani: In Search Of The Universal Human Experience, Part One

The Leica camera Blog Uncategorized Gul Chotrani: In Search Of The Universal Human Experience, Part One

Born in the late 1950s and raised mostly in Singapore, Gul Chotrani studied business and economics during the 1980s, worked as an analyst/economist and later in investment banking in the UK. Afterwards, he spent several years in academia, teaching economics and finance in Singapore and South East Asia, served as a consultant/advisor in trade, finance and development issues, and also participated in technical cooperation programs with several less developed countries in Asia, on behalf of the Singapore government, the Asian Development Bank and the World Bank. He earned his MBA from the University of Chicago.

It was through these channels that he was able to re-ignite his passion for photography. Among his most memorable photographic experiences was traveling to Afghanistan and Pakistan in 2006 where he was able to mix fairly freely (though escorted) with the local populace and take photographs. ”The greatest challenges most photographers face is absence from home,” he observes “and working out of the home allows me to further pursue my own photographic interests, while still keeping contact with my family. I deeply admire Sebastiao Salgado’s experience as an economist and his use of the camera to deliver the story of poverty, displacement, hardship, and I would be honored, in some small way to emulate his mission.” Here is part one of the story of Gul Chotrani’s creative quest.

Q: What camera and equipment do you use?

A: I have a Leica S2 and a Leica M9 with a complete range of lenses for both, an X1 for casual use and Nikon D3X especially for use with a zoom lens and for shooting outdoors.

Q: Do you concentrate on a specific genre?

A: I don’t believe my work falls into any definite genre and I’m always experimenting. It’s really a combination of everything, but I’m currently leaning more toward travel, landscapes and portraiture.

Q: Can you tell us a bit about how you first got started with photography?

A: I started photography as a hobby when I was at university in England in the early 1980s, doing landscapes, but stopped pursuing it since I couldn’t afford the ongoing cost. My photographic instincts were revived after travelling in New Zealand in 2002 and I began shooting again with a basic digital camera. At this point I was driven to explore digital imaging and technology and all it could offer, then quickly climbed up the ladder into serious photography. I always regarded myself as a serious enthusiast photographer, driven by the fascination and curiosity for culture and nature rather than a professional photographer that is more likely to be driven by the expectations of his audience and the ability to sell his images. In those terms, I don’t consider myself that much of a professional.

Q: Did you ever study photography or have you just developed your skills from experience?

A: Photography has always been a solitary pursuit and I taught myself by looking at all those excellent galleries available on the Internet. That made a dramatic difference. I would ask myself questions like “How did that photographer do this or that to produce the image in front of me?” That’s what induced me into becoming more creative and I just challenged myself to experiment by trial and error. However, this developmental process is far from complete in any sense. For example, I have always shot handheld using natural light. Even now I very rarely use tripods or supplementary lighting. However, over the past two years, I participated in workshops with two renowned photographers, Jay Maisel in New York and Steve McCurry in India, and both made great impressions on me.

Q: How did you come to use Leica cameras?

A: Through experimentation. I’ve always been interested in the different modes and formats of contemporary digital photography and reading a lot about rangefinders is what led me to the Leica M. I deferred purchasing an M8, which turned out to be fortunate, since the M9 and the S2 were announced a few months later! 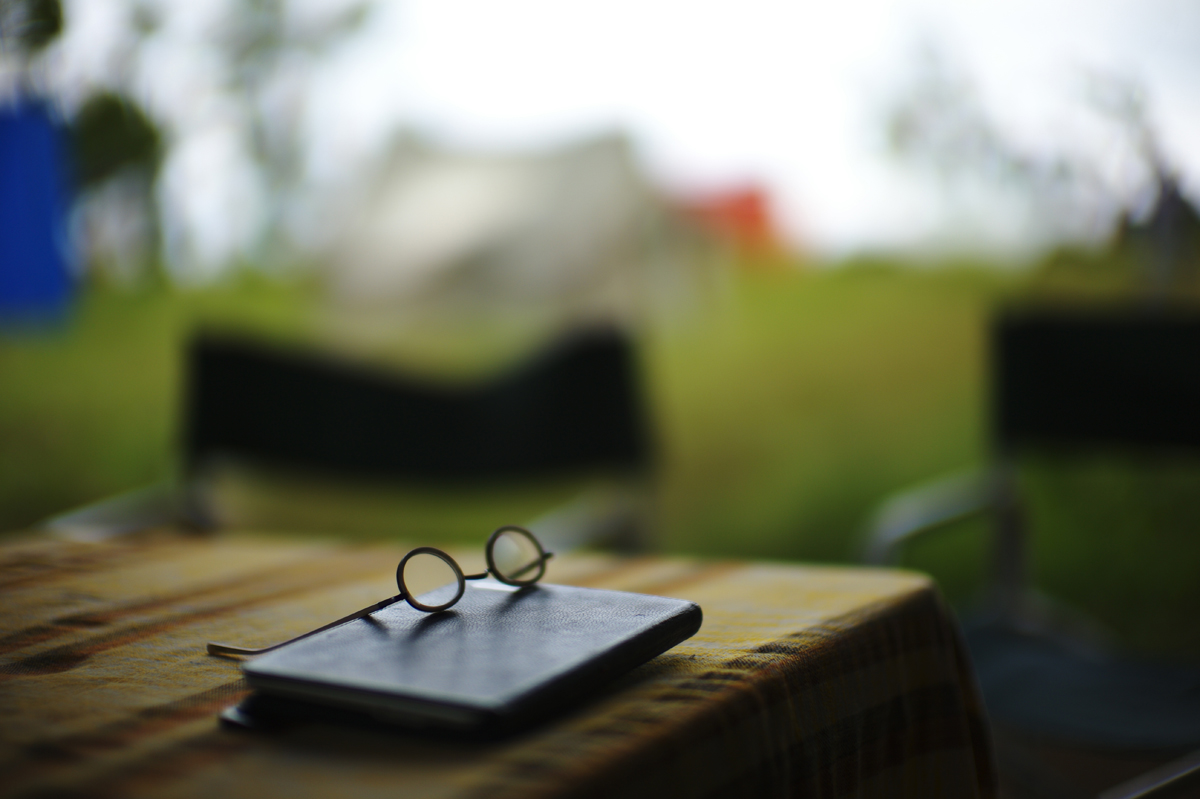 Q: Your beautiful still life of a pair of glasses and a book on a table with very shallow depth of field and a beautifully soft background of bright colors seems to tell a story without being very specific. Can you tell us what it means to you, why you composed it in this matter-of-fact way and what you are trying to convey to the viewer?

A: That very interesting picture was taken almost by accident while I was testing the M9 with the Noctilux at base camp. The composition shows a pair of spectacles, resting on a book, in a very primitive setting, and I’m very proud of it because it has a timeless quality and could very well have been taken in the early days of photography, which is why I’ll probably make a monochrome copy of it. I didn’t really see the significance of that shot until several weeks later when I saw it in full screen size. On reflection, it took on a life of its own and remains an enigmatic capture of the future in the past. The picture tells the story that is in the viewer’s mind.

Q: What does photography mean to you?

A: Photography is always a private affair with me — I don’t usually exhibit or promote my photography and rarely enter competitions. I am not hungry for public accolades and I derive satisfaction from what I would regard as reasonable creativity. That way I pursue my own expression on my own terms. Happily, many people who have seen my world on pbase.com/gbc have been very supportive and encouraging.

Q: You mention that you use a Nikon DSLR as well as a Leica M9 and a Leica S2. Do you find that the M9’s unique characteristics affect either the type of images you shoot, or the look of the images captured by that camera? Is there any difference, operationally or in terms of the results, between the pictures you shoot with the Nikon and the Leica S2?

A: Images from the M9 will speak for themselves, but fundamentally, they’re the result of superlative optics, namely the Leica M lenses. I only began using the Leica in early 2010 and the M9 rangefinder camera was a very new experience for me. In the beginning it was frustrating to achieve the images I wanted and I almost gave up.

What inspired me to turn to rangefinder photography was a remark about the Leica rangefinder camera made by a photographer who operates a very popular technical and product website. He said, “It makes you think before you shoot”. That statement is true to the Leica’s character because none of the picture parameters — framing, focusing, or exposure — can be taken for granted. It’s up to you to work out your aperture, shutter, ISO combination and to create the impression you have in your mind. Eventually, after much practice, trial and error, the penny drops and the creativity starts to flow.

In contrast, the mainstream Japanese DSLRs are so fully comprehensive with autofocus feature, driven by numerous tweaking features controlled by menu or tiny buttons, that it takes most of the thinking away. I spent the better part of several years using such DSLRs, until the rangefinder abruptly changed the way I look at subjects. This is not a criticism of DSLRs; they remain a vital part of my equipment because they also serve areas that a rangefinder cannot reach when using a zoom lens or for high-speed action photography. The Leica S2 is very similar to DSLRs except for its larger, higher-resolution sensor and functional simplicity. When I’m on a serious photography trip, my total gear consists of three bodies (Leica M9, S2 and Nikon D3X) with perhaps two lenses for each, all meant to complement each other.

Q: Which types of lenses did you find most useful for your Ethiopian project and did you find any difference between using prime (single focal length) lenses and zooms?

A. Leica excels with their primes, so they’re great for portraits, landscapes and street shooting with good, natural ambient light in hand-held situations. My favorite lenses in the villages tend to be the 24mm f/1.4 and 35mm f/1.4 for the M, and mostly 70mm f/2.5 (~56mm in 35mm format) for the S2. The Nikon fills the gap for zooming in more difficult situations and that’s when I use the 24-120mm f/4 and 70-200mm f/2.8.  While the Leica M9 takes a bit more patience to capture precisely what you envision, it is also more fulfilling in its creative achievement.

Camera gear with long lenses is intimidating to the subject as you get closer, so that’s when the Leica equipment takes over. In the field, two camera bodies are always within reach, one in hand and the other always tucked away. Camera equipment appears intimidating to tribal folk and discretion always makes for better engagement with the subject. It is terrible to see the occasional tourist with several cameras hanging over his body and shooting away like a machine gun.

You can see more of Gul’s images at pbase.com/gbc and you can read more about Gul’s journey to the Omo River Valley in Condé Nast Traveler.