In choosing a lens, you have much to consider. Cost is a factor. So is the character of the lens. Then there’s the sticky issue of which focal length to select. Why choose a 35mm lens over a 50mm, for example? Is the field of view that important when the focal lengths are so close together? I didn’t think a small difference would matter that much — until recently.

I had never used a 35mm lens on my M9, so Leica offered to loan me a 35mm Summilux for a week. We arranged that I would use it for my trip to the Consumer Electronics Show (CES) in Vegas. Most of my time there was consumed with CES, though I kept the M9 with me throughout the week. I decided to use only the 35mm during the trip, so that I could have a better sense of how it might work for me going forward. I tend to shoot more by instinct than design, so I just shot what seemed interesting. I would leave until later whether the results might be markedly different from my previous Vegas photos.

What was obvious as soon as I mounted the 35mm Summilux on my M9 is how much smaller and lighter it is than my 24mm Summilux. The 35 lux is slightly heavier and longer than my 50mm Summilux, though the 35mm and 50mm lenses have the same diameter. Of course, you don’t have to use an external viewfinder with a 35mm or 50mm on an M9, as you do with a 24mm. What I liked about the 35mm over the 50mm was the larger image in the camera’s viewfinder. I wear glasses and find that the 28mm frame lines can be difficult to see unless you move your head from side to side. For me, the 35mm frame lines are the best compromise. They’re quite large, which lets you see a fair amount of detail. Yet they’re not so large that they’re difficult to see without moving your head.

Going over the photos from the 35 lux, after having processed them in Lightroom, I was struck by how different conceptually they were from my previous Vegas shots. More than before, they seemed to explore the theme of stillness. Maybe it’s where I am creatively at the moment, or it could be a random theme that popped up on its own. Or there could be a third possibility. It relates to where the 35mm focal length stands in relation to the 50mm focal length and our normal field of view.

Because a 35mm lens slightly enhances what we normally see, it invites a more subtle interpretation of everyday events. A 50mm lens suggests that this is what you could have seen for yourself, had you been there. It’s reality as we know it. A 24mm or 28mm suggests a somewhat curved reality — a reality that appears to be in flux with a frame of reference that seems reluctant to settle in place. A 35mm perspective holds a special position in between. It seems to hold time still, as though the scene is carefully balanced between life as it is and life as it could be. Think of it as the subtlest of focal lengths, because it enhances the perspective so gently that you don’t realize it without careful study. 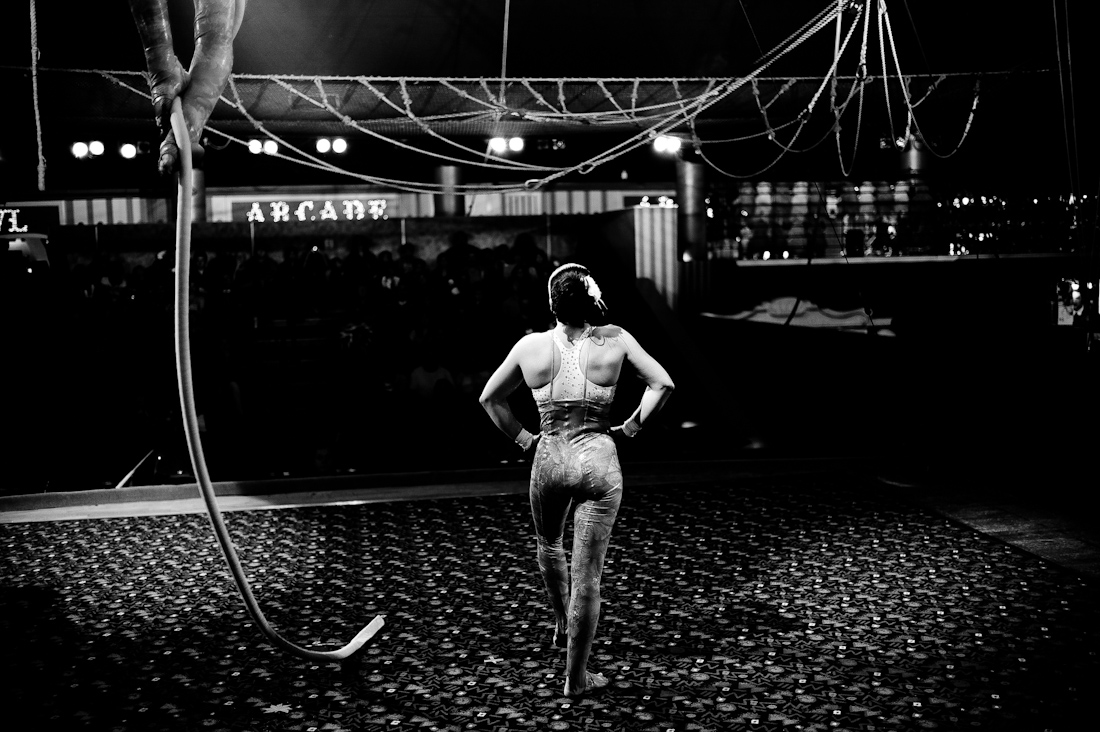 An example of this phenomenon is the photo titled Golden Duo. Yes, it would look somewhat similar if shot with a 28mm or 50mm. Yet it seems to be transfixed in time, perhaps more so than with the other two focal lengths. Because the view has only a slight wide-angle perspective, the effect is understated and more lifelike. It’s more powerful because the perspective skirts along the outer edges of reality. 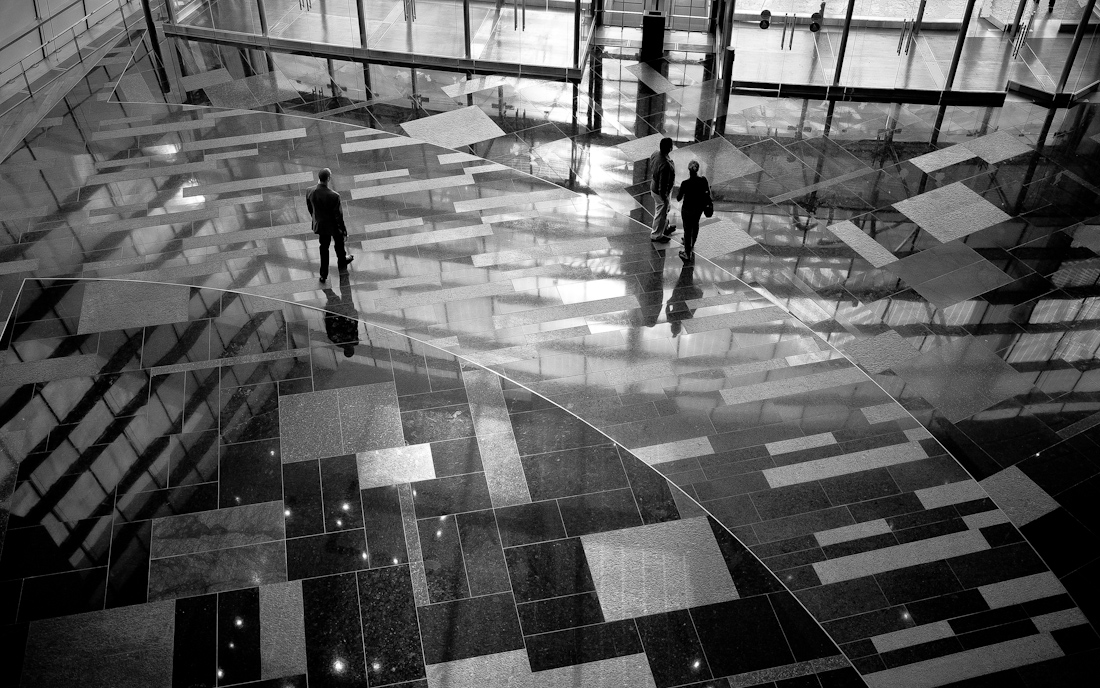 Similarly, the photo titled Aria Lobby succeeds because it shows a heightened reality while remaining well within the realm of possibility. This photo reminds me of the closing scenes from the movie E.T. The lobby at the Aria hotel in Vegas is a fascinating place to photograph, as the light and reflections shift throughout the day. 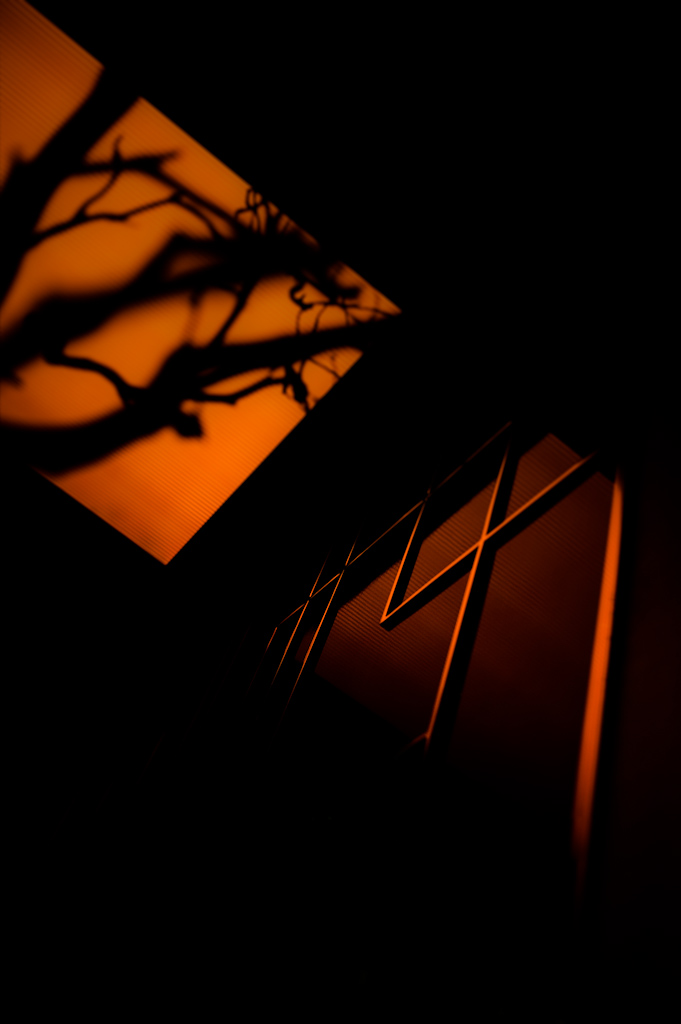 Every photo is a slice of time. That’s why movie people sometimes refer to photos as “still pictures.” Photographers often seek to enhance that sense of stillness by striving for a barely perceptible unreal quality. That unreal quality might convey a new awareness of the visual relationship between forms. Or it might convey a new understanding of how the forms might function in motion. With the photo titled Night of the Hunter, the two large blocks of abstract forms seem to have a reciprocal association, as opposed to being purely random. After processing the image, I imagined that it could serve as a poster for the 1955 movie, “The Night of the Hunter.” 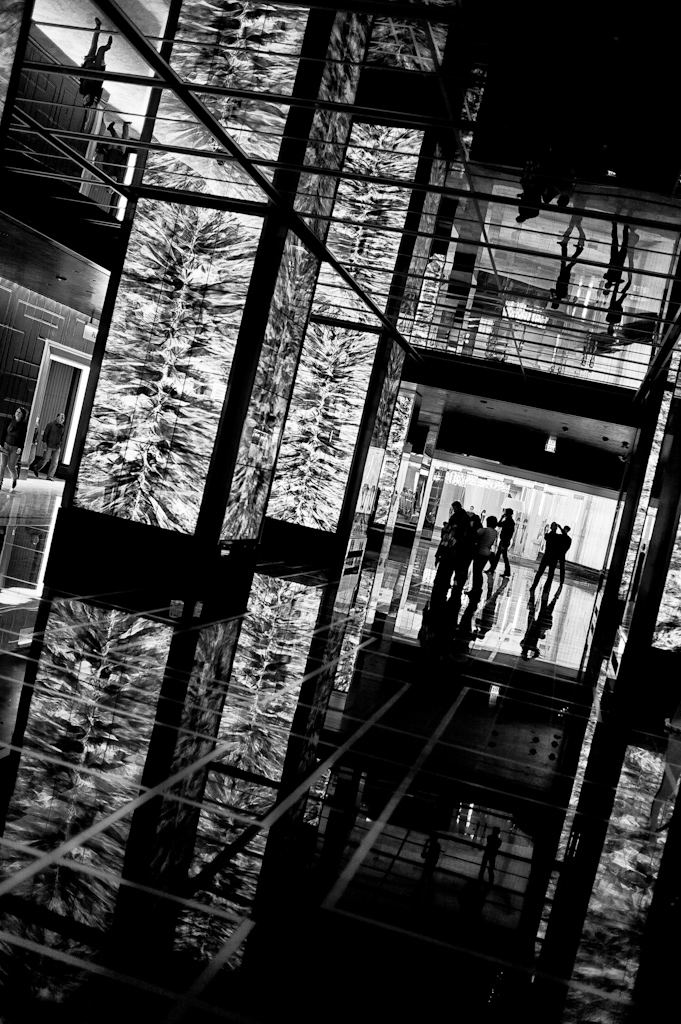 With the photo titled Cosmopolitan Lobby #2, the people appear to be frozen as if encased in amber. Here the reflections and silhouettes heighten the sense of enclosure with the various elements neatly segmented into geometric compartments. With both images, I’m not sure another focal length could have conveyed the same sense of stillness in time.

I realize that I may be full of hot air with my theory about the inherent stillness of the 35mm focal length. In the end, it doesn’t matter as each photographer has to find his or her compatible focal niches. I was very impressed with the 35mm Summilux, both for its remarkable image quality and ease of handling. My favorite lens when I was shooting with an M8.2 was a 28mm Summicron, which would be the equivalent of a 36mm lens on an M9. I don’t know why I hadn’t realized it before, but it may have been the 36mm equivalent focal length, as well as the character of the lens, that had attracted me to it. I now have a 35mm Summilux on order with the expectation that it could become a favorite lens for my M9.

This is a guest post by David English, who has a day job as a technology writer. He has written articles for CNET, Film & Video, PC Magazine, Sky and other publications. David started shooting with a Leica camera in March 2009 using an M8.2 and moved to an M9 in November 2009. You can see his photos at www.protozoid.com. His main website is www.davidenglish.com, and his classic film blog is www.classicfilmpreview.com.