The Postcards from America project brings Magnum photographers together to work collaboratively documenting issues and people across the United States. Most recently, the project focused on the United States’ presidential election with a temporary ‘bureau’ set up in Miami, FL. The purpose was to look at the election through the perspective of people who would not or could not take part in the voting process. Magnum photographer Bruce Gilden provided us with his own insight into his work on the Postcards project.
Q: You’ve always had a fascination for observing human behavior, but evidently your passion for photography grew after you saw Michelangelo Antonioni’s classic film Blow-Up, where the protagonist is an engaging photographer. Can tell us why seeing Blow-Up inspired you to enroll in the School of Visual Arts (SVA) and to pursue photography as your life’s work?
A: I didn’t particularly like Antonioni’s Blow Up. But at that time photography was in, so I took the course at SVA and I was hooked.
Q: Many of your images from the Postcards from America series are powerful frame-filling close-up character portraits that seem to be brutally and empathetically honest. Do you agree, and what were you trying to achieve with these images?
A: I’m trying to make strong, honest photographs of people who are many times not your average person and also are visually interesting to me. 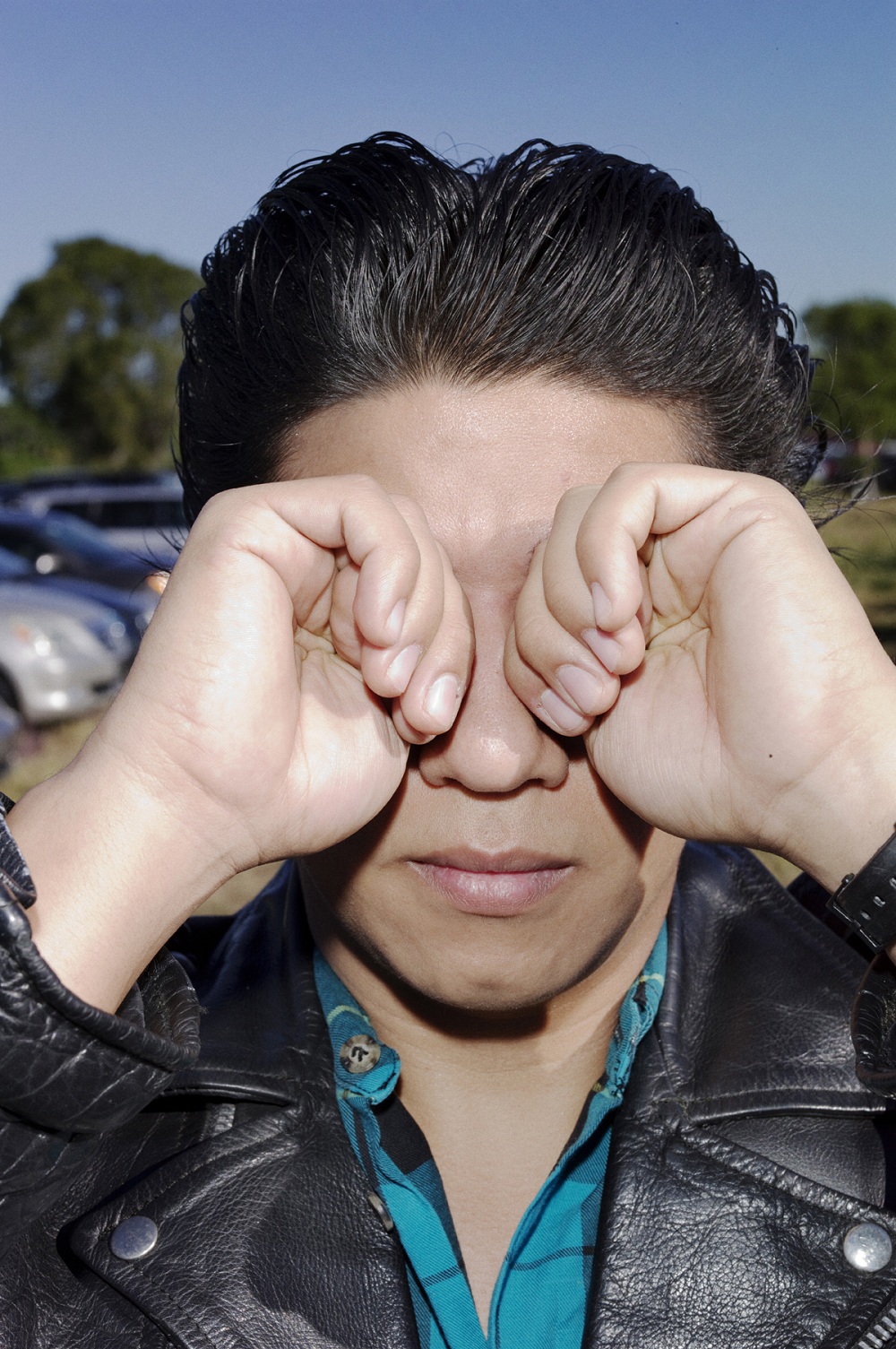 Q: The portrait of a young man in a leather motorcycle jacket facing the camera with his hands held up in front of his eyes violates practically every so-called “rule” of portraiture, but it packs an emotional wallop. Why do you think this is so, and can you tell us how and why you took this shot?
A: When I saw the young man, I loved his hair and his leather jacket. But when I took his portrait, his look wasn’t strong enough for me so I asked him could you put your hands over your face. 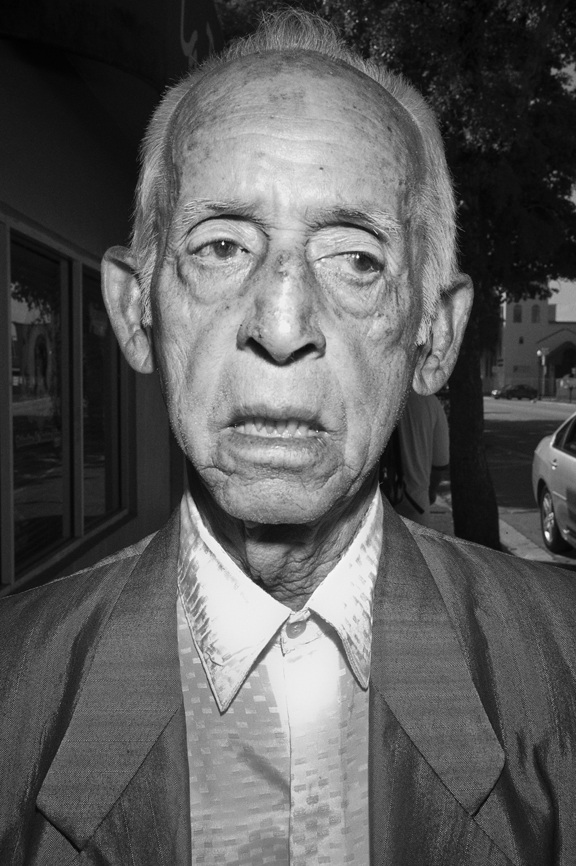 Q: It is entirely appropriate that your classic head-and-shoulders portrait of an elderly wrinkled gentleman facing but looking away from the camera is presented in black and white, and also includes details of his shirt and jacket. Can you give us your thoughts on why you composed it in this way, why you think it is so revealing, and why you output the image in black and white?
A: I composed it in this way because the man was very strong. He had a lot of character, and the reason it’s in B&W is because I used the Monochrom camera. After the first few days in Florida, I shot all my pictures in color with the Leica S2 camera. Everything just fit: the color, Florida, flash and the subjects. It was a perfect match. 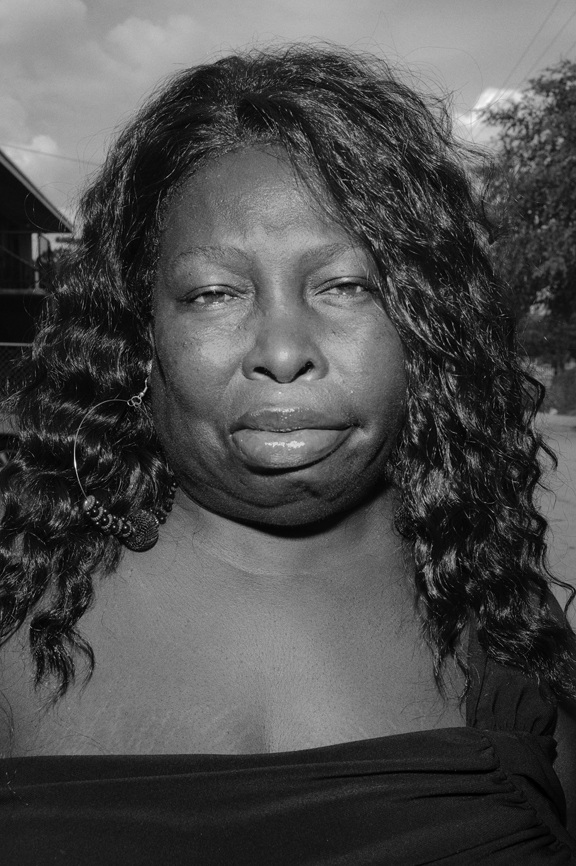 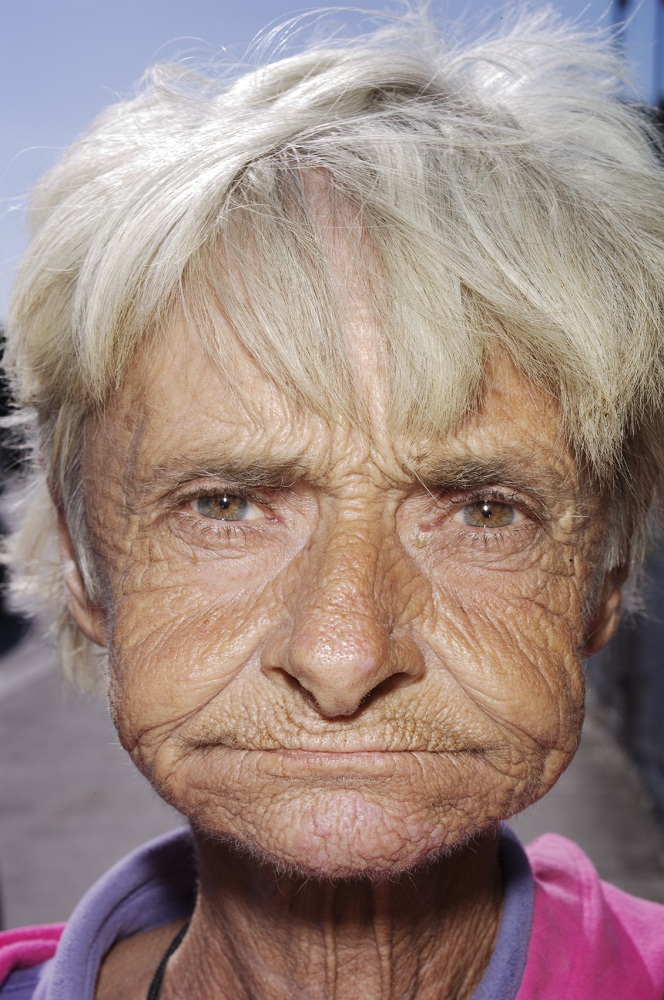 Q: There is something both amusing and tragic in your head- shots of two women, Mrs. Jones and Sherry, and both seem to have your signature combination of irony and empathy. Can you comment on this, and also tell us why you chose to present Mrs. Jones in black-and-white, and Sherry in color?

A: Mrs. Jones was also shot the second day in Florida. Sherry was 3 days later and by that time, I knew how I was going to shoot this project in color. 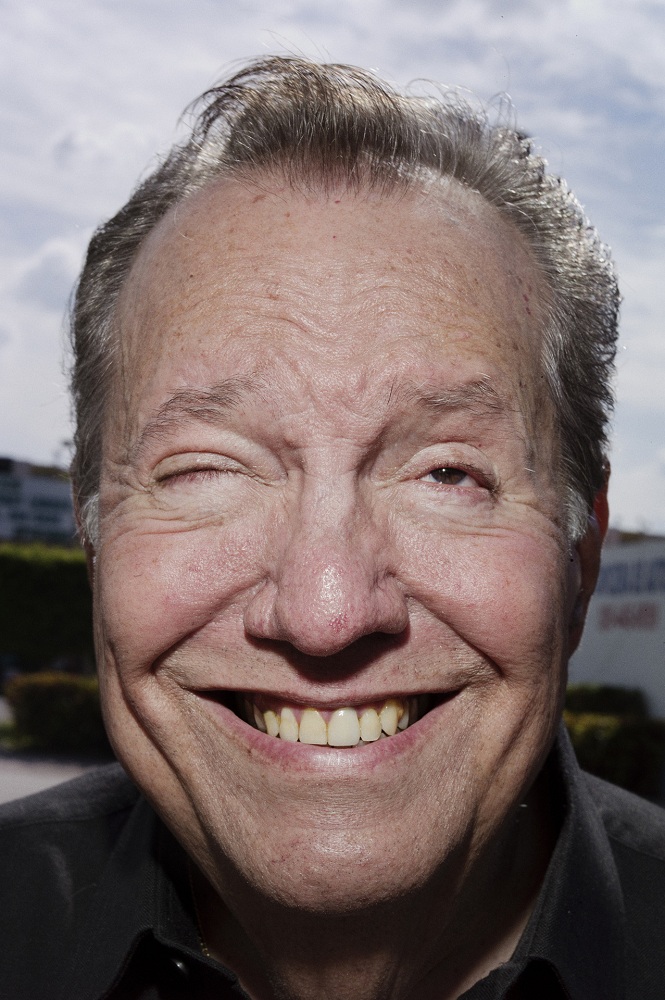 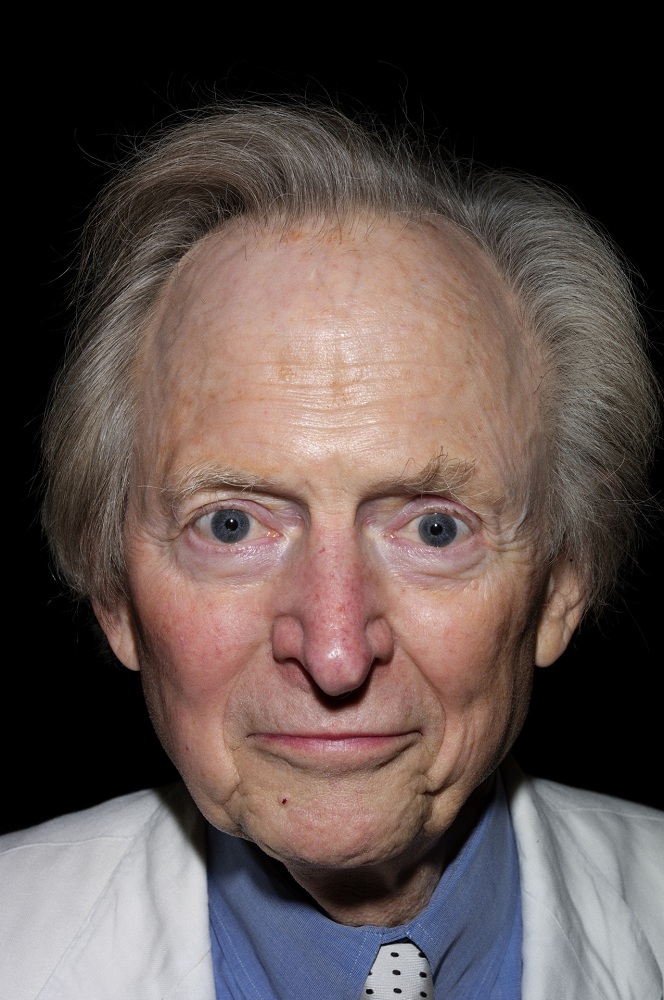 Q: The portraits of two men, Mr. Valls and Tom Wolfe, seem to have more of a happy and jovial mood than your other portraits. Was this a conscious decision on your part, or does it simply reflect the character of the individuals as you saw them? Also do you think there is any underlying message or idea expressed here?

A: For me, Tom Wolfe looks mischievous – I had one shot with him. In the case of Mr. Valls, it is a fitting portrait of who the man is. I had just seen him smile at somebody and it was perfect. 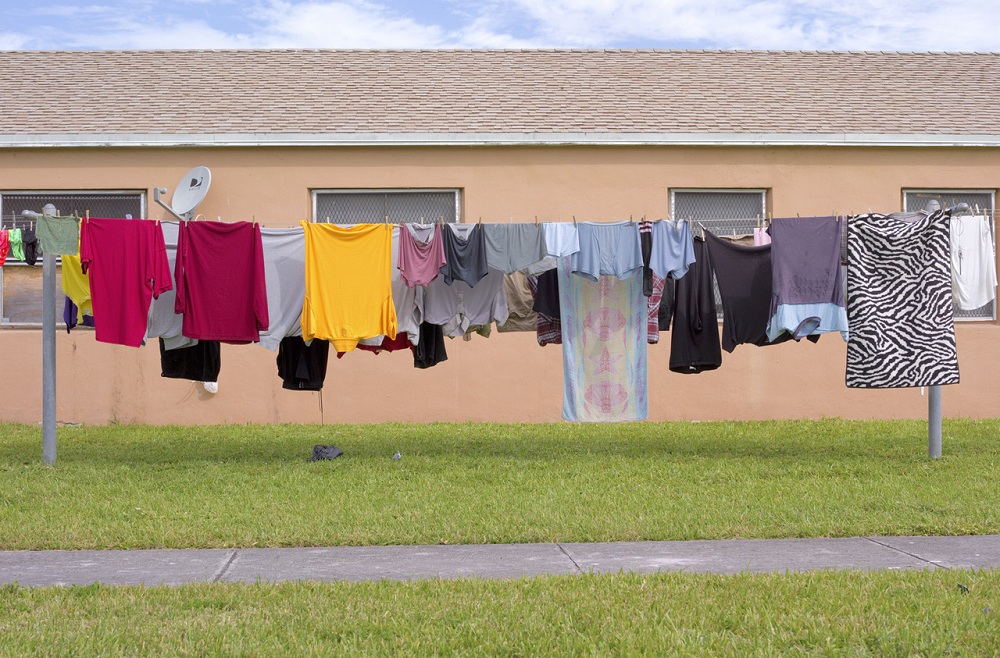 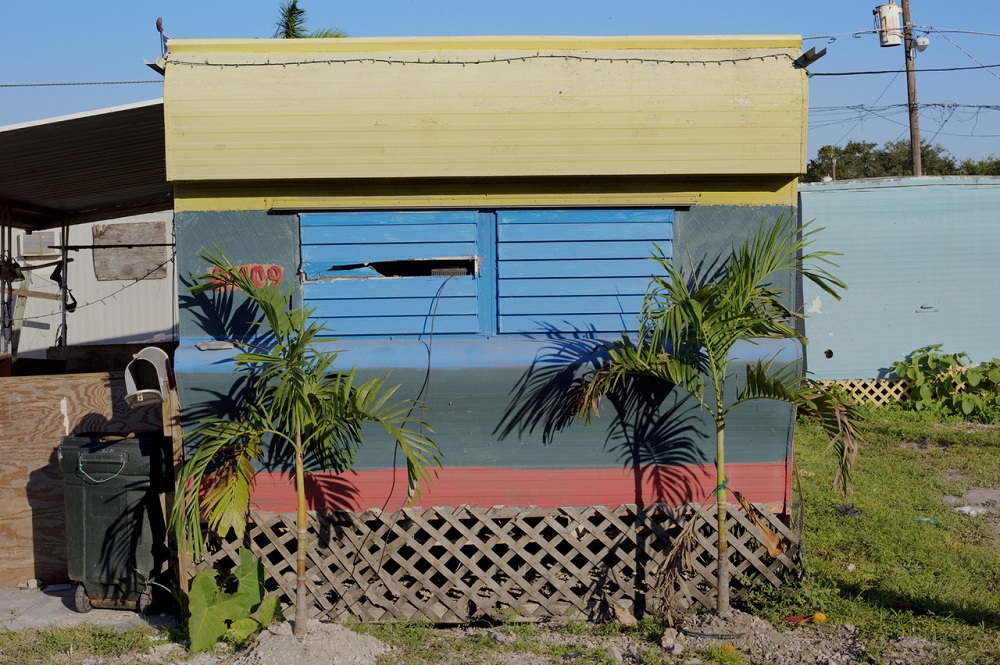 Q: The two “scenic still life” Florida images both emphasize vibrant color and were shot in rather inelegant working class settings. Yet they have a fresh “things as they are” beauty all their own. Do you see this dichotomy, and can you tell us what these images mean to you?

A: I always find beauty in what you call inelegant working class settings. In all pictures, the details make or break a photo.
Q: When did you first become involved with using Leica cameras?
A:I started using Leica in 1977. Once I started, I couldn’t go back. It fits perfectly in my hand, and I used to call it “my child” until my daughter was born.
Q: What equipment did you use for your Postcards images? Also, what is there about the Leica cameras that you find especially conducive to your kind of work?
A: I used an M9 for my Rochester pictures, and for the B&W Florida pictures, I used the Monochrom camera. I used the Leica S2 for color. Being a street photographer and working in crowded areas where the people are generally moving quite fast, the M9 camera is ideal for me.
Q: How has your involvement with Magnum influenced your career and helped your creative process to evolve? What is there about the Postcards from America project that you find the most fulfilling?
A: It’s prestigious to be a member of Magnum. We are a bunch of special individuals. So as far as helping my creative process, I don’t think there was much influence until the Postcards from America project. It is the kind of project that puts you in a place that you may not have thought about going out to photograph on your own, and forces you to find something to photograph. It allows you to create new interesting work, and to try something that you may not have tried on your own, and this is what Magnum should be about. Example, since I used an M9 and I saw the images in color, I realized that color was something that I could do.
Q: Your book Go has been described as “a penetrating look at Japan’s dark side” including the Yakuza and the homeless that “go beyond visual clichés of Japanese culture.” Do you think that “going beyond clichés” is something that underlies all your work?
A: Any photographer that does good work goes beyond clichés.
Q: How see you your art evolving over, say, the next 3-5 years and do you have any new subjects or projects you plan to explore in the near future?
A: Since I have a lot of commissions, I have been doing many facial portraits where I ask the persons if they will pose for me. I just completed a commission in London in black and white using a film camera. It will be a book and an exhibition. I have several other projects coming up this year and I’m continuing my projects on faces, another project on those left behind and a few other projects that are near completion. I have so many things to do; I hope that I have enough time!
Thank you for your time, Bruce!
– Leica Internet Team
Check out Postcards from America on tumblr and Facebook.