Evgenia Arbugaeva was born in 1985 in Tiksi, a small, remote town on the northern coast of Siberia that was also the basis for her Leica Oskar Barnack award-winning portfolio. In 2009 she graduated from the International Center of Photography in New York and has since been working as a freelance photographer.
Evgenia has won various international competitions. In 2012 she was awarded the Magenta Foundation Bright Spark award and received a Magnum Foundation Emergency Fund Grant. In 2013 she was named one of PDN’s 30 New and Emerging Photographers to Watch. She will be presented with the Leica Oskar Barnack Award on July 3, 2013 during the Rencontres Internationales de la Photographie festival held in Arles, France. Below, Evgenia shares the inspiration behind her Tiksi project and explains what a very personal experience it was for her.
Q: What does winning the Leica Oskar Barnack Award 2013 mean to you?
A: Winning this award is a great honor and also motivation to keep going with my photography.
Q: When and how did you decide you wanted to pursue photography as a career?
A: Photography has been my hobby since I was a teenager. After I graduated from the International University in Moscow, I was supposed to work in the advertisement industry but that didn’t interest me much. I decided to go traveling with reindeer herders in my homeland, Republic of Yakutia. I wanted to take some time to understand what I wanted from life. It was supposed to be a short trip, but it ended up to be about one year of traveling with different nomadic tribes. I started to photograph and take it very seriously. I wanted to try to be a real photographer, to put all my energy into capturing this fascinating nomadic life. This was my first project and it was clear for me that I wanted to be a photographer. I decided to obtain some education in photography and I graduated from the International Center of Photography in New York in 2009. Since then I’ve considered myself a freelance photographer.
Q: How would you define your photographic approach?
A: I am inspired by the beauty and strangeness of the world so I take my time. All my projects are long-term. 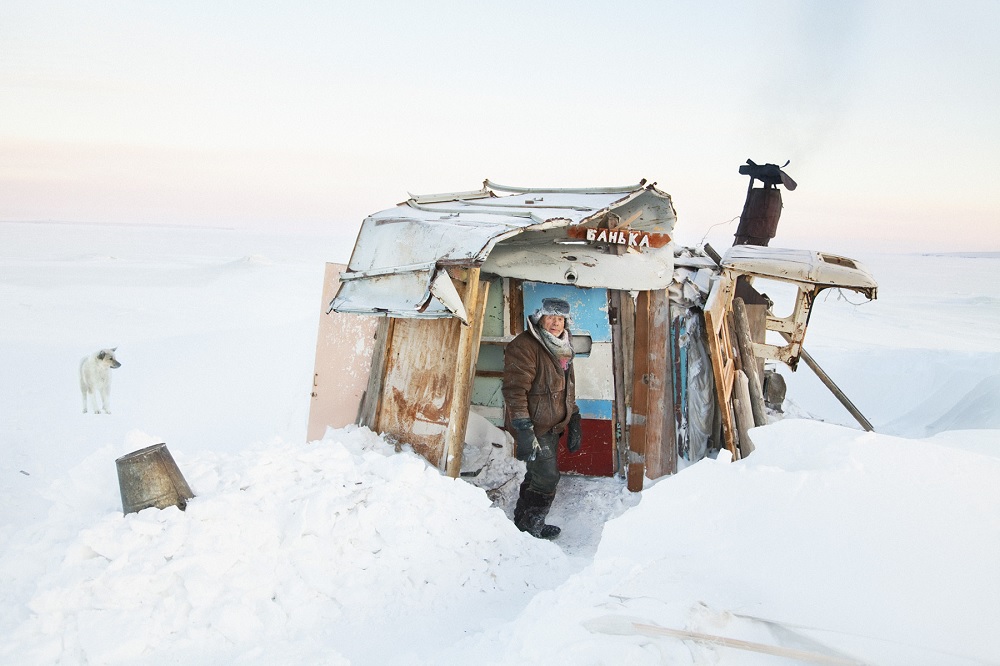 Q: When you returned to your hometown of Tiksi, you developed a relationship with a girl, Tanya, who became your guide. Tanya must have brought up emotions ranging from sorrow at confronting a vanished world to exultation at finding a subject and friend who was on the same wavelength that you had been as a child. How do you think these feelings shaped your coverage of this place and what do you think these images capture and say to the viewer?
A: I’ve heard different impressions about this project – some people feel sad because they see this almost abandoned village on the edge of the world, some feel the whimsical playful mood and it makes them smile.
For me this project was a chance to see Tiksi with the awe of a child, through Tanya’s eyes in the present and my memories of the past. I felt a strong urgency to be there. I wanted to be naive and playful – let myself be free and just wander around the tundra, make wishes under the Aurora Borealis, hoping that they will come true, to have long conversations with Uncle Vanya in his little hut on the shore of the ocean.
I think that every story I work on is there because it is needed at that particular phase of my life. My connection with Tanya is not a coincidence. I believe that thoughts and wishes can materialize, perhaps it’s a little too much of a metaphysical approach. However, I knew that when I went to Tiksi something very special would happen there. I was awaiting some kind of miracle. When I met Tanya, I was sure that she would become the key to understanding what I was there for. 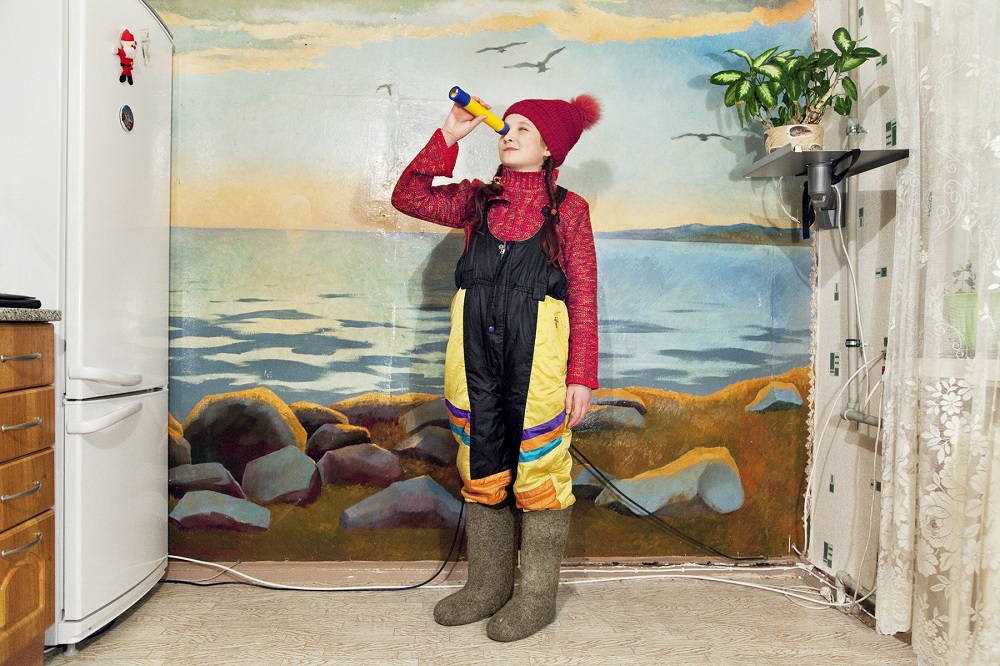 Q: There is something surreal and almost comical about this portrait of Tanya in a kitchen setting peering upward through a toy telescope. It seems to say something about the innocence of childhood, but also about her adventurous and inquisitive spirit. Do you agree, and what were you thinking when you composed this amusing shot?
A: As I said before, Tanya and I have many things in common, like longing for explorations.
She loves reading books about different places in the world and dreams of how she will go and make a trip around the whole world. She has a very curious mind. Childhood is a time when you dream big. Even if you are a little girl and live in a small town you can dream of being a world traveler – that’s what this photograph means to me. 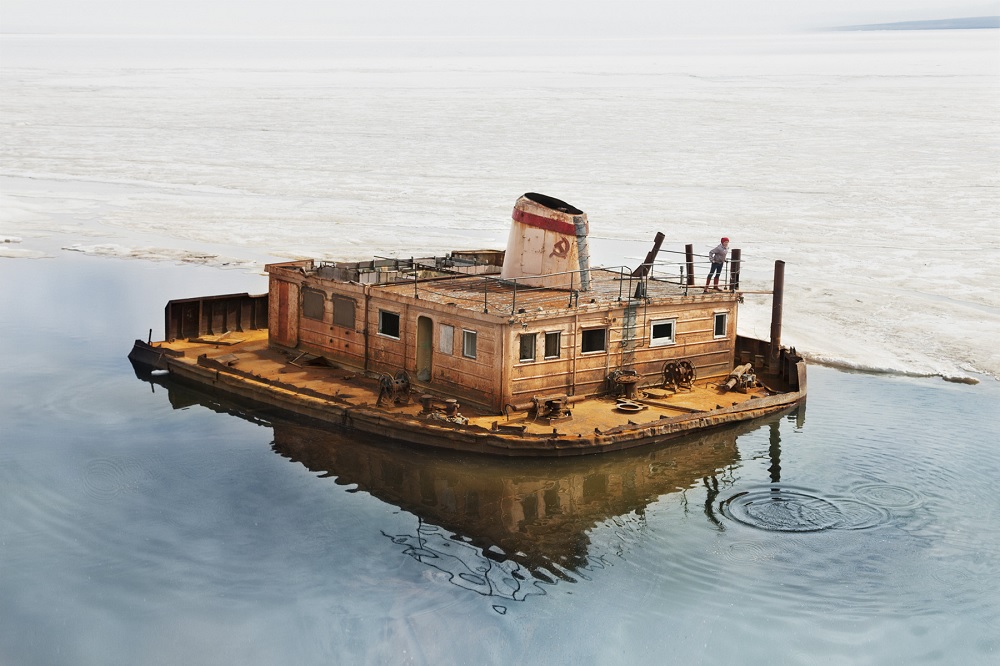 Q: This is a captivating and enigmatic image of Tanya in her red hat standing on a barge. Can you tell us what’s going on here, and is there any implicit political statement here?
A: Under the USSR, Tiksi was to be an important seaport on the Northern Sea Route. In those times the government put a lot of energy into development of the Arctic regions building military bases, meteorological stations, towns, etc. After the fall of the USSR all these projects went into decline, people left and ships stayed, rusting in seawater. It’s scary to see those monuments to what was once a big dream of the great North.  When I was a child, Tiksi was at its best and now Tanya plays stone skipping from a rusty barge and we are only 13 years apart. For me this is what this photograph is about.
Now there is much talk about giving new life to the Arctic and opening the Northern Sea Route again. I really hope that it will happen. 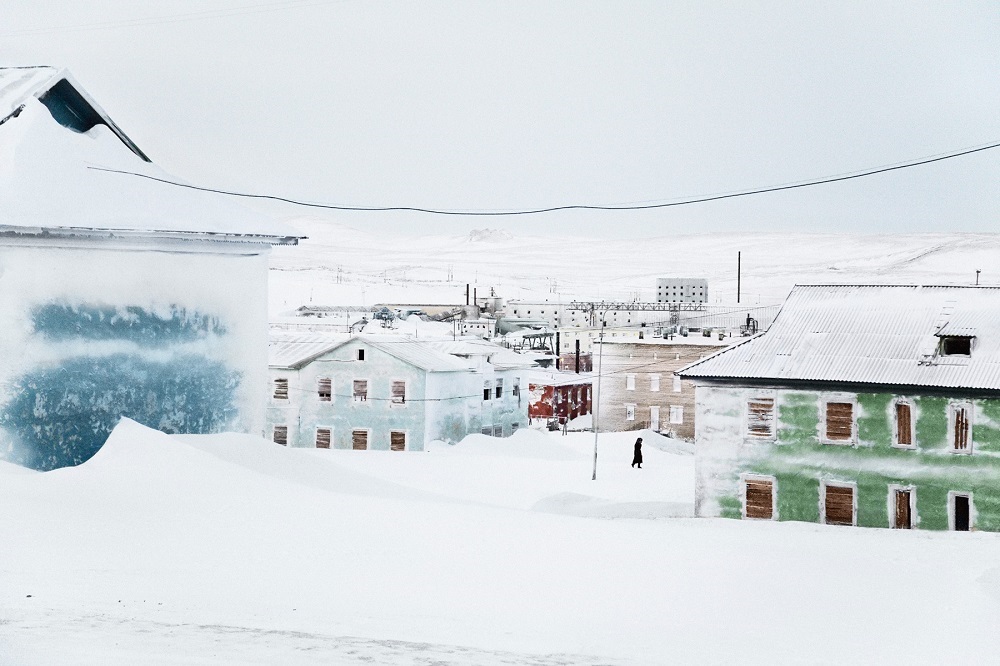 Q: What is it about photographing places like Tiksi and nomadic reindeer herders that strike an emotional cord and motivate you to travel great distances to record them?
A: I am a northern person and cannot live without the quiet and honesty of the Arctic. I feel at home in the tundra. My life is pretty hectic while traveling constantly, but I always know when it’s time to go back to the tundra. It fills me up with new energy and cleanses the vision. It’s a flat land of pure, vast space. You know, in winter during overcast days, the sky is as white as the ground. You can’t see the horizon. It’s a very strange feeling as if you are floating in zero gravity. You can walk for miles but will never notice your progress because the landscape never changes. No visual clutter and noise. Sometimes when I’m in big cities I dream about a walk like that.
The North keeps inspiring me with its stories; I want to process them. I also just love adventures and going to strange, faraway places.
Q: Do you plan to document any other cultures in the near future or explore any other photographic genres? For that matter, do you plan to return to Tiksi, the project you say you don’t ever want to finish?
A: I have ideas that are now in the process of crystallization. They also involve life in the Arctic. I have a feeling that I will be visiting Tiksi again, but perhaps this project is finished as my mind is already wandering elsewhere.
Thank you for your time, Evgenia!
– Leica Internet Team
To see more of Evgenia’s work, visit her website. For more information about the Leica Oskar Barnack Award, visit: www.leica-oskar-barnack-award.com. To order your copy of LFI special edition 2013 Oskar Barnack Award, click here.