As a photographer and artist Marcel Pedragosa presents reality from a distinctly personal point of view, exploring the relationship between people and their direct environments. He has captured images in varied settings around the world, though he is most drawn to urban environments.
Pedragosa was born in Barcelona in 1978. In 2011 he moved to Paris where he has obtained several artist residencies allowing him to execute his first major photographic project, “Parisii”. The Bibliothèque nationale de France purchased part of this portfolio for its permanent collection in 2012. This same year he was invited to the International Festival of City Photography, Photograffiti, and created the “Western Eyes” series in the Russian city of Perm, which we will discuss further in part two of our interview. Here we delve into his unique approach and discuss his Parisii project.
Q: Can you tell us a bit about your career as a photographer?
A: I am a full-time photographer and I develop multidisciplinary tasks in relation to photography and visual communication. After my arrival in Paris two years ago, I worked at the Magnum Gallery, Paris Photo and Art Paris Art Fair. I have been commissioned by publications including La Vanguardia and El Periódico and institutions such as Cite Internationale Universitaire de Paris, The Spanish College in Paris, and Institut Ramon Llull based in Paris.
Q: In what particular genres, if any, would you place your photos?
A: Although most of my photographs are taken in the street or in public places, I am not so convinced that they should be considered street photography. If I had to choose one genre, I’d place my photography in the fine art field.
Q: Your photographs could almost be characterized as the abstract expressionism of everyday life, and they certainly have an authenticity and openness that allow for a variety of interpretations and emotional reactions. How do you select subjects that you believe will engage viewers in this way, and what motivates you to point your camera at a particular subject or to try to capture a particular moment?
A: “Abstract expressionism of everyday life”, is certainly an accurate description of my photography. There is something conscious and unconscious in the way I choose to photograph my subjects. Generally I feel most comfortable taking photos in large cities, from there I concentrate on people. Shooting people without asking and following my intuition is my starting point, but I’m never sure about the final result until the film is processed. Then I can analyze the results on the contact sheets. Nothing is guaranteed and that creates an element of surprise. Post-production therefore consists of choosing images that balance aesthetics, fascination, harmonic composition and coherence within the series. 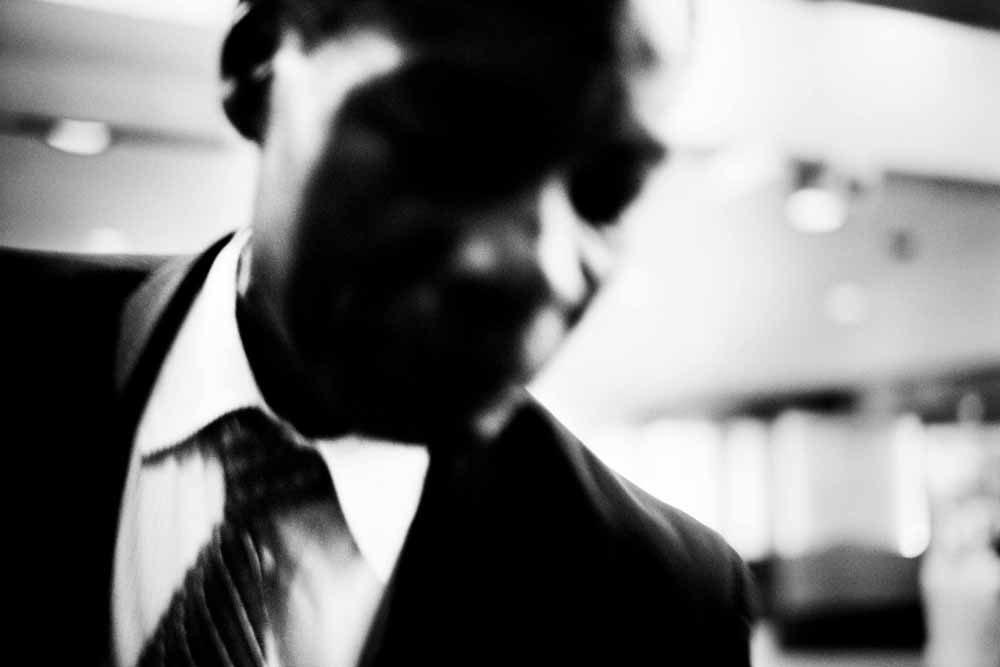 Q: Did you have any formal education in photography or were you self-taught?
A: I bought my first camera in 2002, an analog SLR, and at the beginning I was self-taught. In 2004 I took my first serious course in photography and black-and-white processing in Barcelona. In 2009-2010 I achieved a Master of Art degree in Photography at the Edinburgh College of Art.
Q: How did you first become interested in Leica?
A: I became aware of how significant Leica was for photography when I visited the Henri Cartier-Bresson Retrospective in Barcelona. That’s where I discovered the magic of this master photographer and started to understand the importance of the M-System for the development of modern photography. I could not even imagine I would present my photographs in two Leica stores in different capitals 10 years later.
Q: What camera and equipment do you use?
A: I primarily use a Leica M7 with a 35 mm Summilux lens f/1.4.
Q: Which lenses did you favor for the images in your Parisii and Western Eyes portfolios, and what film do you use. Do you do your own processing and printing or do you have it done?
A: Both projects were shot with 35 mm lenses. I used a Leica M7 with B&W Ilford Delta 400 or 100 for Parisii and a Leica M9 for Western Eyes. I do not do my own processing. I work with a laboratory called Picto in Paris, producing limited editions of 10 gelatin silver prints.
Q: What does photography mean to you?
A: I think photography has the ability to define who you are. I see a direct connection between your soul and what you choose to represent in the form of a photograph. Even though I put distance between myself and the subject I am photographing, it is still a very intimate mode of expression. Right now I could not understand life without photography.
Q: When you state that you “see a direct connection between your soul and what you represent in the form of a photograph” and, to paraphrase, despite the distance you place between yourself and your subject, it is still an intimate moment; it says a lot about your work in a very precise and concise way. Can you tell us more of what you mean by these comments?
A: Well, I think your mood and who you are characterizes everything you do. Photography is not an exception. Every photograph represents different points of view and, depending on the moment, also a mood. When looking at a photograph there are implicit sensations that may suggest who you are behind the photo; it is a signature. Indeed, even if there is no interaction between the subject I photograph and me, there is always a subjective connection in the way the image is presented.
Q: You recently exhibited your Parisii images at one of the Leica stores, is that correct? How did that come about?
A: During last year’s Paris Photo, I contacted Leica France to show them my portfolio of work created in Paris. Sometime later we agreed to meet and put together an exhibition for the Leica Store in Paris. To this end, 16 photographs from my work Parisii were printed, framed, and hung. They were on display at the Leica Store Paris until the 31st of May. 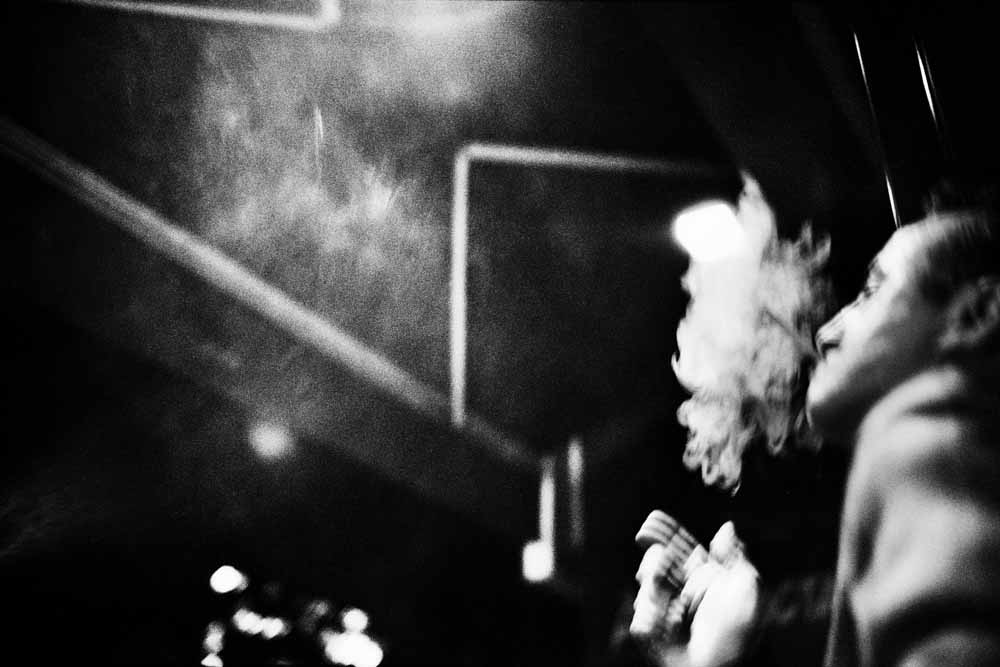 Q: This intriguing image seems to be a “fire eater” blowing flames out of his mouth or maybe it’s just someone blowing smoke, but the environment suggests a stage and that he is a performer. What exactly is going on here? And what were you thinking when you pressed the shutter release?
A: This photo embodies some of the elements we’ve been discussing. It is not clear what the performance is or whether it is taking place indoors or outside. However, it is simpler than it looks. This man emerged from a café to smoke a cigarette on the terrace. It was very late at night and I was there long enough to blend into the scenery, enabling me to take some discreet photographs. I wanted a photograph with someone smoking and, although there was practically no light on the terrace, I captured what I saw. All I was thinking was that I wanted the photo I imagined in my mind and I could not wait to check the negatives! 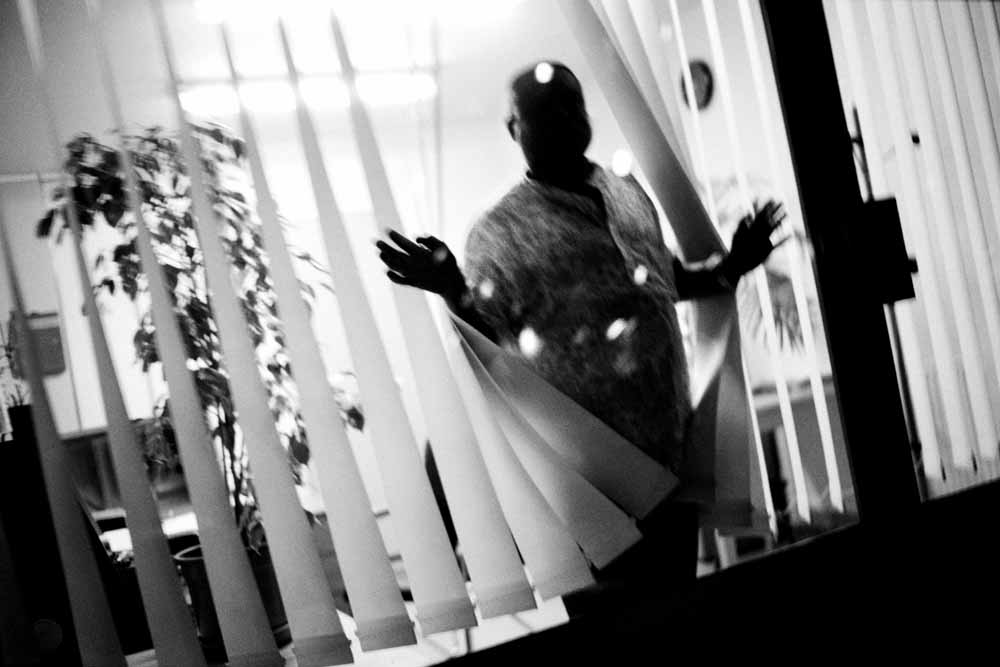 Q: This photo of a man parting Venetian blinds with his hands, an elegant gesture, is precisely composed, although the image has a random quality. You don’t really know whether the guy is saying, in effect, “Here I am?” or simply trying to find out what’s going on beyond the blinds, but the picture has a universal and somewhat humorous quality. Do you agree, and what prompted you to take this shot?
A: I am actually very happy about this photo. I was late and I was walking fast toward Canal Saint-Martin for a birthday celebration. I crossed the street and as I was passing by the window I pointed my camera to my left when I saw this person looking through the window. I thought it was an interesting composition and I did not hesitate to shoot. Honestly, I have no idea what this man was doing. He was looking out onto the street through the window, but I still do not understand why he separated the blinds to do so. Actually, there was not much to see. I don’t know whether he noticed my camera or that seeing me approaching fast made him freeze. The light behind him enabled me to shoot at a faster than usual shutter speed. 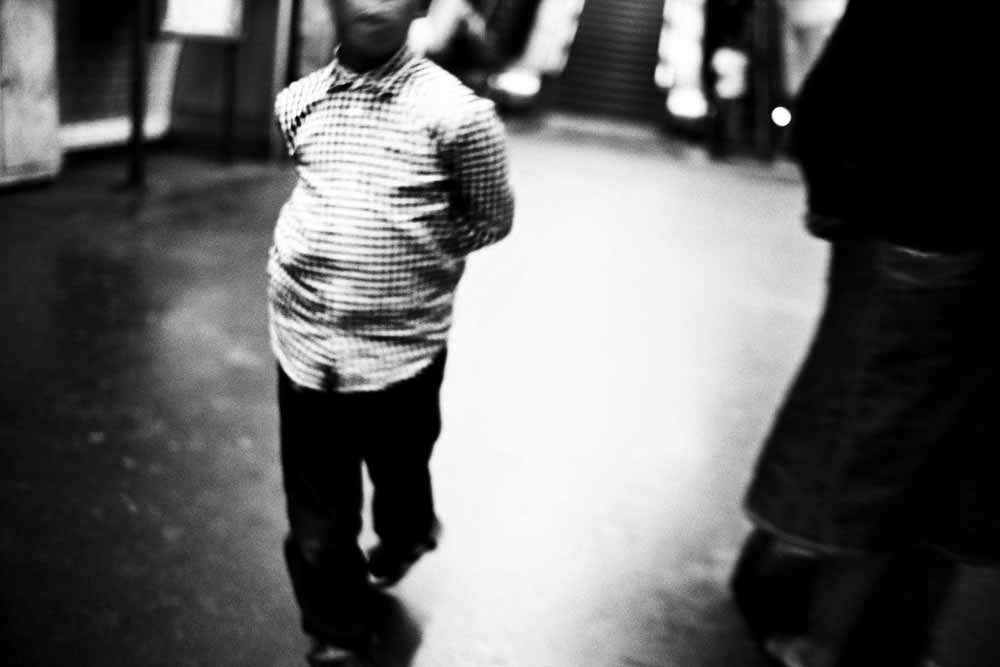 Q: This image captures the subject’s physical gesture as they walk, or maybe dance, on an open floor space. I know this image has many different interpretations, but what does it say to you?
A: This is a kid hanging around the metro. I was waiting for the next train service and he was just going back and forth, the way the kids do when they can’t stop moving around. I thought it was funny and I wanted to take a photo of him. He looked like he was doing something wrong and that he needed to hide, so that maybe the reason he held his arms behind him as an impulsive representation of his feeling. Somehow that was what attracted me.
Thank you for your time, Marcel!
– Leica Internet Team
You can see more of Marcel’s work on his website, www.marcelpedragosa.com.