Cyril Jayant is a self-taught street photographer who was born in Sri Lanka but grew up in Paris and later became a naturalized citizen of France. He is now based in London and is a member of the London Independent Photographers Group. By profession, he is a trained pastry chef and as he puts it, “clicking has been my second main activity next to cooking.” Cyril explains, in his own words, his passion for creating and his goals to expand his photography.
Q: You are a pastry chef by profession and a passionate street photographer as an avocation. Do you see any underlying similarities between these two disparate aspects of your life, and is there anything you have learned in the culinary realm that you have found useful in your photography, or vice versa?
A: I am always trying to find the answer to why I did not settle down on one and have always moved between both photography and pastry/culinary. I think it is due to the fact that in the culinary realm you are not visible and exposed in your creativity and skills. Most of the time you are there to follow someone else’s standards. It is a very stressful career too, involving a lot of creativity and deadlines and lots of challenges of course.
But I found the culinary world disciplined me to be well-organized and well-planned. It has been helpful for me to focus more in photography. It was the reason I never wanted to be a photo assistant, but to continue my own visual development and my own photography. I have chosen pastry to earn my living and I take pictures to keep on living. I feel pictures are my life, something as necessary as breathing.
Q: Can you describe your photographic approach?
A: I always attempt to be discreet and not to show my presence by doing candid shooting. This gives a sense of respect, to keep certain distance and not to interact with the subject. I mostly focus on the creative process rather than just random shooting.
I believe when I photograph it represents my existence, my vision and my expression to be who I am. That is the connection between my photography and me. My path winds through photography, visual art, culture, everything and anything where creativity shows up. I believe in living in the moment and creating possibilities.
So street photography is the medium and therapy for healing my soul. It helped me to rediscover the world, history, humanity, sociology, science, you name it. It is the medium based mostly for the cultural evolution.
So it was my main therapy or the excuse to leave behind what I have to overcome. Going out with the camera was the excuse. It was the way for me to fill the gap of spaces of fulfillment of a stressful daily routine to be precise. So photography soothed me and kept me away from the city stress. The best therapy to see the stressful city life was to neutralize your own stress. I think there is a sense in saying so.
Q: What equipment do you use? Also, all the images in this portfolio are presented in black-and-white (B&W). What is it that draws you to the black-and-white medium? Do you ever shoot in color?
A: My primary cameras are a Leica M6 and Leica M8.2.
My favorite medium is B&W and I hardly did color photography until I started using digital, my Leica M8.2. Working in B&W is the best medium for me to create images with shapes and lines. It gives me many possibilities to have wonderful creative control over tone and contrasts to emphasize my photos with moods and atmosphere.
I need to get viewers’ focus, attention and emotion. Photos sometimes don’t make sense to me in color because my eyes aren’t used to seeing in color. However, the M8.2 taught me there are endless possibilities in digital and it is good to change into color so that it helps to exercise your eyes. That is what I do sometimes and I have started a color series called “Colors of M8”, giving this camera some credit. 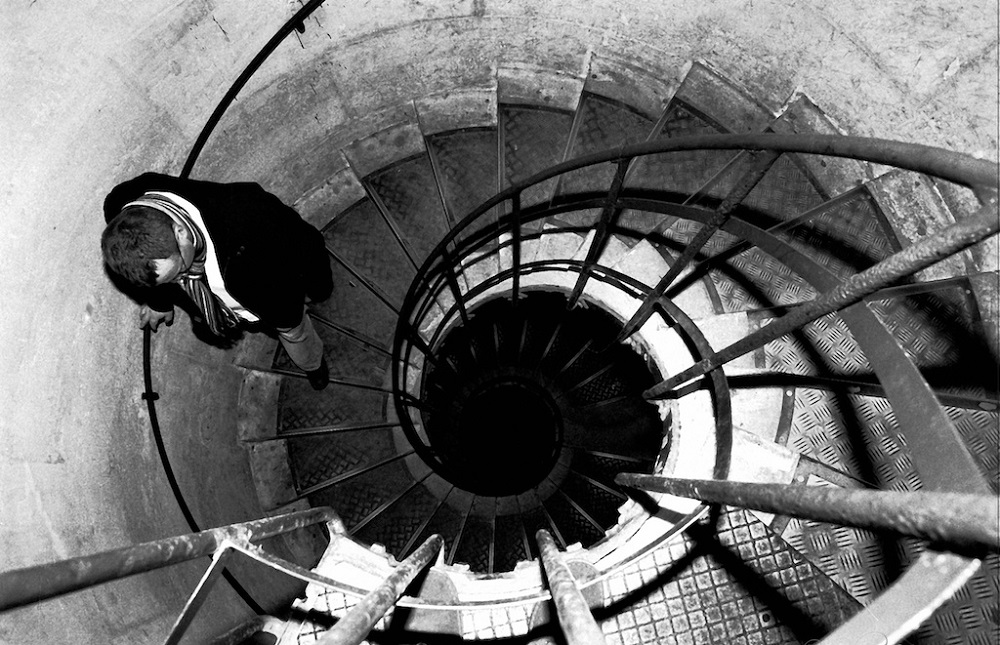 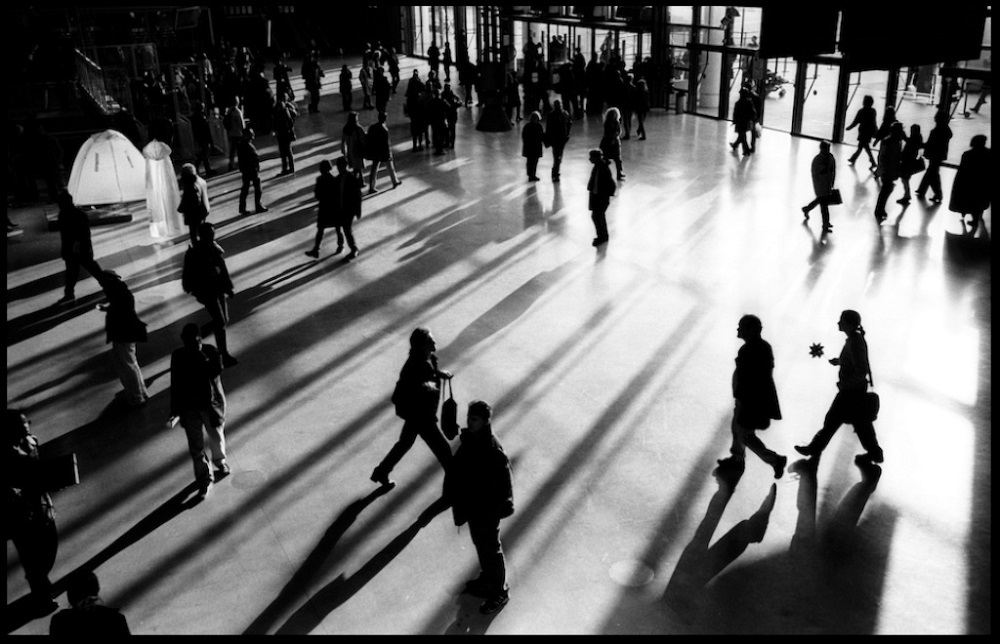 Q: These two images in your portfolio appear to offer homage to classic photojournalistic images of the past. Was this conscious on your part, and how do you think you were influenced by the great photojournalists whose work you have studied?
A: My first photographic journey was to learn about photojournalistic, reportage and documentary photography. I believe I had lot of influences from the works of many photographers like Brassaï, Edouard Boubat, Willy Ronis, Rene-Jacques, Robert Doisneau, Martine Franck, Henri Cartier-Bresson, Elliott Erwitt, Peter Turnley, Jeanloup Sieff and many more. In Paris I was living with images all around and I have seen through other photographers’ eyes. So naturally it was easy to reimagine the old photography I had seen. 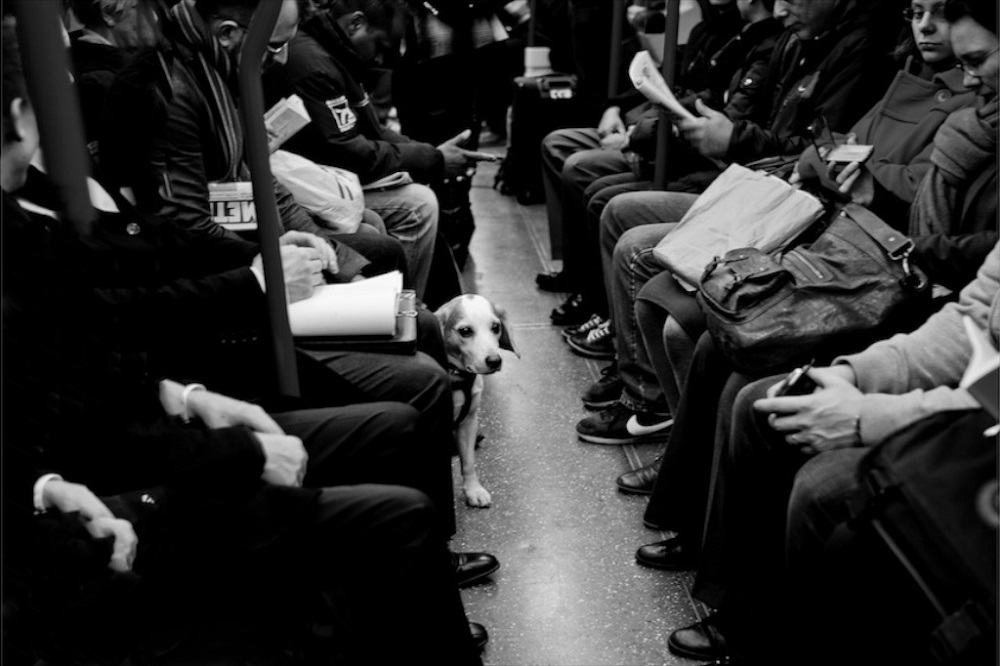 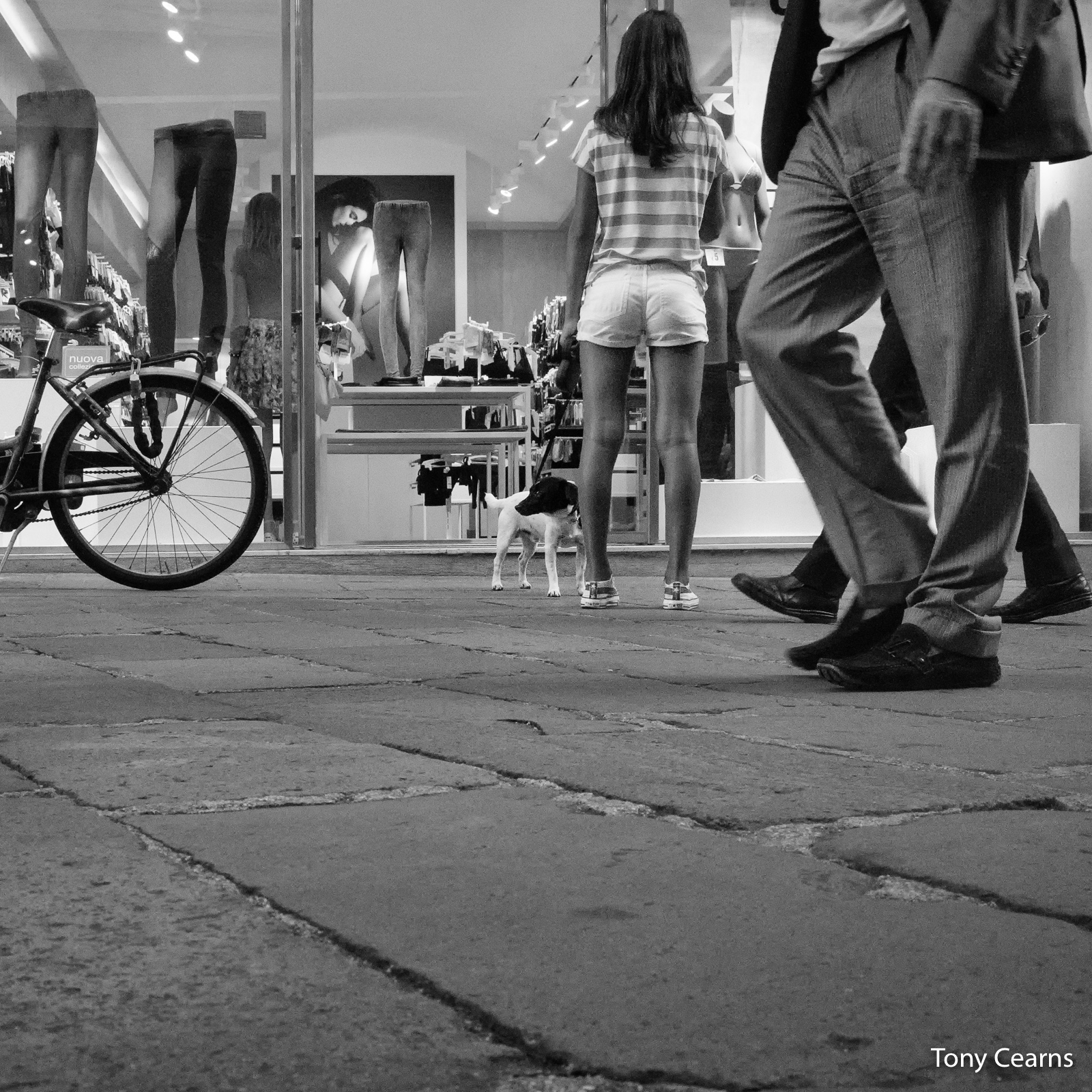 Q: Humor and whimsy are strong elements in the work you have presented. They remind me of some of the images of Elliott Erwitt, a great street photographer noted for his visual humor. Do you agree, and do you consciously seek odd juxtapositions and ironic elements in your work?
A: I am getting very emotional and I don’t think my photography can be compared to the level of Elliott Erwitt’s photography for comparison. He is one of my favorite photographers and I think my mind is obsessed with his humorous photography. He is a gifted photographer with that ability and if someone can imitate that, it is a hard practice. I guess I have learned some thing from him. But I am not sure I have added and shown that influence through my photos. 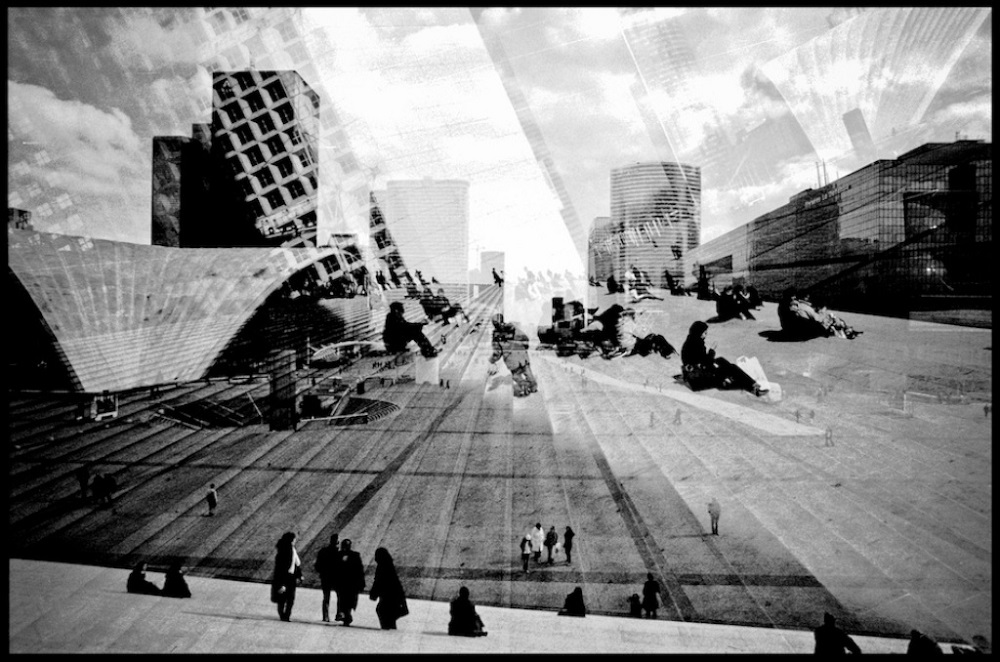 Q: This image, La Defence, is reminiscent of Secessionist Movement works and also Russian poster art of the pre-World War II period. Is this image a reflection or a multiple exposure in camera? In any case, what is the actual subject, where was it taken, and what does it mean to you?
A: Actually this photo is an attempt to do a multiple exposure with an M6. It’s the only one that survived and was selected and edited from the film used. The film was exposed once and reloaded for the second exposure. This is the famous landmark architectural building Grande Arche de la Défense in Paris. I have seen lot of creative visions of this architectural structure by many photographers. I had shot many photos here before too and they turned out to be just “I was there” type photos. I was determined to do some more with greater effort.
I was trying to explore the possibilities of using my M6 camera for double exposure. This is the result I got and this photo was featured in many publications including my Photo Vogue profile. I did not know there were other similar well-known works to compare with my photo and I am happy to know about it. 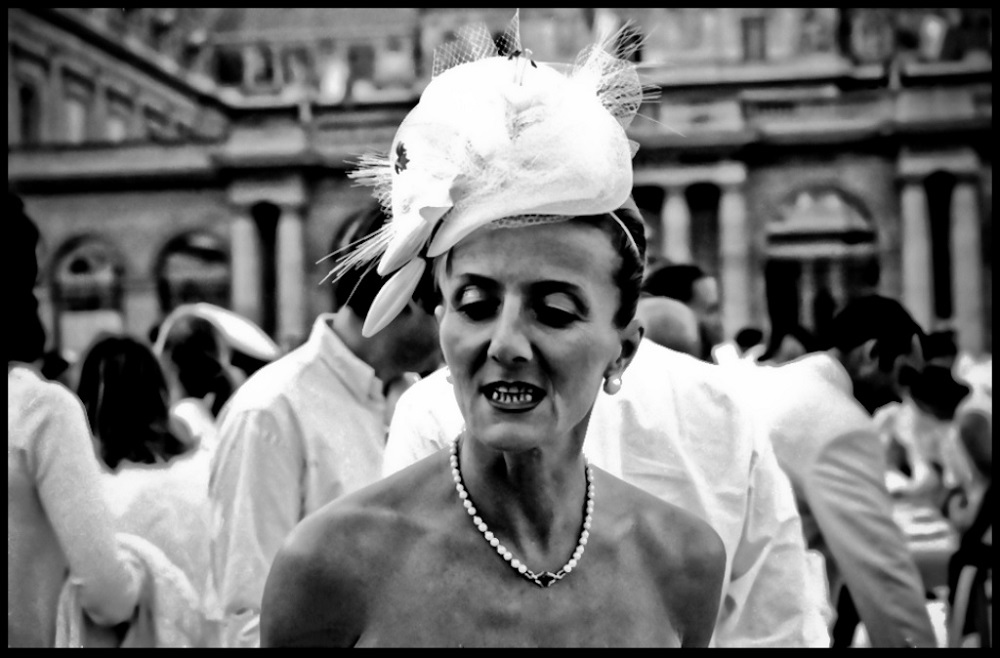 Q: “Dinner in White” is an image that conveys much more with the subject’s eyes closed than it would have if she had been looking directly at the camera. It embodies a kind of artifice and self-consciousness of class, and it makes very effective use of limited depth of field. Can you tell us something about how you took this picture, which lens and aperture you used, and what you were thinking when you pressed the shutter release?
A: This is a picture of a famous Parisian dinner picnic gathering done at the Palais Royal Square. During this event I had a chance to get closer and started documenting the entire gathering.
My camera for this shot was my M6 with a 50 mm Summicron, and it is very handy lens for this type of shot. When I saw her, I started to move closer. I greeted and photographed her then left her with some complimentary word about how she was dressed. When I saw her, I recognized this could be my compelling, winning image from the event. She had everything to show, the elegance of class, which was artificial. So I framed, planned within a second to get the head shot and thought to minimize her top and clicked the camera. As you have noticed, it was the right moment too as she turned her eyes down. 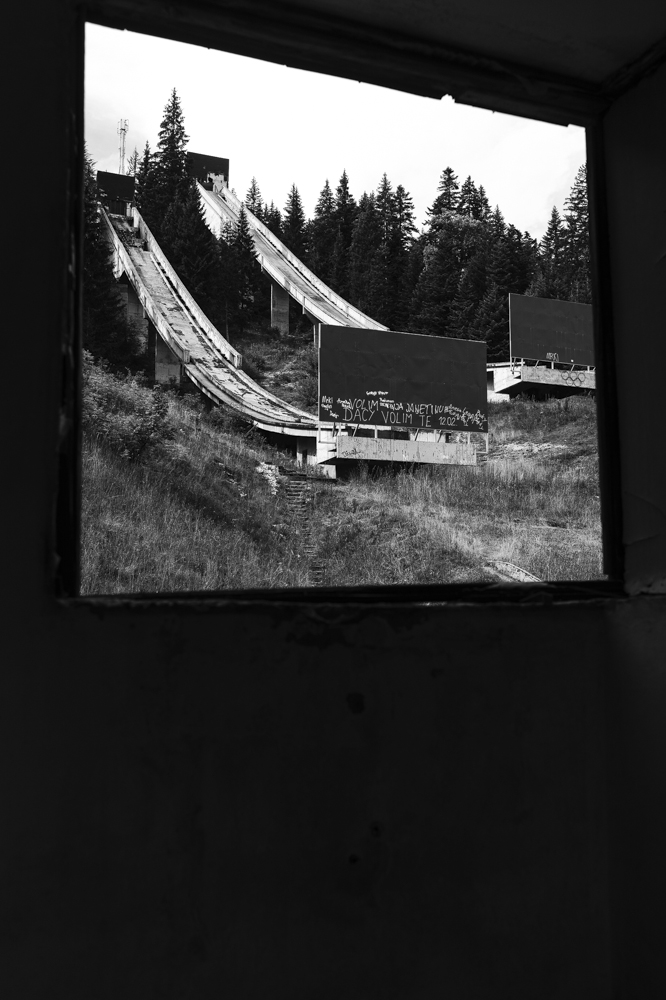 Q: The image “Window” is reminiscent of the famous series of images of prostitutes by Bellocq made at the turn of the last century, yet it has an even more enigmatic and mysterious quality. It is certainly engaging, but what’s going on here and what motivated you to create this image?
A: I agree, and I have seen Dana Poppa’s work “Not Natasha,” which is a great documentary about sex trafficking in Moldova and throughout the whole continent. Fortunately, this image has nothing to do with that sort of story. This was taken during an exhibition at a London museum. There was this architectural structure on display. Many people visited it and I was curious to see someone peeping through the window. This girl made my photo and my observing was paid off.
Q: How do you see your photography evolving over, say, the next three years, and do you plan to explore any other genres? Do you have any other cities or urban areas you intend to document in the near future, or any other countries or cities you would like to visit with your camera?
A: I have already started on a project called “Panoramic City Escapes.” It is an ongoing project between London and Paris.
My next aim and goal is to edit my photography to a strong and consistent body of work and publish a book along with the possibility to exhibit publicly. I am focusing on traveling to neighboring countries to document them. I want to keep my relationship with the Leica M-System and I am confident all my goals will be accomplished as long as I am attached to this system.
Thank you for your time, Cyril!
– Leica Internet Team
See more of Cyril’s photography on Flickr and Facebook.