Maro Kouri: The Rise of the Golden Dawn Party

Maro Kouri was born in Sparta, Greece. She grew up in central Athens and is based there living and working as a freelance photojournalist traveling mostly in Africa and Asia. She also teaches photography as a volunteer to the imprisoned women of Greek Prison of Elaiona, in collaboration with the Hellenic Center KETHEA, and its therapeutic program for drug-detoxication through art. Maro has received numerous awards for her work and one of her images from the demonstrations against the austerity measures in Athens, taken on Οctober 10, 2011 was selected by LIFE Magazine (web edition) as one of the “Best Pictures of 2011.” In 2009 she won the first award at the international photojournalism competition scoop with her work “talisman” concerning the albinos in Tanzania. In 2012, her work “Sparagmos – Greek Crisis’ opened the night – projection of the International Festival of Photojournalism Visa pour l’ Image in Perpignan, France. Her exhibition “Women of the World” is currently on display at Espace Andre Malraux in Herblay, outside of Paris, until March 29, 2014.
In the latest issue of LFI, Maro shares her reportage on the Golden Dawn party in her native Greece.
Q: How would you describe your photography?
A: Telling the truth.
Q: Did you have any formal education in photography, with a mentor, or were you self taught. Was there a photographer or type of photography that influenced your work or inspired you?
A: Konstantinos Manos inspired me talking about the “magic moment.” Ed Kashi pushed me to go further. ‘Guernica’ is a work that left an impression on me from an early age. It hung on our living room wall when I was growing up. In my career as a photojournalist, I stand against the degradation of man. When Germans congratulated Picasso, saying “What a great piece of art you made,” he replied: “You made this, not me.” But, the street is my initial and my everlasting teacher.
Q: Can you give us some additional insight into how and what the street teaches you and how it is intimately involved with your evolution as a photographer?
A: I discover in the street the news, information, the life in images — walking and searching. Where else? Simple folk tell us the truth with honesty. 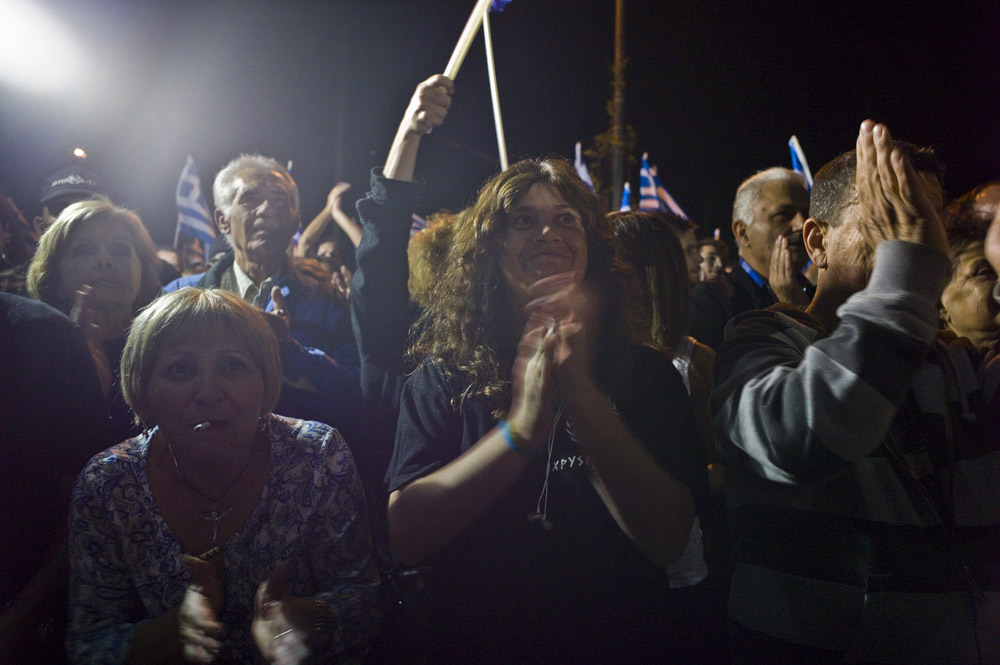 Q: Can you provide some background information on your Golden Dawn reportage? What’s it about? What inspired the idea?
A: I wanted to live the daily life of the Golden Dawn’s voters, and then to try to share it with people, to share what I felt, share what I got through those photographs: emptiness, sadness, violence, criticism, margin, need to belong, need to be acceptable, racism, nationalism, hate.
Q: Your LFI article clearly strives to present an objective picture of Golden Dawn and the disastrous economic and social factors in Greece that motivate its members to embrace an unapologetic fascism. However, there are many indications that you are saddened and disapproving of their hatred and fanaticism even though you understand it has its roots in their personal tragedies and a general societal sense of despair. Do you think you have succeeded in telling the Golden Dawn story in a truthful, compassionate and non-judgmental way even though your personal political and social views are quite different from theirs? Do you believe it’s even possible or even desirable to be objective about such things?
A: Due to the breadth of this particularly difficult subject, I have tried to approach it through art. Why? Because in art one must remain open to observe it. The document is contained in art, and therefore possesses a great range of meanings which a one-dimensional person cannot follow. I want to show with my images that I stand opposed to war and to the destruction of peace. I stand in favor of cultivation and education, for love and prosperity and human existence and civilization, and that I oppose anything that contains violence. I also want to document with my photos that we live in a society where violence is bubbling over. Sometimes it takes a second or third viewing to get that. If it is indeed depicted, then I can say I have succeeded in my purpose.
Q: What camera and equipment did you use to shoot your Golden Dawn reportage for LFI?
A: A Leica M9, 28 mm lens and in very occasional circumstances a 50 mm.
Q: What made this equipment suitable for this project? What characteristics do you enjoy?
A: The totally manual characteristics. I remember a moment in front of the parliament square of Athens, named Syntagma, at Golden Dawn’s protest, I was capturing the moment in such a deep silence, while around me the crowd of the other motor drives was shouting.
The M9 is a discreet camera, so people are not afraid of it, especially compared with the big lenses that people hide from.
To go a little deeper, to capture images with a Leica reminded me of my first steps when I had enthusiasm. It is refreshing because I like to control everything manually. The seconds that I need to focus are magically the proper seconds that I need to find the frame that I like, the composition. The 50 mm helped me — due to its f/1.4 aperture — when the light was nonexistent. 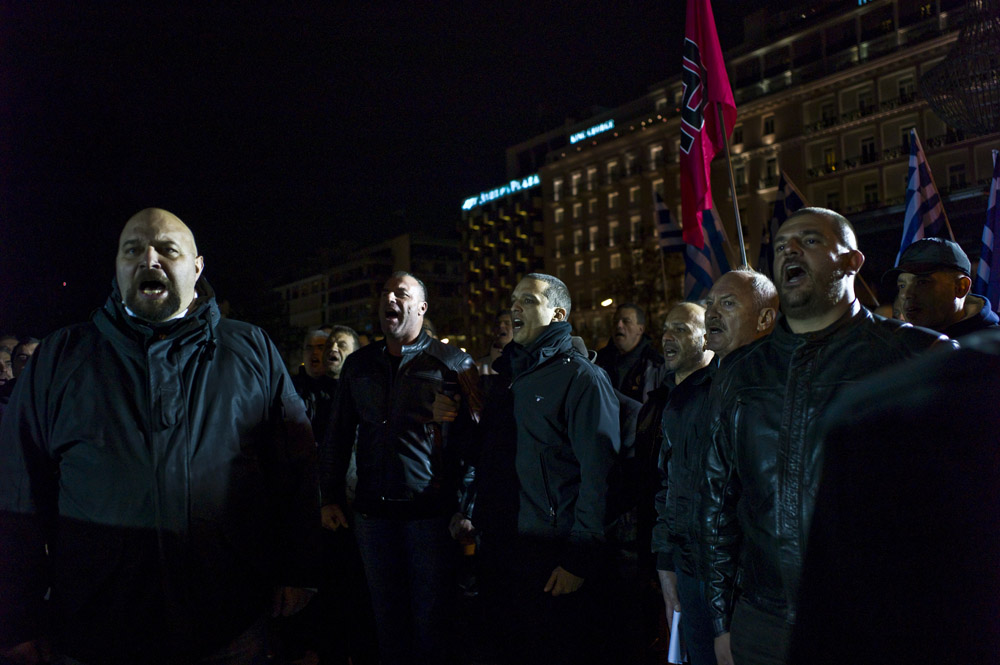 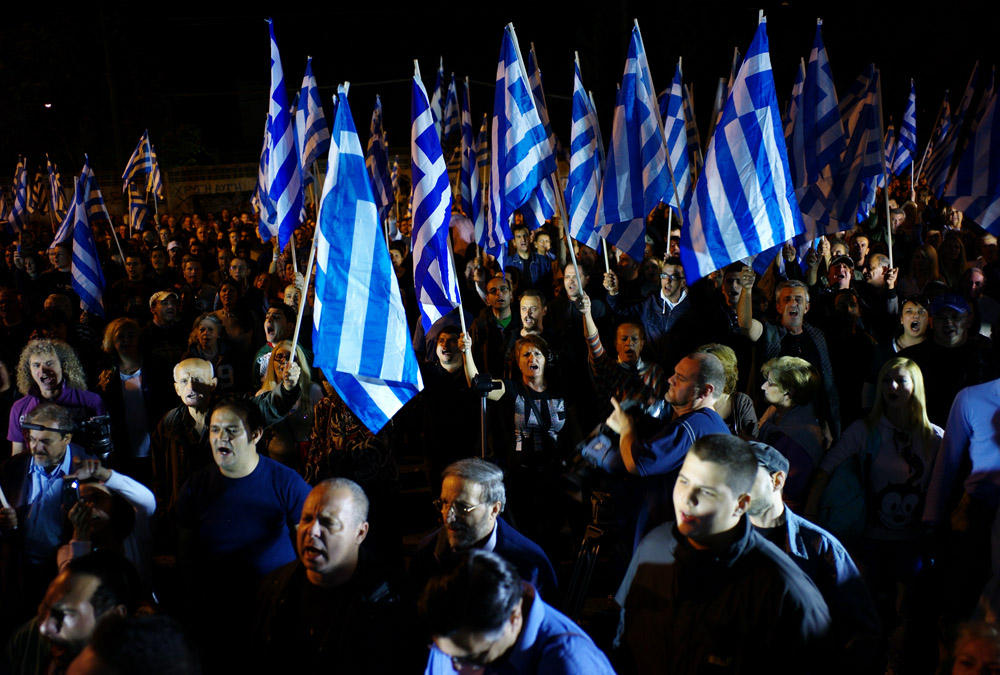 Q: Two of your images in the Golden Dawn portfolio are both powerful images of demonstrations at night that show passion and fervor on the faces of the demonstrators. The lighting, which picks the faces out of the darkness, is fantastic, and really enhances the sense of drama. Can you describe the lighting, tell us something about this event or events, and give us the tech data on these shots including lens, aperture, and ISO?
A: Both are made with the 28 mm f/2.0 and ISO 500. On the left, we see MPs of Golden Dawn, in November 30, 2013 at the Greek parliament square of Athens, and the photo on the right was taken on October 26, 2013 outside the central office of the party, where fanatic supporters held huge flags and march with military steps singing of the national anthem and the Golden Dawn anthem, dressed in black frequently shouting the slogan: “Blood, Honor, Golden Dawn”, supporting the jailed Golden Dawn leader and members. The arrests of the leader and 13 other Golden Dawn MPs and members came a few days after an antifascist rapper, Killah P, was stabbed twice in the heart by a member of Golden Dawn. According to the leaked police report, phone calls were made between the arrested before and after the killing. Fanatism is the last hope of despair; it’s the dark wilderness of soul. 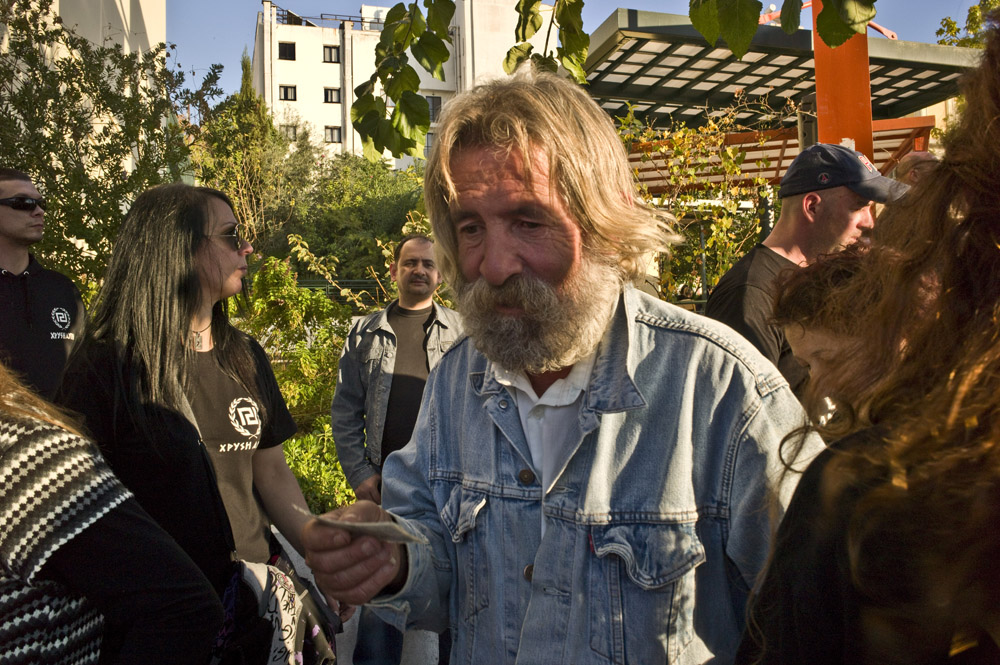 Q: The main subject here is of a guy with long hair and a full beard wearing a denim jacket. He strikes me as an aging hippie, but his downcast, world-weary expression suggests that he has been worn down by circumstances and his once amiable disposition has turned to one of despair and resignation. Am I reading too much into this, and can you tell us something about him?
A: This photo is titled “Rations only for Greeks.” The old, despaired man, must show his Greek ID in order to get a ration from the food distribution that is organized by the extreme far-right party. 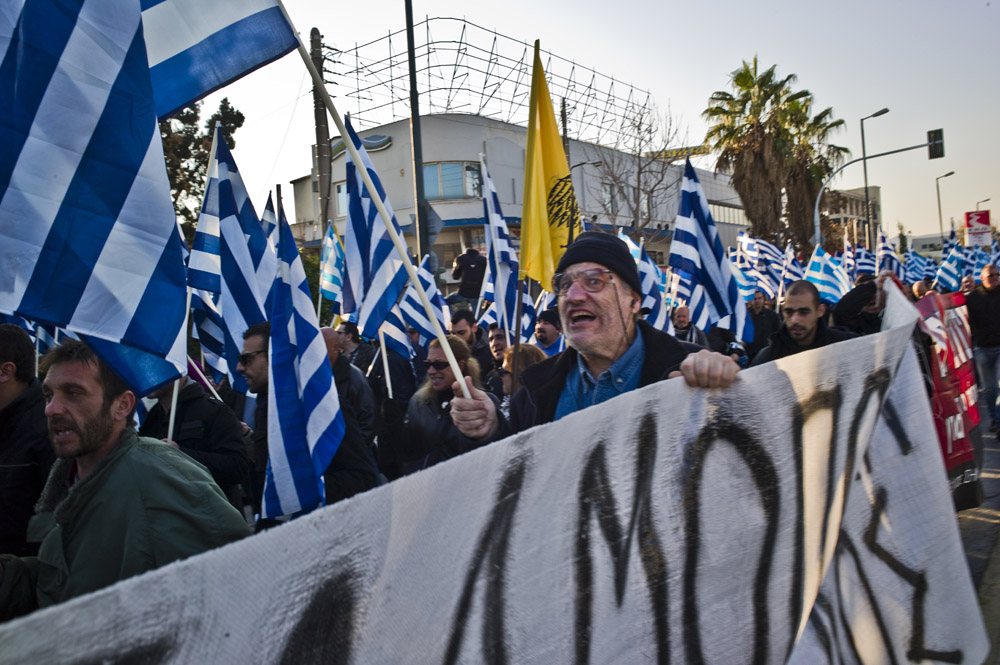 Q: One image shows a long line of demonstrators carrying Greek flags; the central figure is an elderly man with a fierce expression. Along with other flag-bedecked images in the portfolio, this captures the nationalist element in the Golden Dawn movement. How important is this element in the influence and power Golden Dawn is able to project, and why do you think it tends to scapegoat immigrants and foreigners?
A: One day, we were in my car with a Golden Dawn (GD) member, on our way to the unemployment bureau to renew his card. Someone from Bangladesh approached at the stop lights to clean the windshield. The GD member angrily waved him away, saying: “He had food to eat. I don’t.” The GD member has a knife which he knows how to use. The time passes onward and he has nothing to do, other than his participation in GD activities. Meanwhile, foreigners are cleaning Greek homes or taking care of aging parents. Isn’t it an oxymoron? I am not a sociologist, or an economist, or a political analyst, or a psychologist in order to record the reasons for which hatred is cultivated against those who are different. I am a simple photojournalist, a simple artist. I believe the question is answered in the published article.
Q: How do you see your photography evolving over, say, the next three years?
A: Every day I try to approach the reality with the eye of an artist; this is my plan for now and for tomorrow.
Thank you for your time, Maro!
– Leica Internet Team
You can see Maro’s full reportage in LFI. Also available for the iPad. Connect with Maro through her website and YouTube.