Cedric Nunn: Gazing at the South African Landscape to Reconnect the Present with its History

The Leica camera Blog Uncategorized Cedric Nunn: Gazing at the South African Landscape to Reconnect the Present with its History 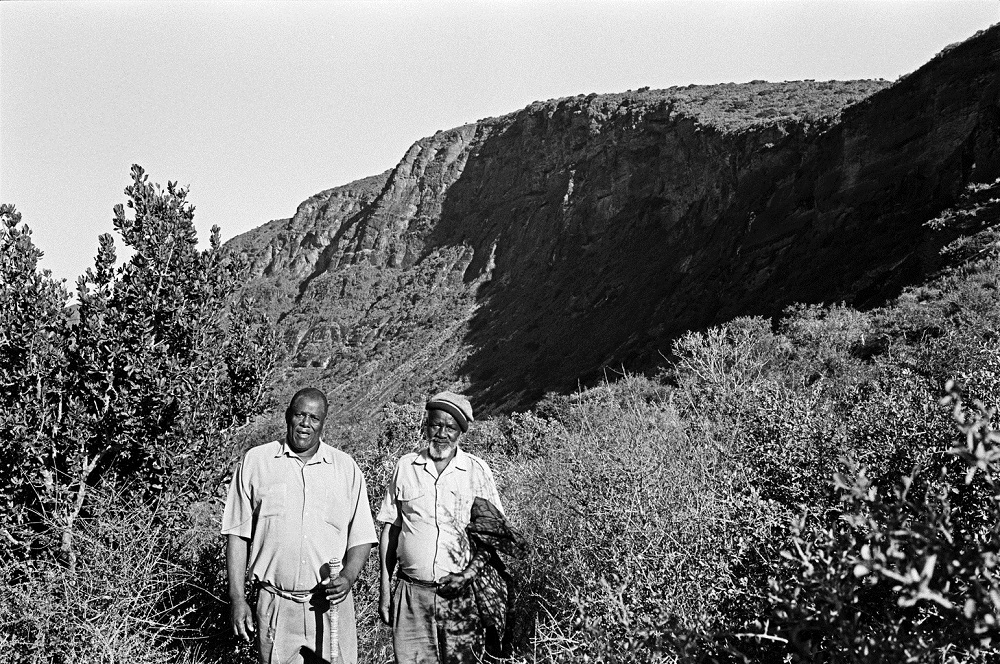 Q: Looking at your photographs, we face often magnificent landscapes but most of them do not seem to bear visible traces of that long resistance (which seems to indicate that, in a way, “there’s nothing to see” regarding that point) and, at the same time, we also see in your images tour guides and descendants of the warrior chiefs: a presence that seems to point to a memory which is still alive, transmitted… I’ve then grasped your work between these two opposite lines: the erasure of this memory (or a dismissed memory, as we also see some memorials) and its upholding. Could this be a possible reading?
A: I am a South African of both Zulu and European settler descent, and in South Africa, when we think of a warrior nation, we think of the mighty Zulu. After the British had ensured the defeat of the Xhosa people in 1879, one hundred years after the project had began, and more than twenty years after the Xhosa had in desperation destroyed their economy, the British set sail for the province of Natal and in less than six months destroyed the independent Zulu nation. It’s interesting to notice that the myth of the Zulu as warrior remains in our popular imagination. Not only is there an erasure of memory, but a reinvention of it to suit colonial and empire ambitions and designs. The South African ruling regime has been and is still largely affected by the success of the re-writing of our histories. After all, most of them were educated in the Western tradition where these myths were propagated. Not really believing in ourselves, we seem not to take seriously who we are or once were. 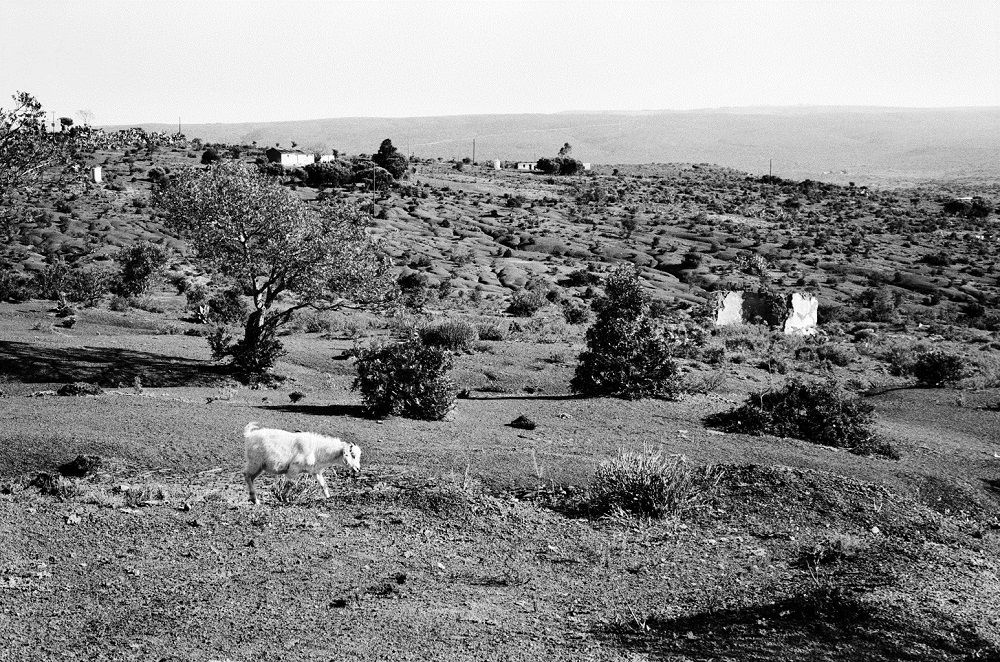 Q: Some of your captions refer to the consequences people face today regarding these lands, as with this one that reads: “The fruits of dispossession. Soil erosion due to over-crowding and over grazing in KwaNdhlambe Village.”
Also, while focusing on precise historical dispossessions and by intersecting past and present, the interpretation of your work may perhaps expand from this particular South African context and point to something else: the land-grabbing which is affecting contemporary Africa and its future. Hence, the importance of the maintenance of memory, even if political and social conditions evolve. Were these ideas some of your views?
A: I am very cognizant of the present “Reconquest of Africa” and the land-grabs that accompany it. South Africa is, perhaps along with other southern African countries like Botswana and Zimbabwe that are both former British colonies, afflicted by private property laws and regulations. These dictums of the West and so-called civilization regularly dispossess indigenous peoples of the only asset important for their survival. They also create mayhem for the diversity of species necessary for good health of the people and the environment, through misapplied agricultural methods such as mono-cropping and an over reliance on chemicals, herbicides and pesticides. Add to that the introduction of genetically modified organism, which account for 90% of maize grown in South Africa for instance, and you see what a disaster this is. The wars of the DRC, Mali, Sudan, to name but a few, are traced back to the controled exploitation of resources mostly on land occupied by indigenous Africans who need to be forcibly relocated and compliant regimes installed.
Q: Did you face particular challenges, while conceptually constructing your subject or while being on the spots gazing at the landscapes?
A: The biggest and ongoing challenge has been to overcome the beauty beguiling nature of the landscape. To see beyond that, to the tragedy it evoked, is difficult and I have my doubts about my success in doing so. Also, I begin to feel that what I have done so far is a mere token gesture that far more needs to be done.
Q: As there are few material tracks in the landscape of what happened one hundred years ago, the very point was how to make visible something which is almost invisible nowadays and to intersect the couple visibility/invisibility with the beauty of the nature and its painful past.
A: In fact, fortifications, military forts are traces of that past and they are still visible in the landscape. Initially, I thought I wouldn’t even photograph one fort, as I decided to position the project from the indigenous people’s perspective. But eventually I realized that the people had to face up to these formidable infrastructures, so I tried to look at them from the perspective of their surveillance. You can imagine that the technology they used was not superior to the European one so, their strength lied in the tactics they used. I’ve ended up observing the forts in the way I imagined the Xhosa people would look at them, from a distance, and in this way they become quite insignificant on the landscape, quite crazy structures on those landscapes, they almost disappear.
The central theme of my project was land: land was desired and land was defended. Both side, people didn’t give up or surrender; they stayed and continued, for one hundred years, to try to be victorious or to defend it as much as they could, because they saw virtues in the land.
So I began to think that the public should find beauty in my images, because that’s why the land was contested for so long.
Q: I have a feeling regarding these images: they seem very silent.
A: Because the image are so quiet, they invite you to interpret them. This can be a certain power that they have: they’re not telling you exactly what to think, allowing you to imagine and to bring your own perspective to the scene that you look at. 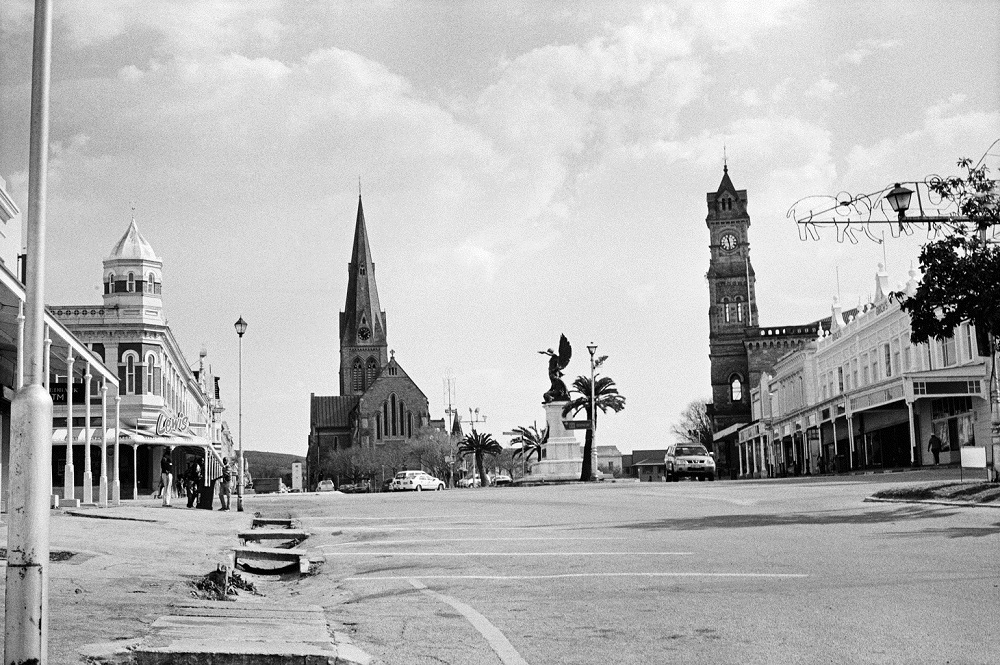 Q: Let’s stop at the image of the cathedral of Grahamstown, here too there is a sense of quietness, but then the caption says,”The site of Ndhlambe’s Great Kraal, according to the current Ndhlambe descendents. Grahamstown Cathedral Square. Eastern Cape. 2012.”
A: I hope this introduces a certain tension because that is how we experience this landscape and the entire geographical region. The constructed landscape, the environment that we see is designed in a way that meets certain criteria of aesthetics and yet, if you’re aware of what occurred there, you will look at it as a mask; you’re looking at a façade that covers a wound, a trauma. Then, that facade allows us to sleep, as we forget what it masks. I’m speaking of a contemporary audience who engages with these infrastructures in the landscape. This sweet aesthetic is part of our somnific state.
With this work, I’m making a statement: this incredibly traumatic past of ours impacts the present day; we cannot understand the current situation if we’re not taking into account the trauma of that past. This way, I’m making a very simple record of that fact. It’s almost a very basic, elementary, but necessary exercise.
Q: Is it the first time that you look back so far with photography?
A: Yes, but with the next project I’d like to go back even further. To 1650 until 1750 where hundreds of thousands, if not millions, of the first nation people were killed. These people resisted, but their resistance has been erased from memory. For over a hundred years, their survivors had no identity and yet, they have managed to survive. So, I’m intending to produce a work that presents the contemporary survivors of that trauma.
I hear too many people saying that we need to look forward to the future, but there are voiceless people without power: they are the people who I feel more inclined to listen to. They are the ones who are saying, “You have forgotten us; we have been insulted and now we are being left without any kind of recognition of the fact that we were injured in that long process.” There are many people who are in that situation. It’s a homage to them basically.
Q: This work has been shot with a Leica, how did it help to achieve the vision you had for your work?
A: The Leica M6 with a Elmar-M 2.8 50 mm lens is the only camera equipment I own, and has had to suffice for the job. I think it has.
Thank you for your time, Cedric!
– Leica Internet Team
Connect with Cedric on his website and blog.