This is the second part of Robin’s journey to Istanbul. Read the first part here.
Sometimes it pays to follow your curiosity.
On stumbling across a derelict building one afternoon in Istanbul, I pushed open the corrugated metal door and stepped inside. I could hear an animated conversation around the corner that sounded like a group of Turkish men. At this point I became very conscious of the equipment I was carrying and the fact that I had just entered an unknown building in an unknown city! Although I couldn’t understand a word of the conversation, I concluded that the tone was non-threatening and I decided to hang back and see what would happen. A few minutes later a young, bearded man dressed in a beige body warmer, walked around the corner and looked surprised to see me. I smiled hesitantly and pointed towards my camera and then the dilapidated building. He seemed to understand and gestured for me to follow him around the corner where the other voices had been heard. 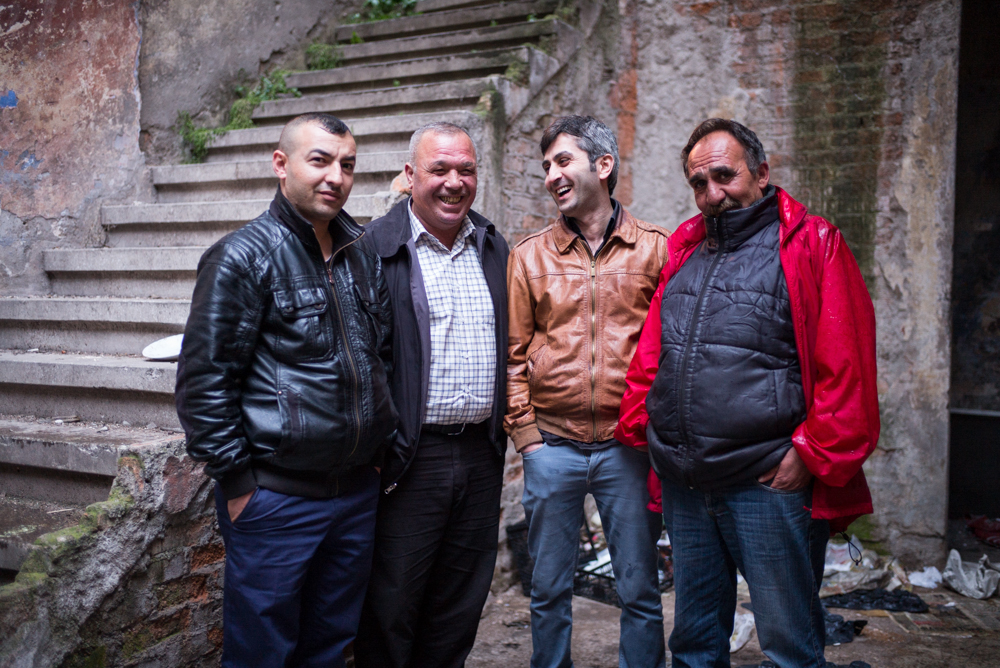 Here stood four men eating, drinking and smoking. The room was filled with the carts used to transport and sell the breads that I had been acquiring a taste for. Several cats stood alert hoping for the leftover chicken and rice that the men were devouring. I was immediately offered a cigarette, which I declined (being a non-smoker), and then a drink which I decided to accept. A few shots of raki (an anise-flavored alcoholic drink) later, everyone seemed relaxed including myself! Conversation-wise we hadn’t moved passed “Me Robin, photographer”, but I felt like I had already been accepted into the circle of friends and felt comfortable to start taking photographs again. As the evening progressed I mostly watched, smiled and observed as more people joined the group while others left. The men were aged roughly between 25-65 and they all seemed to be good friends.

I returned the next afternoon with a gift consisting of a bottle of raki and a selection of nuts. The group seemed thrilled with my efforts! I had started to use nicknames for some of the main characters such as “The Manager”, “The Kurd” and “The Russian”. The Manager, the man who had initially found me in the building, appeared to be the youngest of the group. He was also the most charismatic and definitely the joker. The Kurd, who always dressed in a green Armani jumper, would take me for an early dinner of chicken, rice and chickpeas for the next couple of evenings before drinks would begin in the derelict building. The Russian wore immaculate black patent shoes, and always carried dollars rather than liras. He seemed rather proud of this and would often make a show of counting them out on the table. That evening I found myself heading for Taksim Square. All the main attractions were pointed out en route and I was treated to several snacks from street-side vendors. The Kurd seemed to know them all and everything offered was complimentary.

For the next couple of days, I continued to return to the derelict building with no idea of what would occur. One afternoon I was taken to their local club where card games and Turkish tea were on the agenda. Later on I found myself in a barber’s shop watching The Manager getting spruced up before his evening out. On the last day The Kurd took me on a tour around the city including a boat ride along the Bosphorus.
As no one spoke any English, and I no Turkish, on each of the days I returned to the derelict building, I brought a few written questions I had translated online in my hotel. The idea was that I could have their responses translated and eventually get to know a little about the friends with whom I had spent so much time. Unfortunately, it didn’t amount to a great deal. The Manager sells simits (circular Turkish breads) for a living, and also works as a driver. The Kurd, originally from Mersin, is “trying to get used to all of life’s colours”. Decency forbids the descriptive translation of The Russian. As he couldn’t write, his “friends” obliged. All I can say is it involved chickens and relationships!
– Robin Sinha
Robin’s work has been published in various publications including Black+White Photography, Dazed and Confused and Port Magazine. He is the Leica Akademie Instructor at Leica Akademie Mayfair. Connect with Robin on his website.