The summer months for most photographers are busy and for me this year especially, I had the Monaco Grand Prix Historic to attend and if you know me by now (might have read some of my other blog entries) I do like to travel in gorgeous cars… This year I took the beautifully designed Jaguar F Type V6 Convertible. The car was incredible to drive for both Julian (my racing partner) and myself and along with the Leica kit we had. Julian took the reins of an X Vario and I had my trusty M – our journeys took longer than expected. Below you will find out why from both of us. 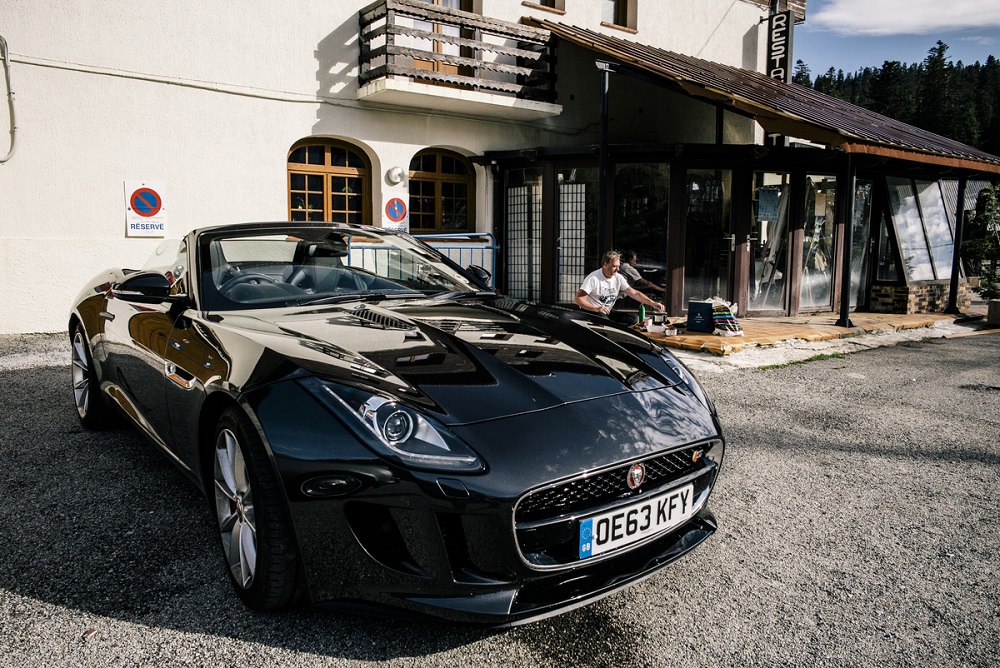 Lara says: The Monaco Grand Prix Historic is one of my favourite weekends of the year yet it is also one of the hardest, the small city circuit is actually really long once you have walked around it five times, with your camera kit, so I insisted that we bombed it down there in the F Type and made a road trip on the way back so that we would be rested and ready. However, Julian decided that as he loved driving the car, we could take some short cuts over the mountains and the shortcut took seven hours longer. Thanks, Julian. 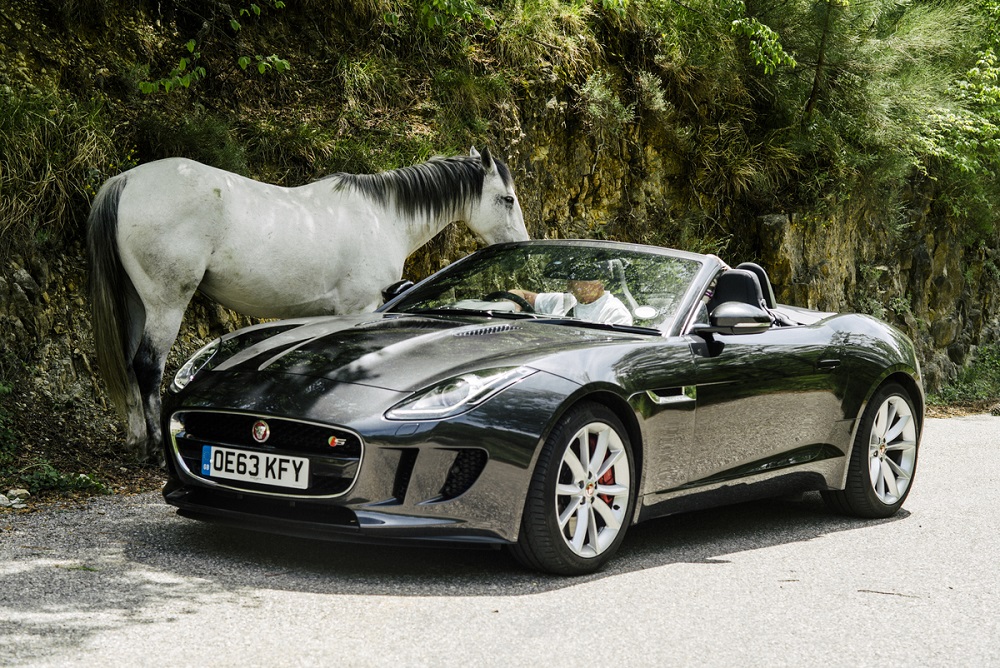 The metallic dark grey V6 sport convertible looked beautiful and with the roof down most of the way I couldn’t resist starting to take photos of it in the scenic settings with some snow still on the mountains in the background. Being prepared for the road, I had my camera stowed in its bag exposure ready, so I could jump out and shoot, but of course (I am not sure how), I forgot that Julian likes to make coffee with his camping stove at any given moment, so we stopped to shoot and make coffee quite a lot of times. Thank heavens I only handed him the X Vario when we got to Monte or we would never have got there (seeing his passion for shooting once he held the camera). I had commissions to shoot for magazines and for some of the drivers, so my weekend was fully booked. I set up the X Vario and handed it to Julian. I shared with Julian the cars I needed to photograph so he too could look out for them and actually I think he was happy to have a sort of brief to work with. The weekend passed but it seemed a year. I remember in the press room as we were packing up the kit, I felt that I hadn’t taken enough photographs and this chap next to me said, “You still haven’t realised the game?” What did he mean? The game? “Yes” he said, “the game of the photographer, always needing to take one more”. Absolutely, I know this game, I know it all so very well, I am deep inside this game every time I work on a commission. 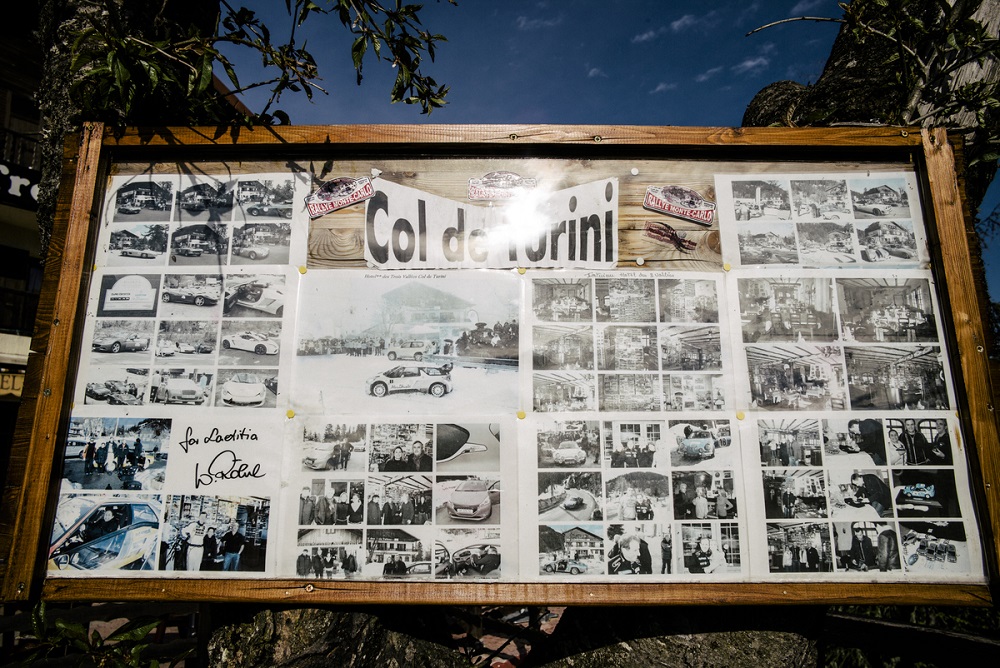 But this diary is about the road trip, taking in some of the famous Monte Carlo Rally routes particularly the Col Turini: a road that Julian asked “Is this the road where someone comes and scribbles on the SatNav?” Armed with the X Vario camera Julian was now entitled to shout “STOP THE CAR” as this is what I do when we are on any journey… I realised all of a sudden our road trip might need four days instead of the two I had allocated. 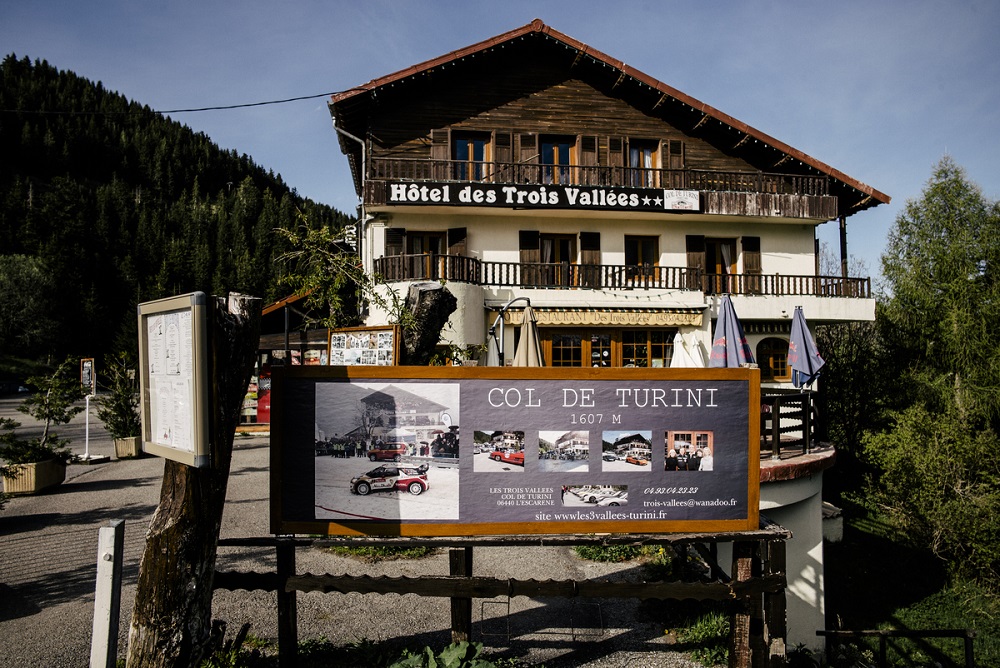 We left an exhausted Monaco, (I do mean that, for Julian and I were not exhausted at all) to endeavour to drive the Col Turini, if only they hadn’t have closed the road leading to it! What could have been a 27km drive ended up another 7 hour drive and by 5 PM we were beginning to reach the splendid pass where looking down you might reveal your breakfast, or looking across you see what is probably one of the finest roads in the world. Cascading up and round the mountains, a small barrier stops you from tumbling down. However, I doubt if that would have stopped us, seeing as we put the car into sport mode, used the sport shift gears, turned the traction control off and practiced cornering with aplomb. Taking it in turns Julian and I drove up the mountain stopping also for photos where ever we could. 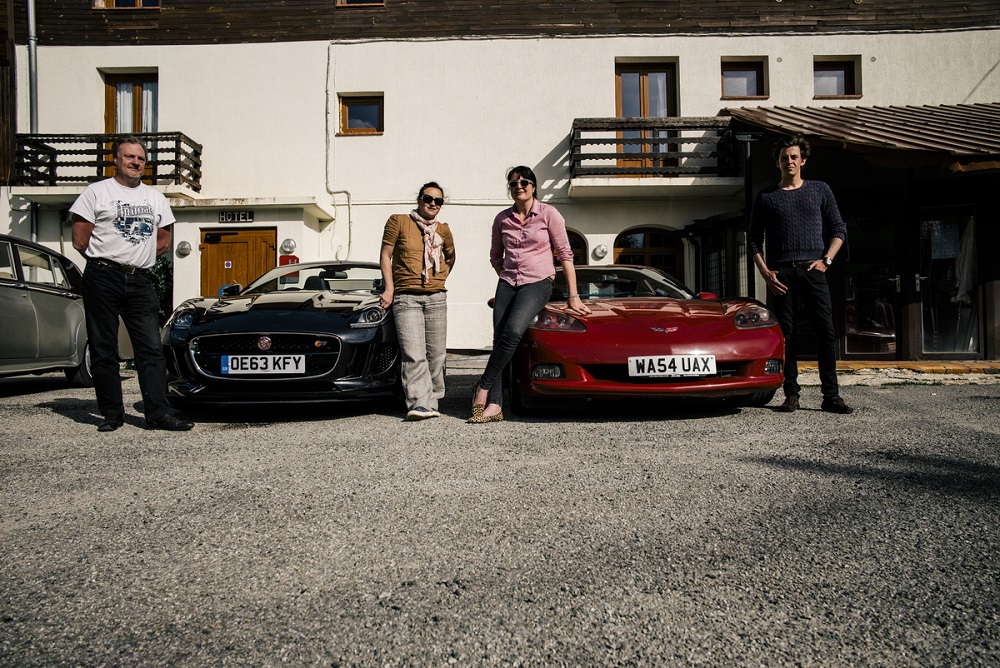 Upon reaching the summit of Turini, we bumped into some friends also on the pursuit of the rally route. I remembered I had a mini tripod in the car somewhere, for a self-timed portrait. I must admit to you all, that I have never used this function on the M (and I have not used the video either), so I was very keen to become the ‘professional photographer’ here. It worked and although such a simple action, I felt euphoric that I persevered with unloading the whole car to find the tripod. 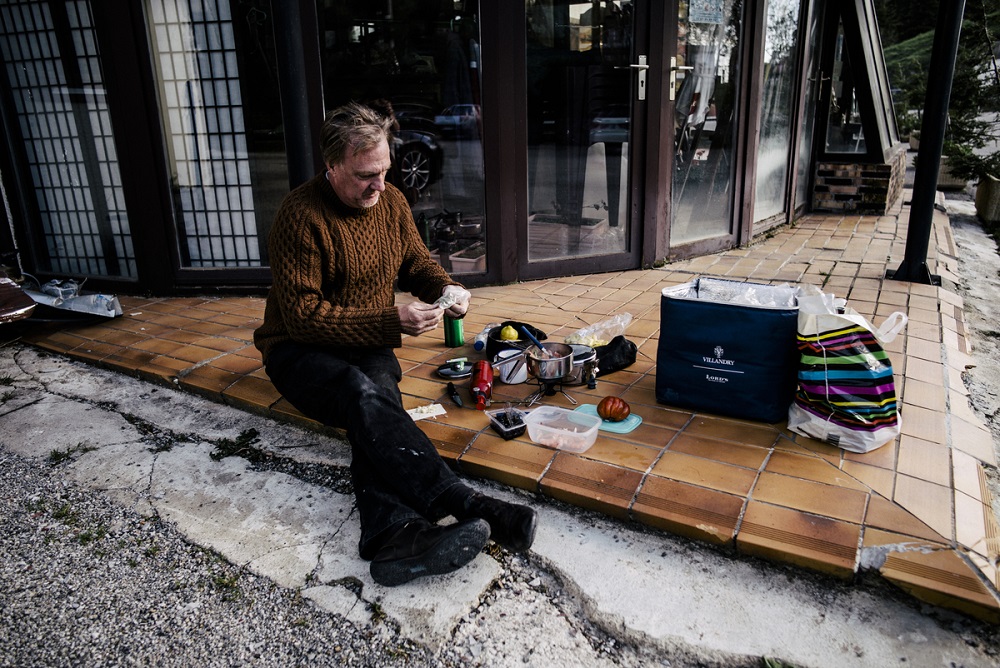 It was dinner time – and we found a place for Julian to cook a gourmet meal on a step, our pasta with reduced prawns sauce, fresh baguette and a glass of wine was a perfect acknowledgement of this beguiling mountain. 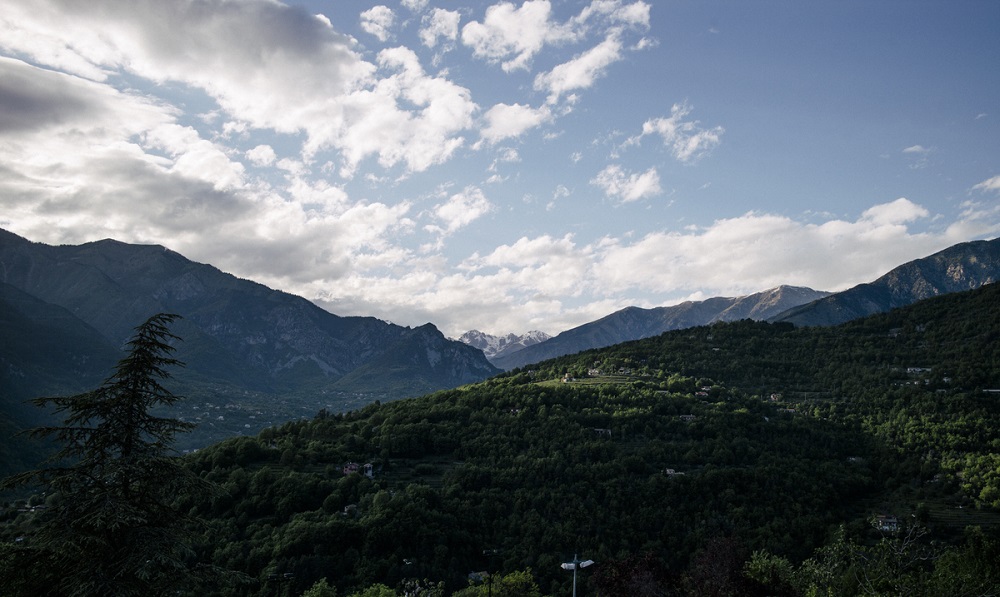 Driving down Turini I felt sad, I knew that now it would be a mammoth race to Grenoble in the Haute Alps  if we were to meet our target of a two day trip. Sad because it would mean less photo stops and for me a road trip means that I can just use my eyes to play on whatever takes their fancy, a chance to allow your brain to disengage and utilise the structure of the range finder, simply a form of jazz or meditation mixed with harmony with the camera. I love my M in this way. I no longer need to think about how to use it. It obviously comes with experience, but I mean, the M contains with the same functionality of my M6; I simply have the camera body as part of my face – so to speak. And as I watched Julian take photos away from his face using the live view on the X Vario, he too was so happy looking. Somewhere (very secret) we stopped for the night and found some cars dumped in a hedge. The next morning having spoken to the owner of the two rather rusty classics (and we seem to have bought them), our road trip to the P&O ferry was not only flying, but equally as enjoyable as the Aix en Provence escapades. 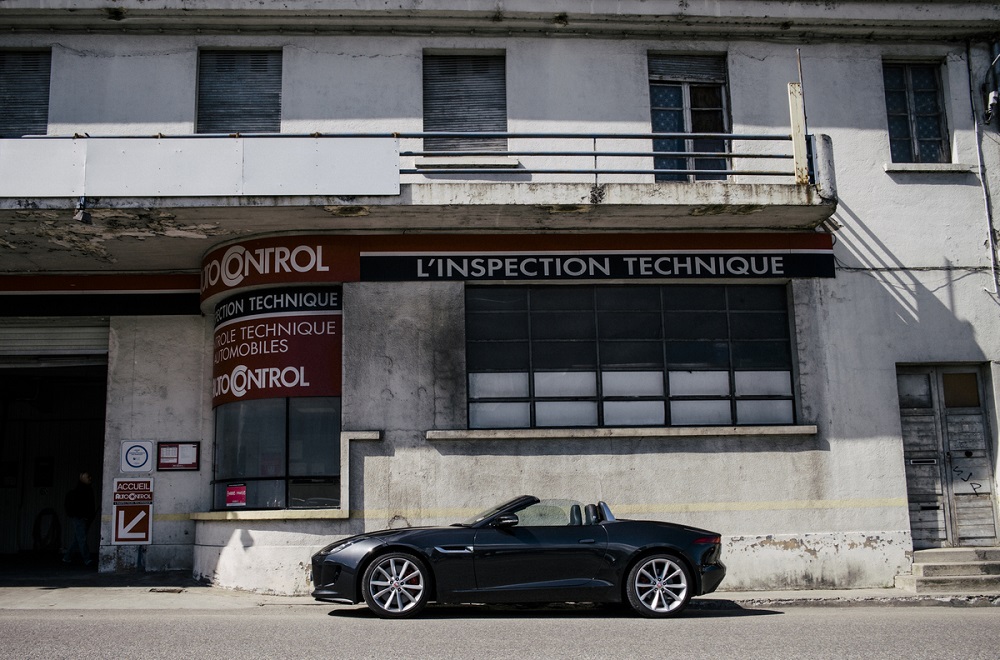 The Jaguar F Type was a perfect car for this road trip, the convertible did have space limitations. Although I had only a bit of camera kit, I managed to keep my clothing to the minimum probably so that Julian could bring his cooking kit instead! The Leica M, just like the V6, allowed you to become at one with your mechanical operation and both highly complex designed objects that are simply divine to look at. I think there is a superb synergy here.
Julian says: My background is in design rather than photography, but I do have an SLR which lingers somewhere on a shelf – so not totally unfamiliar with the art. When Lara said I could take a camera to Monaco, I was just expecting a pocket camera, as I love the restrained simple design language of the Leica range which just imbues quality and knew I would enjoy using it. 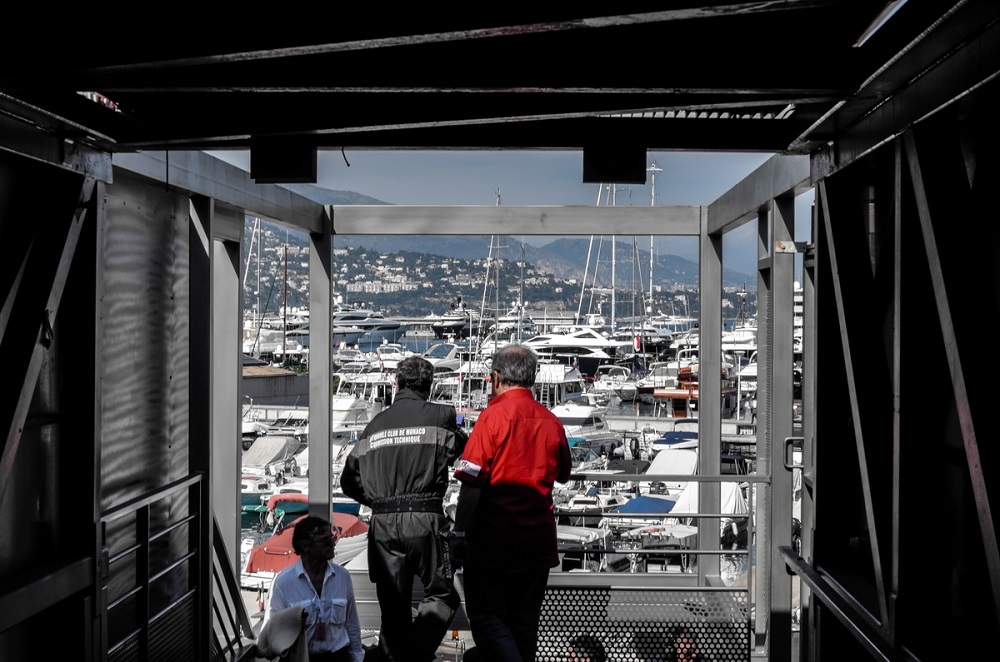 Initially I didn’t want to have the complications of using an SLR; I just wanted to take photos. To my surprise and thrill, I was loaned a grown up camera with potential for me to have to remember my photography light readings, shutter speeds, apertures and all that technical stuff. It was all very familiar and came back to me very quickly. The light meter was so easy being a mid-scale meter and focusing is via a macro inset into the centre of the screen also easily used even without my spectacles. How did the camera cope with track photography at the Monaco Grand Prix Historic? 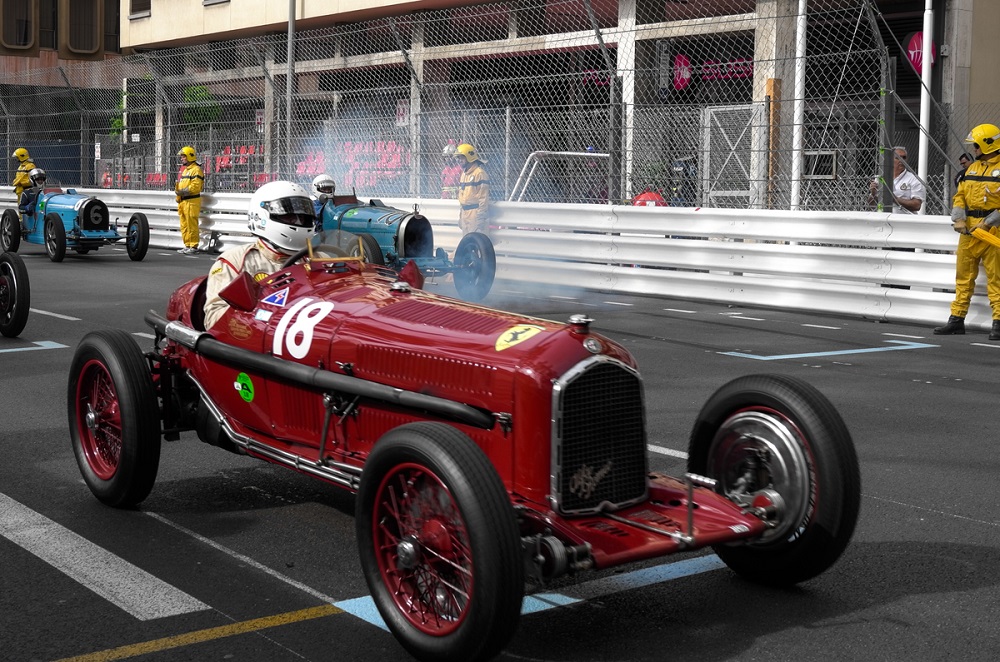 First of all I had to learn about the reaction of the camera and how to pan to keep the cars in frame, after some practice and somehow managing to set the camera to  bracket, I began to get some cars in the three frames within the bracketing. Early on, bracketing meant I at least had something in one of my frames. Once attuned to the camera’s speed of shutter I found myself understanding its timing of delivery. Reviewing the results I got better at both preparation and panning and found myself enjoying this process and taking photos again. 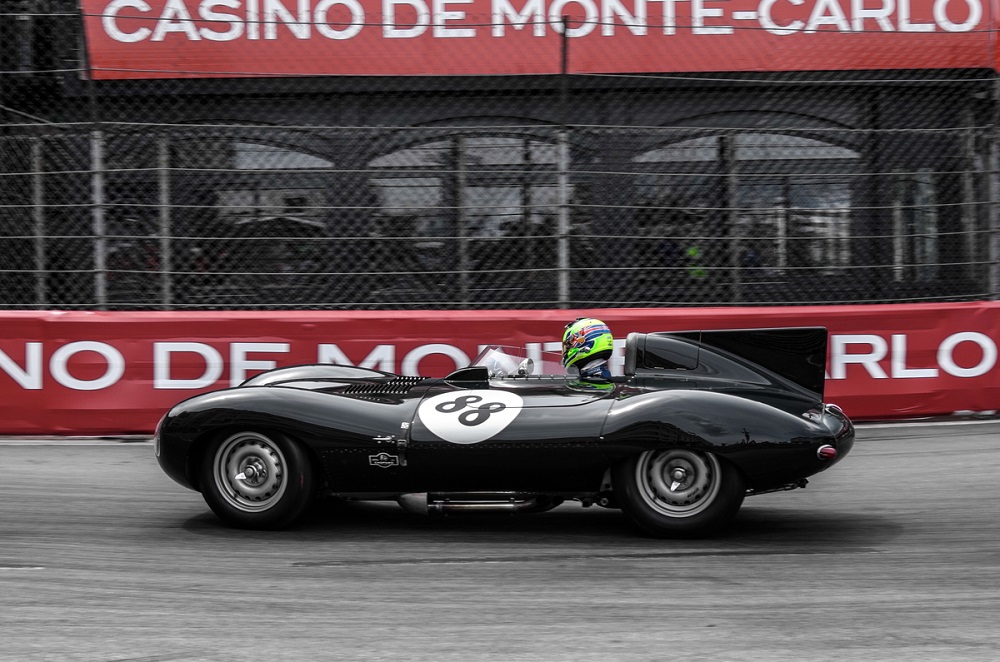 To sum up, the camera was within its performance at this event, but given the choice or budget, I would opt for a camera with a quicker processor. I liked the aperture and shutter functions on top of the camera which meant I was able to fully concentrate on focusing and zoom with the lens. As a relative beginner there was safety in not inadvertently mishandling the lighting settings. 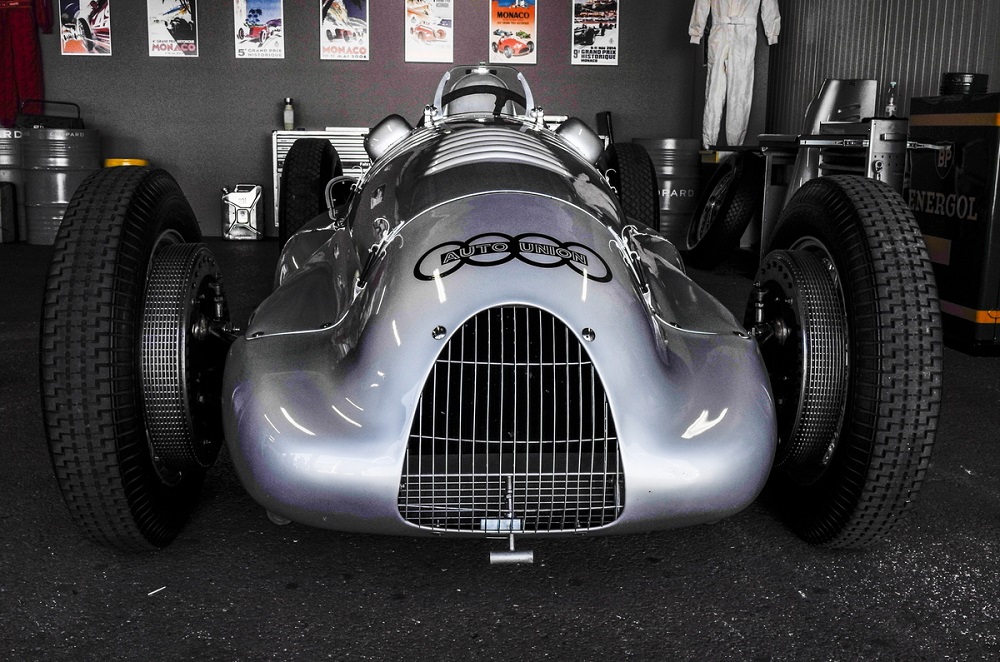 The X Vario immediately gave me such vibrant results I enjoyed using it and began to immerse myself in creating images. Because the camera is quite light for a Leica it was never a chore to carry it and was easily set up for spontaneous journey shots. My initial dismay at its lightness quickly converted to the pleasure and convenience of having a physically lightweight camera with most of the quality attributes of its more advanced siblings. The camera body in the crystalline looking aluminum exudes precision and quality as an alternative finish to the black cameras in the Leica range.
– Lara Platman and Julian Reichman
Lara is currently writing about historic women drivers and their drive to Col Turini was to commemorate Mrs. Victor Bruce who drove from John O’Groats, Scotland to Monte Carlo for the Rally in 1927 passing through the Col Turini mountains. To see more of Lara’s work, visit her website.