This series examines the photographers who are exhibiting at the Leica Galerie at photokina 2014. The focus of this year’s exhibition concept is on impressive photography from the world of music. It embraces all facets of music photography, and today we’re featuring Chris Suspect whose exhibit “Suspect Device” brings us up close and personal with the current Washington, D.C., punk scene. Read on for more information about Chris’s work, exhibit, and insight.
Chris Suspect, the son of a diplomat, was born in the Philippines in 1968. He works professionally as an author and designer in new media, specializing in video, live streaming, pod-casting and audio production. His photographs have been published a number of time in magazines and online. Since 2012, he has been a member of the STRATA photo collective, focusing on street photography and located in Washington D.C. and San Francisco.
He went to his first punk concert in Washington D.C. over thirty years ago. “Back then I didn’t have a camera nor the balls to photograph the bands, punks and skinheads at these shows, but I remember the energy, the fun and the danger that swirled like a tornado at these events.” More recently, Suspect discovered street photography, then he returned to the club culture scene, to photograph the current punk movement in Washington D.C. and Baltimore. This is a phenomenon that reaches beyond the immediate vicinity. “Just look at how many people come out and travel for the yearly Damaged City Festival. It’s pretty amazing to bump into people from Brazil, Sweden, the UK, California.” Suspect mostly works with an M9 and a 35 mm lens. “I love shooting small bands in tight places.” Looking at his pictures, it’s easy to believe him. His first photo book, Suspect Device, has just been published. 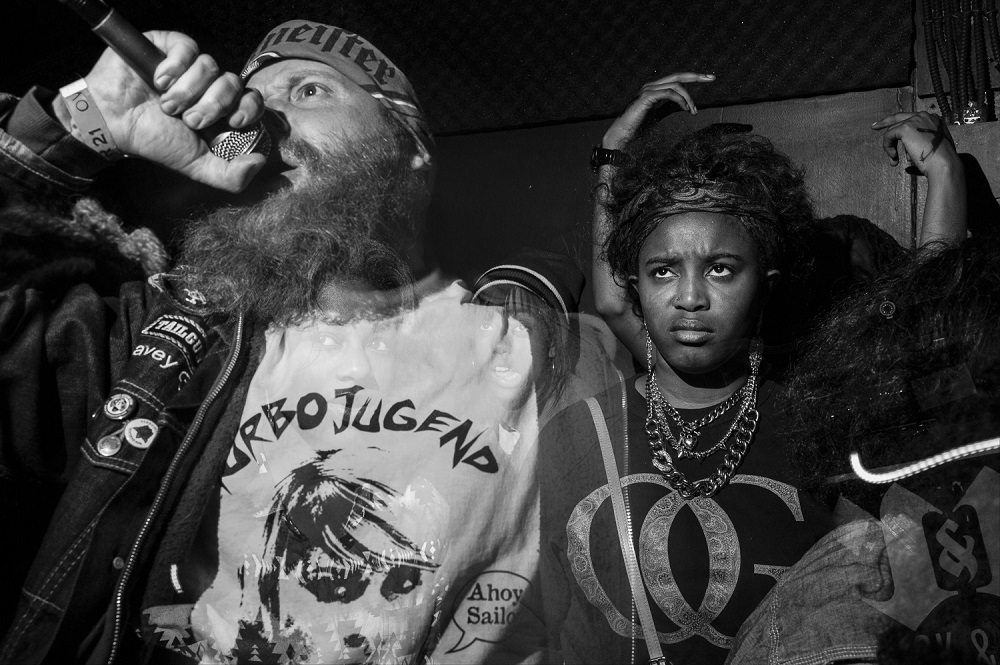 Q: What image is your favorite in this gallery and why?
A: It’s hard to say as each one of those images are special to me. If I had to pick one it would be the photograph of the girl with the annoyed look and the singer from the band Copstabber. I chose that for the cover of my book Suspect Device because her expression is priceless. She and her friends are obviously out of place at this particular hardcore show and she certainly wasn’t into most of the bands that played that night. I used it for the cover because her expression juxtaposes all of the images inside. It’s like she’s saying what the fuck is this shit?! And since I am a fan of self-deprecating humor I thought it was totally appropriate to set the tone for what’s in store for the reader.
Q: What, if anything, do you hope the viewer sees or gains when looking at these images?
A: 30 years ago I went to my first punk show in the DC area. It was Naked Raygun, TSOL, MIA, Government Issue and the Cereal Killers at WUST Hall. Back then I didn’t have a camera nor the balls to photograph the bands, punks and skinheads at these shows, but I remembered the energy, the fun and the danger that swirled like a tornado at these events. For the last four years, I’ve been shooting the current hardcore and punk scene in DC and Baltimore which has been making waves in our area and beyond. The goal of presenting these images is to recreate the same feelings, energy and chaos I felt as a fourteen-year-old at my first shows. Plus, we’ve all seen the famous images from the late 70s and early 80s in the punk genre. I wanted to show that this scene, despite being occasionally co-opted by the mainstream, is still alive and kicking in crappy clubs, bars and basements, perhaps more so than ever before. Above all else this series about the hardcore lifestyle and the kinds of people that seek these shows out.
Thank you for your time, Chris!
– Leica Internet Team
Connect with Chris on his website and Twitter. Govinda Gallery in Washington, D.C. is representing these images and Empty Stretch published his book Suspect Device. Ask Chris questions on Saturday, September 20 at 3-4pm CEST on Twitter using #LeicaChat. See the full schedule of Twitter chats here.