I love my Leica M Monochrom. I think it’s the best full-frame camera for black-and-white digital photography. I also have a Leica X Vario, which I purchased for color photography as a supplement to my M Monochrom. Turns out, the X Vario is also a great little camera for black-and-white photography. Surprisingly, I use it more for black-and-white than for color. And the main reason for that is the outstanding zoom lens that’s attached to the X Vario.
There was some criticism of the X Vario when it was announced. The maximum aperture settings on the zoom lens were thought to be too slow. The wide open settings vary from f/3.5 to f/6.4 depending on the focal length. At its widest 18 mm focal length (which corresponds to 28 mm on a full-frame camera), you have the f/3.5 maximum aperture. That isn’t terribly limiting. However, at its longest 46 mm focal length (which corresponds to 70 mm on a full-frame camera), you have the more restrictive f/6.4 maximum aperture.
You can get around these aperture settings by bumping up the ISO. I’ve found that the X Vario’s CMOS sensor performs remarkably well at ISO 1600. I’m comfortable using ISO settings that are at least twice as high as I was comfortable using with my M9. The higher ISO sensitivity means that f/6.4 on an X Vario can function — in practical terms — much like f/4 does on an M9.
None of this would be important if the lens itself was second rate. In my opinion, the X Vario lens is one of the best lenses that Leica has produced. It compares favorably to my 28 mm Summicron-M and 24 mm Elmar-M lenses. Best of all, it’s an unusual bargain. I like to think of it as a high-quality lens that includes a free camera. It’s also fun to experiment with a Leica-quality zoom lens. I’ve gotten so used to shooting exclusively with fixed lenses that it’s a nice change of pace to be able to vary the focal length without swapping lenses or zooming with my feet.
I had assumed that I would be using the X Vario strictly for color, as I already have a Monochrom that I’m quite happy with; but just as with the M8 and M9, I found that when processing the shots I almost always preferred the black-and-white version. I do like the X Vario’s color rendering. I guess I’m just predisposed to black-and-white photography.
I’m not going to tell you that an X Vario is superior to an M Monochrom for capturing high-quality black-and-white shots. The Monochrom doesn’t have the usual Bayer filter that’s needed for capturing color digitally, so the resulting images from a Monochrom have a higher resolution, broader dynamic range, and greater sharpness than the images from an X Vario.
However, the X Vario can do some things that the M Monochrom can’t do. It has a CMOS-based sensor, so its grayscale tonalities have a distinct look — at least, in theory — compared with the grayscale tonalities from the CCD-based sensors inside the M9 and M Monochrom. The zoom lens provides much more flexibility when you’re shooting in a tight spot. And the color channel info contained in the RAW files gives you additional options when processing your images, even when those images are converted to black-and-white.
More than anything else, it’s different. And the difference can spark creativity because you’re not just stuck in one place — even if it’s a good place. Just knowing that you’re working with a different camera with different strengths and weaknesses can inspire you to try a new approach.
All of the 16 photos were shot with an X Vario with the idea that the images could end up in color or black-and-white. I tend to go out with either the M Monochrom or X Vario, rather than carry both at the same time. For me at least, it seems simpler to concentrate on using one camera at a time and to look for shots that would work specifically for that camera. 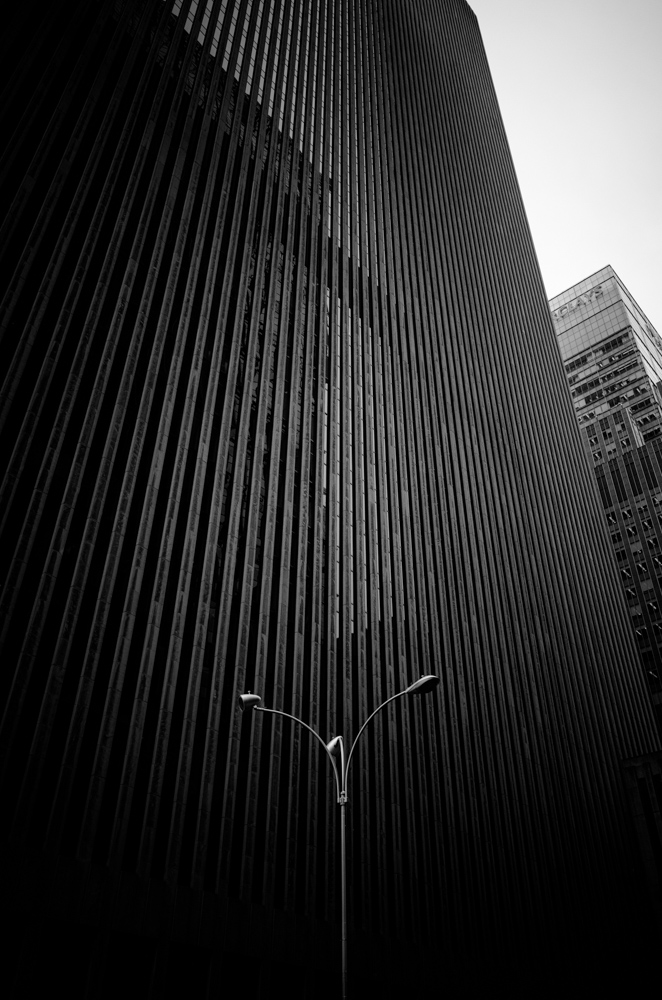 What are the key qualities for a digital black-and-white image? I look not only for a broad dynamic range, but also for the kind of evenness in tone that we associate with 35 mm film. In the photo titled “Manhattan Street #1,” you can see the smooth gradations along the building in the foreground. Even though the X Vario doesn’t have a full-frame sensor, the image is sharp. That sharpness doesn’t have any apparent distortion, though how you process the image can make a big difference in how that sharpness will be perceived by the viewer. You can see a larger version of the photo here on Leica Fotopark. I’ve found that the X Vario images hold up very well at large sizes. 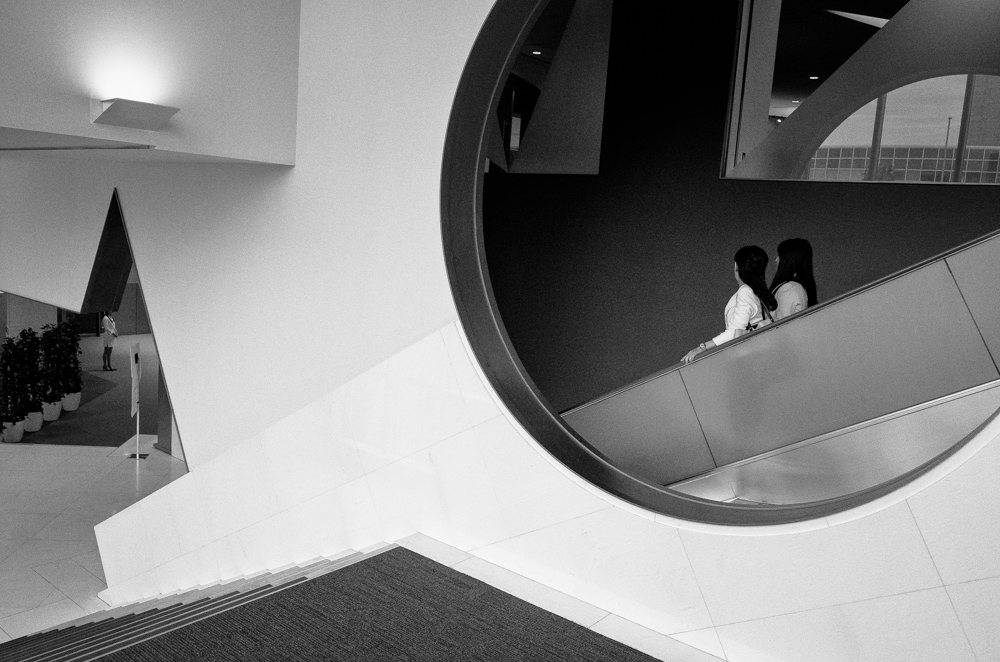 One of my concerns with the X Vario was its performance in low light environments, given the modest maximum aperture specifications for the lens. It’s not just an issue with the camera settings. You also want to be able to increase the exposure level in Lightroom (or similar photo-editing program) without generating a distracting amount of digital noise. With the photo titled “CEATEC Escalator,” the processed image has a fair amount of noise. It was shot at ISO 800, but I pushed it much further in Lightroom. To my eyes, the noise doesn’t overwhelm the tones or composition. This particular environment wasn’t well lit, yet the result is still acceptable. You can see a larger version of the photo here on Leica Fotopark. 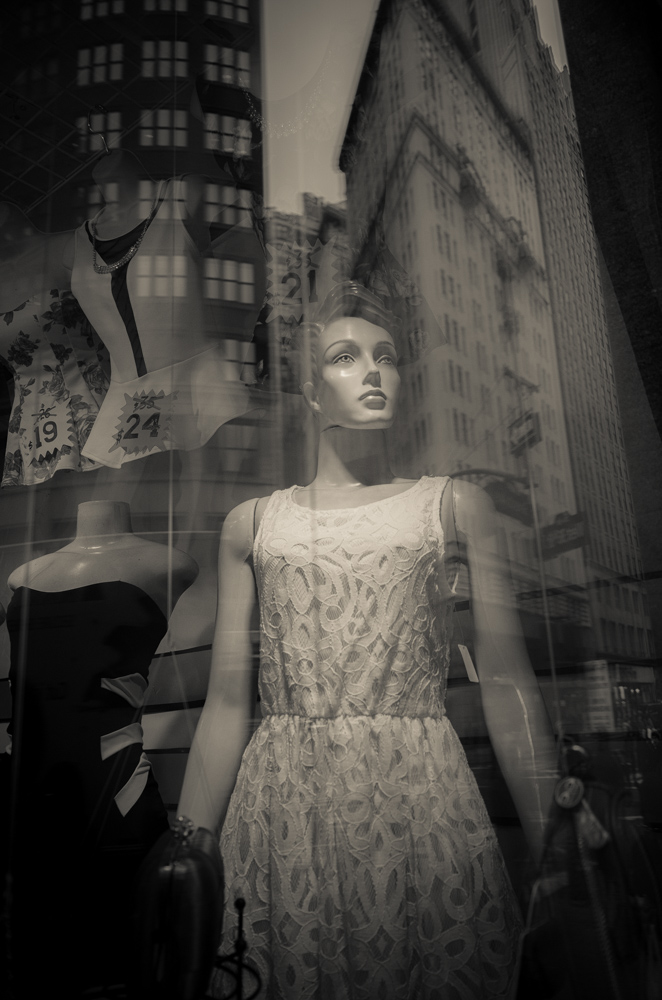 As mentioned previously, one disadvantage to the M Monochrom is the lack of color data when processing the image. Even after you zero out the saturation, the color info can provide additional flexibility when you alter the tonal palette or attempt to recover overexposed portions of the image. With the photo titled “Garment District #1,” I converted the image to monochrome within Lightroom, processed it further using the Silver Efex Pro 2 plug-in, and processed it yet again with Lightroom’s Creamtone preset. I liked the end result so I applied the same steps to similar shots of New York’s Garment District. The X Vario images hold up extremely well to multiple rounds of processing. The core image keeps much of its natural look and film-like qualities even after being battered repeatedly with alterations. You can see a larger version of the photo here on Leica Fotopark. 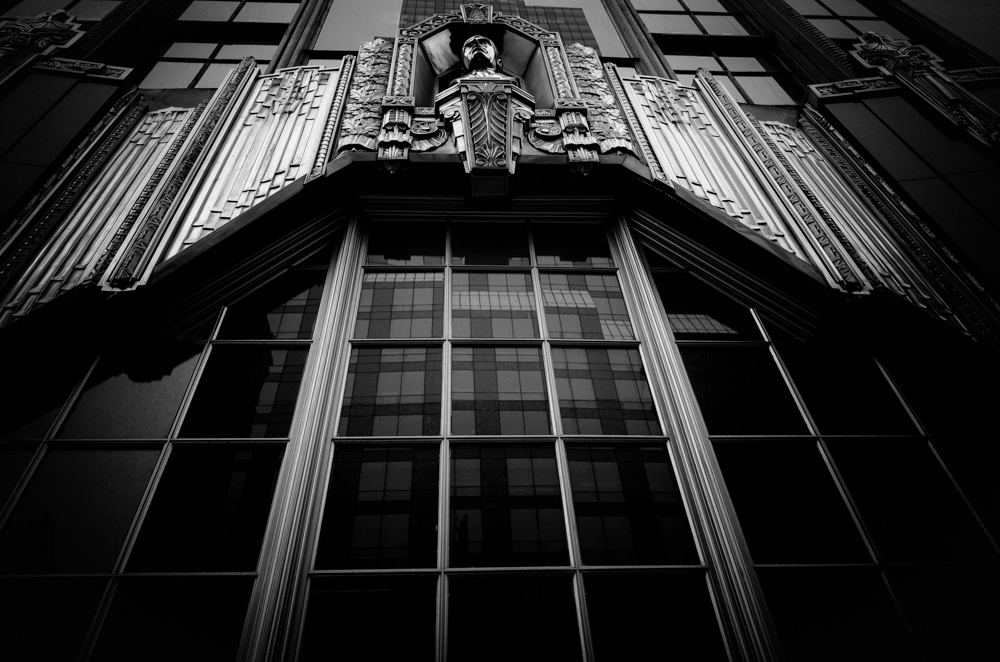 You can process any digital image to be dark and shadowy. The challenge would be for that darker image to retain its sharpness and tonal structure without sacrificing subtle detail. The photo titled Brill Building was processed for a dark, metallic look. Even with that processing, the tonal values and details remain strong. The zoom was set to its widest focal length (18 mm, corresponding to a full frame 28 mm). That focal length combined with the smaller-than-full-frame APS-C sensor provides an expanded depth of field where everything is in sharp focus. And as you can see here in a larger version on Leica Fotopark, this image is remarkably sharp across the entire frame.
When I go through my processed black-and-white photos, I see many X Vario shots that are very close in quality to my M9 and M Monochrom shots. If you’re considering an X Vario for black-and-white photography, I hope that these photos will give you a good idea of what this small camera is capable of producing.
— David English
This is a guest post by David English, who has a day job as a technology writer. He has written articles for CNET, Film & Video, PC Magazine, Sky, and other publications. David started shooting with a Leica camera in March 2009 using an M8.2. He is currently using an M Monochrom and X Vario. You can see his photos at protozoid.com. His main website is davidenglish.com, and his classic film blog is classicfilmpreview.com.