Daniel Flaschar is a German photographer based in Berlin who discovered photography through his parents’ Pentax Spotmatic in his youth. He studied both medicine and visual communications before deciding on a full-time career in photography and now works mostly in advertising as well as portrait and personal reportage. Previously, we spoke to Daniel about his photo shoot at the eyeglasses manufacturer Mykita in Berlin. 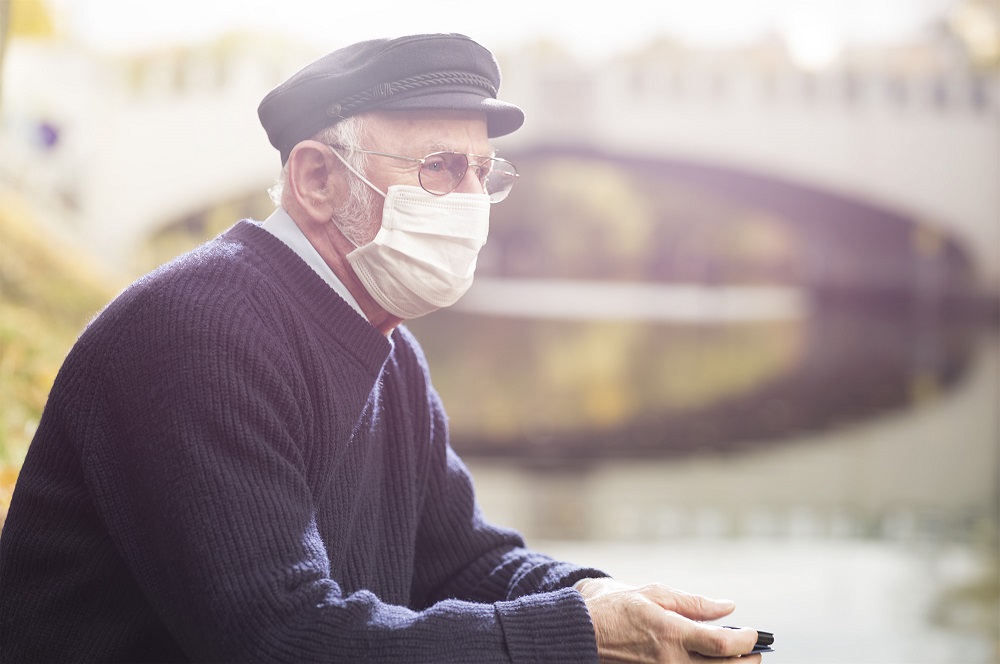 Q: In general, how would you describe your photography?
A: I like it when there is an element of surprise in a photograph, a wink or hint of something that doesn’t quite fit. And I love it when there is something to visually discover, something you will only find if you take the time to look for it. This can be as simple as a stone structure, the eyes of a person or a glint of unique light. To get this I need the right equipment with the technical capabilities to capture more than our eyes can.
In my commercial work, I mostly work with staged scenarios. When doing this, it is very important for me to really sympathize with the person I’m shooting. Of course, often there are time constraints on these shoots, but I have to get a feeling for a person in order to show the subjects emotions or relationship with something or someone. I think a great photograph of people comes from this process of understanding. 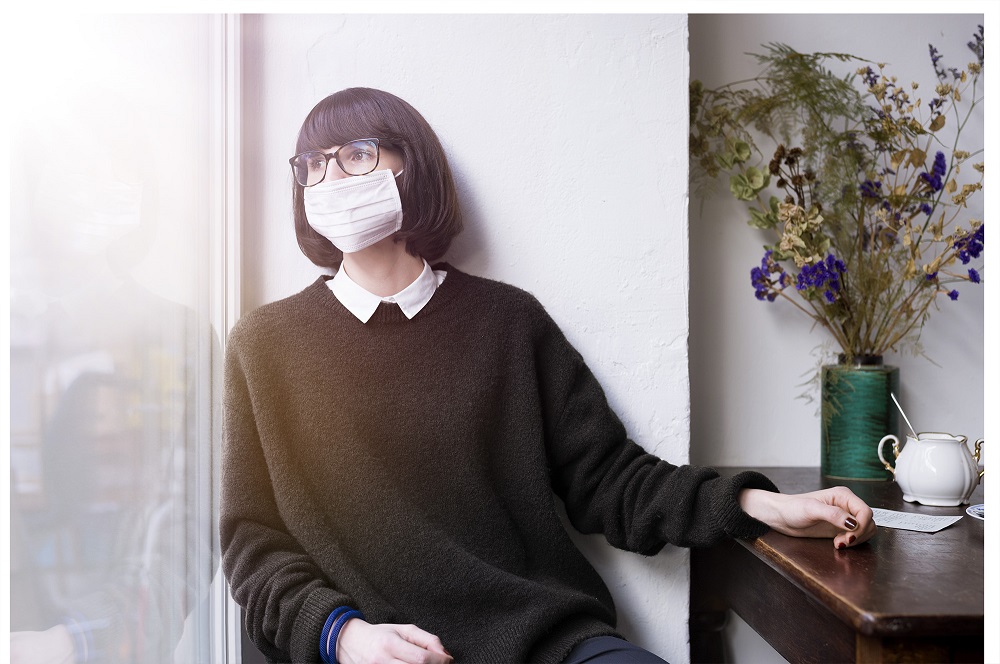 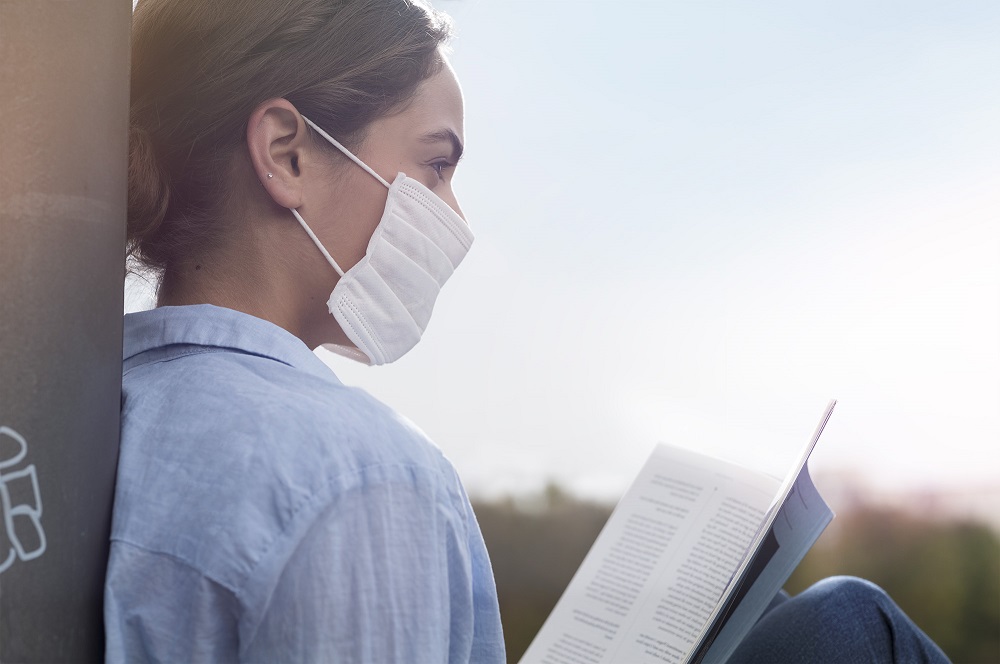 Q: Why did you choose it? In other words, what made is suitable for this project?
A: As I mentioned before, I love to discover details in a picture that are usually not seen with the naked eye. The more information the camera can capture, the better it is to spark this phenomenon. But handling the camera should still give me the opportunity to stay in the moment and capture the surprises you have to look for – especially when taking pictures of people. The Leica S has a large sensor and is quite easy to handle. I find it particularly suited for this.
Also on this project I wanted a certain look, one that makes you feel like you are looking at a well-done commercial picture. The idea behind this was to take photos we see every day – a pretty girl in a car, someone grabbing a coffee, reading a book – and only because of this one element, the mask, surprise! As a result, the viewer should get the feeling that our day-to-day lives could change very quickly, with many people feeling the threat of a pathogen all at once.
The response to the recent outbreaks of swine and bird flu are examples of such waves of fear. And of course Ebola, which was really in the public consciousness in early October, is such a case. When one person with Ebola took a train in New York in October, it became a major issue there. I’m not referring to the real danger here, but more to how our everyday lives might change so quickly. The sudden change of our perspective is what I find interesting. 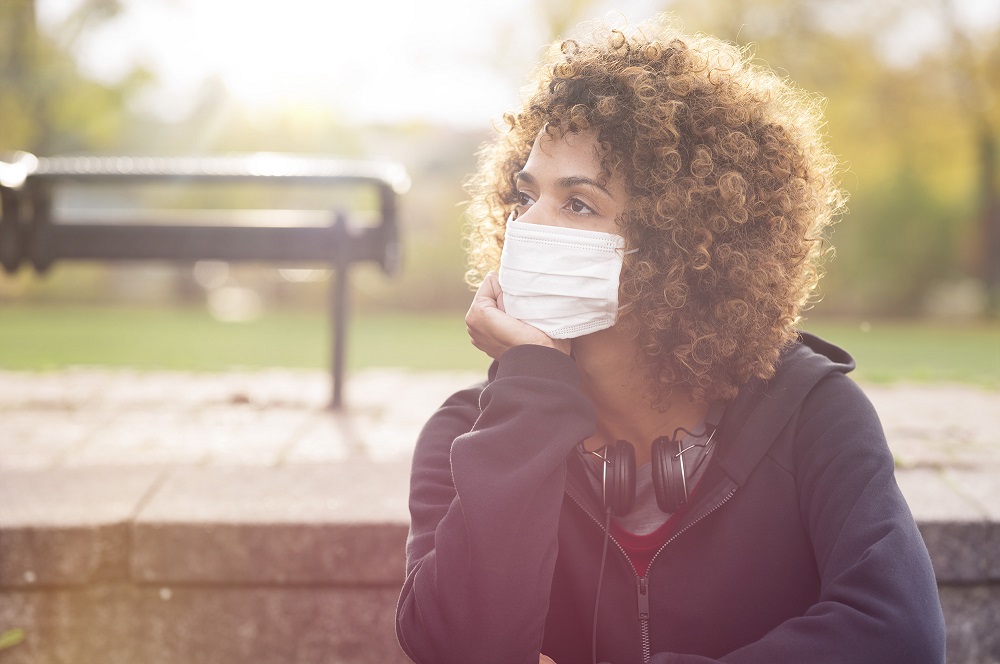 Q: Can you provide some background on this portfolio? Where and when was it taken?
A: I developed the concept in mid-October and after that began scouting the models and locations in Berlin. I worked closely with the stylist Kamilla Richter to find the right balance between the idea and scenes we wanted before shooting throughout November and having my final images finished in early December.
Q: What was your photographic approach to this project?
A: The images should seem as friendly and pleasant as possible. This isn’t about scaring people. So we wanted them to be sunny and slightly back-lit, which to be honest isn’t that easy to do during Berlin winter (haha, the light is terrible in Berlin in November). An important part that Kamilla and I decided was that all the people should be photographed in a portrait style but involved in everyday situations that could take place almost anywhere. 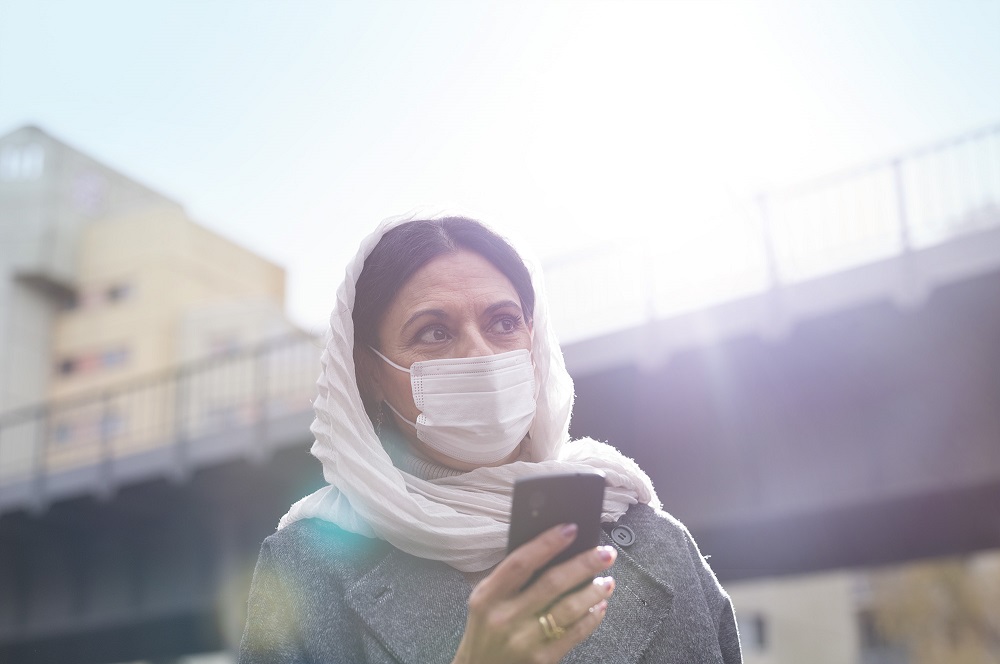 Q: You cited the recent Ebola case in New York City that created a media frenzy, if not an outright panic. How do you think the images in this portfolio with the surprise element of each person wearing a protective mask, expresses this feeling, and what overall message or feeling do you think these images convey to the viewer?
A: The images are not meant to convey a feeling of panic. The masks are meant to convey the idea that a small change in circumstances could cause a drastic change in everyday life, in both our behavior and thinking. I hope that viewers who look at these images can picture themselves in the same scenarios and imagine how something like this might feel. 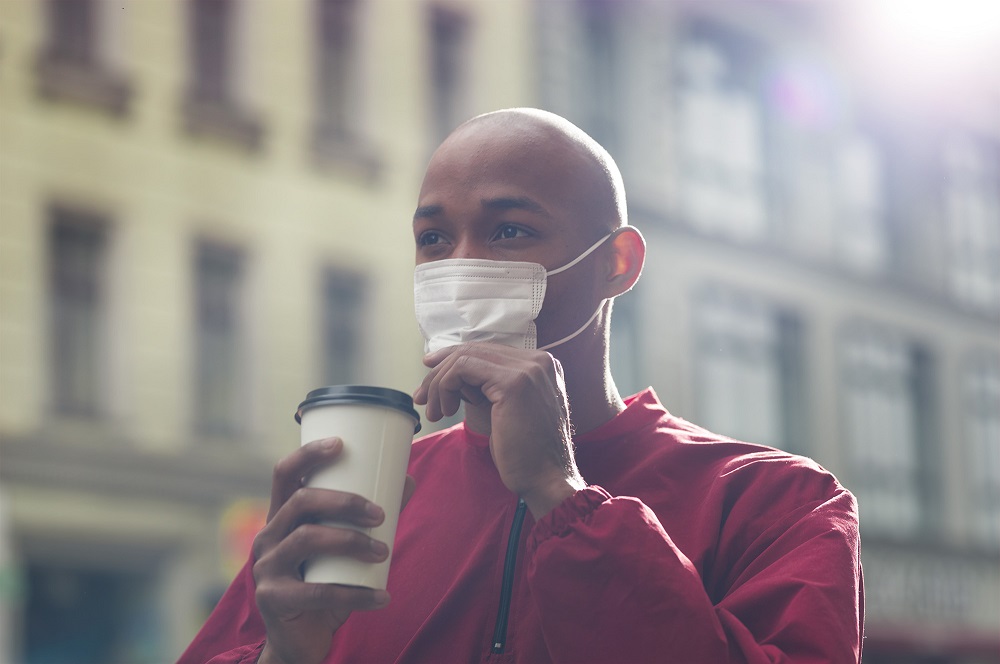 Q: Many of the portraits in this portfolio are low-contrast images with shallow depth-of-field and soft backgrounds. Why did you choose to capture and present them in this way, and did you generally shoot these images at wide apertures to achieve that effect?
A: Yes. I didn’t want the people to be connected too much to their environment. That’s the reason why I used a softer approach so as not to place the people too firmly in the photograph and keep the feeling open. The viewer should get just the idea of the scene. 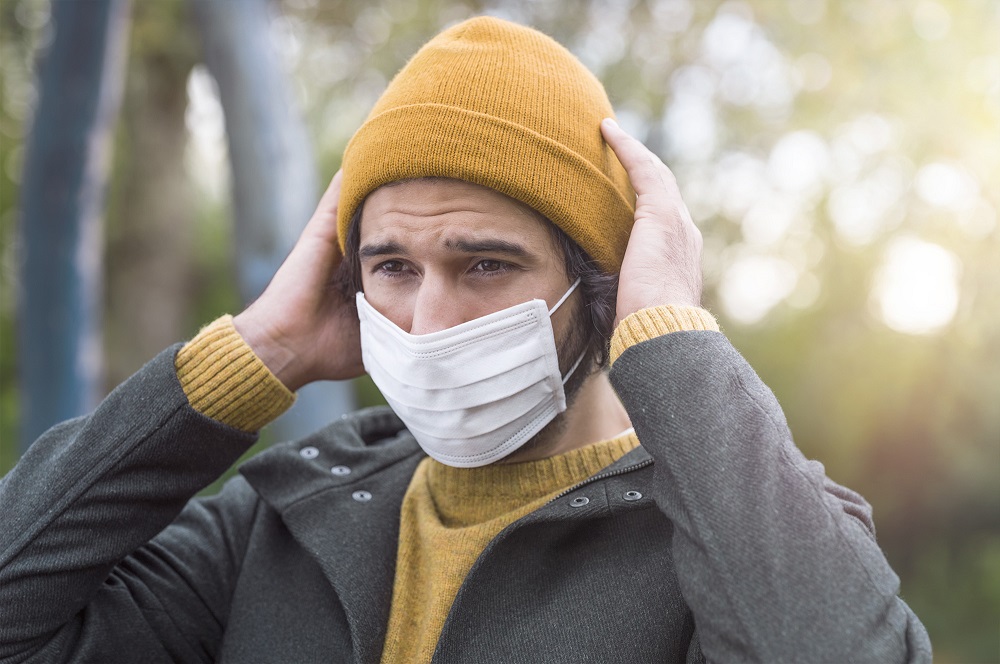 Q: The masked subject in this image has his hands on his hat and a furrowed brow, indicating tension. The expression in his eyes conveys anxiety or worry, yet the setting and soft background seem peaceful and even serene. What do you think this image conveys to the viewer and what were you trying to capture or express?
A: I wanted a hint of tension but nothing dramatic because I wanted him to appear as a person who finds himself in a new reality with a new set of facts. The low-contrast and shallow depth-of-field were ways to keep the viewer from feeling too much drama. 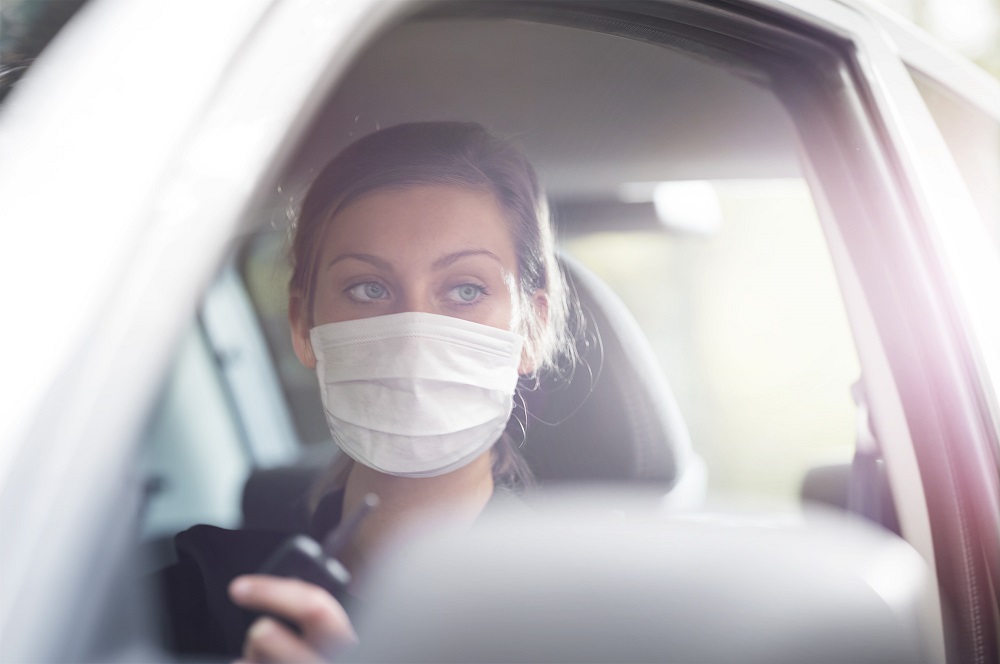 Q: This image shows a young masked woman sitting in a car. The depth of field is very shallow, blurring out the car’s sides-view mirror and window frame, and focusing attention on the woman’s eyes that suggest she is deep in thought about something other than her immediate surroundings. Do you agree, and what were you thinking when you pressed the shutter release?
A: Just like the young man in the photograph mentioned above, the woman represents someone who finds herself in her familiar surroundings, yet must evaluate everything in a new way. I feel that this girl’s eyes express that perfectly.
In fact, that was a very interesting point throughout the whole project. When I was photographing and seeing different responses in my subjects, it became important to be balancing the ways their eyes communicate. I knew that finding the right amount of calm would make the idea work. So I worked with make-up artist Miriam Jochims to keep things natural and calm but still expressive, which she did wonderfully. 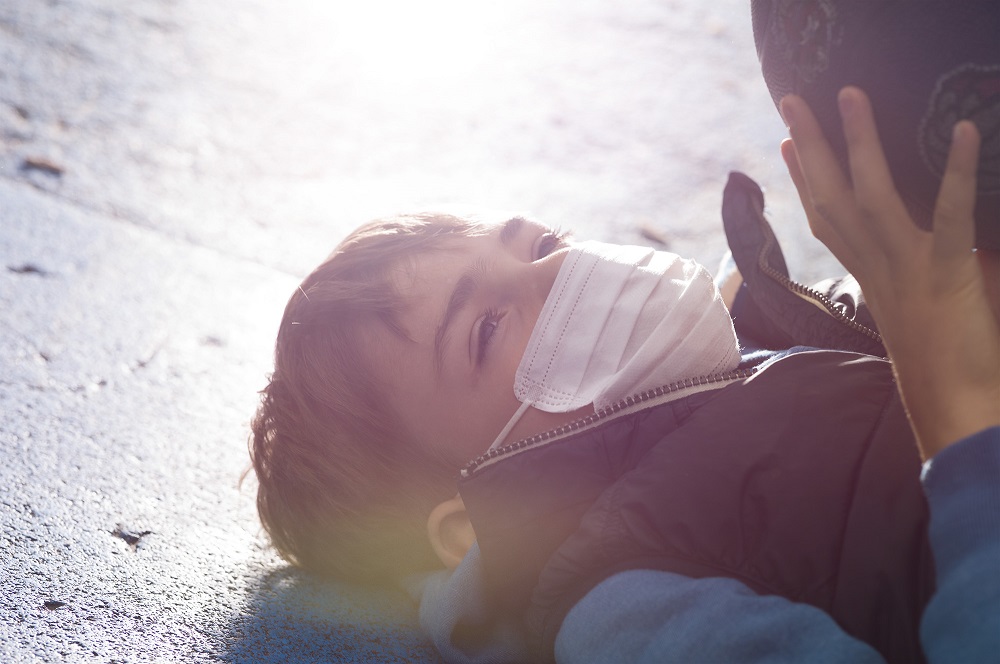 Q: How do you see your photography evolving over, say, the next three years, and do you plan to explore any other genres, such as documentary photography, photojournalism, or street photography going forward?
A: I am always trying to develop my personal work besides my commercial jobs. Some are staged like the project we are talking about. Others are more documentary based. But I always try to have a direct emotional connection with each of them. At the moment I am preparing a long-term, documentary project in which I will photograph groups of young people.
Q: What are your future plans for this project (book, exhibition, etc.)?
A: We’ll see! I’m open for everything.
Thank you for your time, Daniel!
– Leica Internet Team
Check out Daniel’s website.