Knut Skjærven: Thank You, Mr. President, For Sending Your Secretary of State

Knut Skjærven met Andrew Eames, Elliott Erwitt, Will McBride, Thomas Hoepker and U.S. Secretary of State, John Kerry, during 10 days in Berlin. Below, he shares his story.
We split up at Checkpoint Charlie.
Andrew Eames went right. He needed to go back to the hotel to prepare for an article on the tunnel system under Berlin for the 25 year anniversary of the fall of the Berlin Wall coming up a few weeks later. Eames is one of the celebrated British travel writers working for, among others, the Financial Times.
He had flown in from London to interview me on street photography. We walked the streets of Berlin on and off for two days and you can read about it here.

That done, Eames needed to find the nearest U-Bahn station and it was right around the corner from what used to be famous Cafe Adler, which was now made into an anonymous, mass-producing cafe for hordes of tourists coming to Berlin even in the late days of October.
Cafe Adler used to be John le Carré’s favorite hang out in Berlin. There he could follow the traffic from east to west and from west to the east, writing spy novels, sipping Cold War coffee.
Not any more. The once famous Cafe Adler became less famous in 2008 when it closed down for good. I managed to visit once before the world changed at that historic corner.
Eames gone, I went left for a stroll up Friedrichstrasse, into what once was the old East. Crossing the wall demarcation laid down as a line of bricks in the pavement and in the road.
No more meetings that day, I walked to see what might happen. I am always lucky when I come to Berlin. Walking the French way, as Charles Baudelaire would have suggested, “We are surrounded by the marvelous, which sustains us like air itself, but which we do not perceive”. I gambled that I would perceive something.
Passing Lafayette I turned right down Französische Strasse towards Gendarmenmarkt, where I found a crowd of cars, policemen and other people in front of Borchardt Restaurant, one of the finest restaurants in Berlin.
I could not pass on the pavement because of people.
What is happening here? I could see that the entrance to the restaurant on the other side of the street was well protected. “Jim Kerry is here for lunch,” a German woman with a little child told me. “My husband is by the entrance and he told me. You see him in the red coat. He is very interested. He always comes to events like these.”

I stayed some 10 minutes to see what happened. There were movements around the entrance and people started coming out. 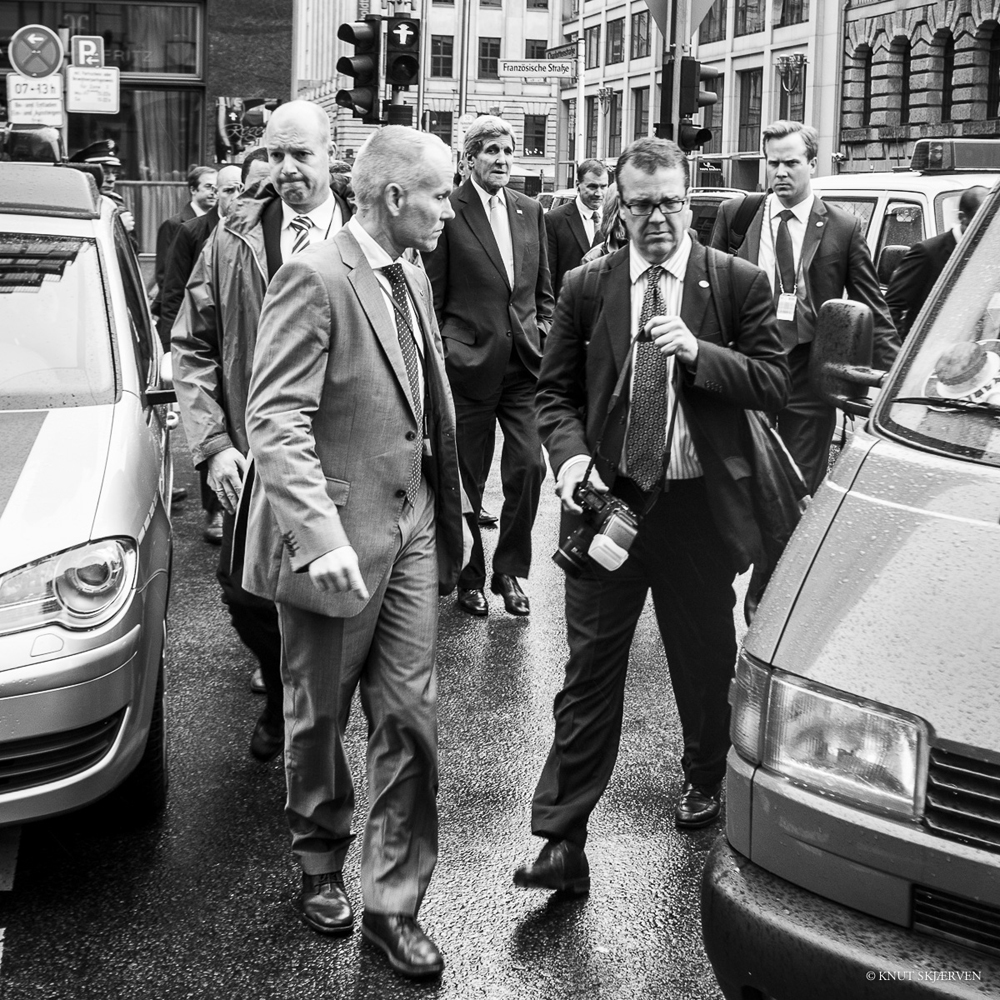 Not Jim Kerry, I thought but John Kerry, United States Secretary of State and Obama’s traveling ambassador. I spotted his white hair from my side of the street. 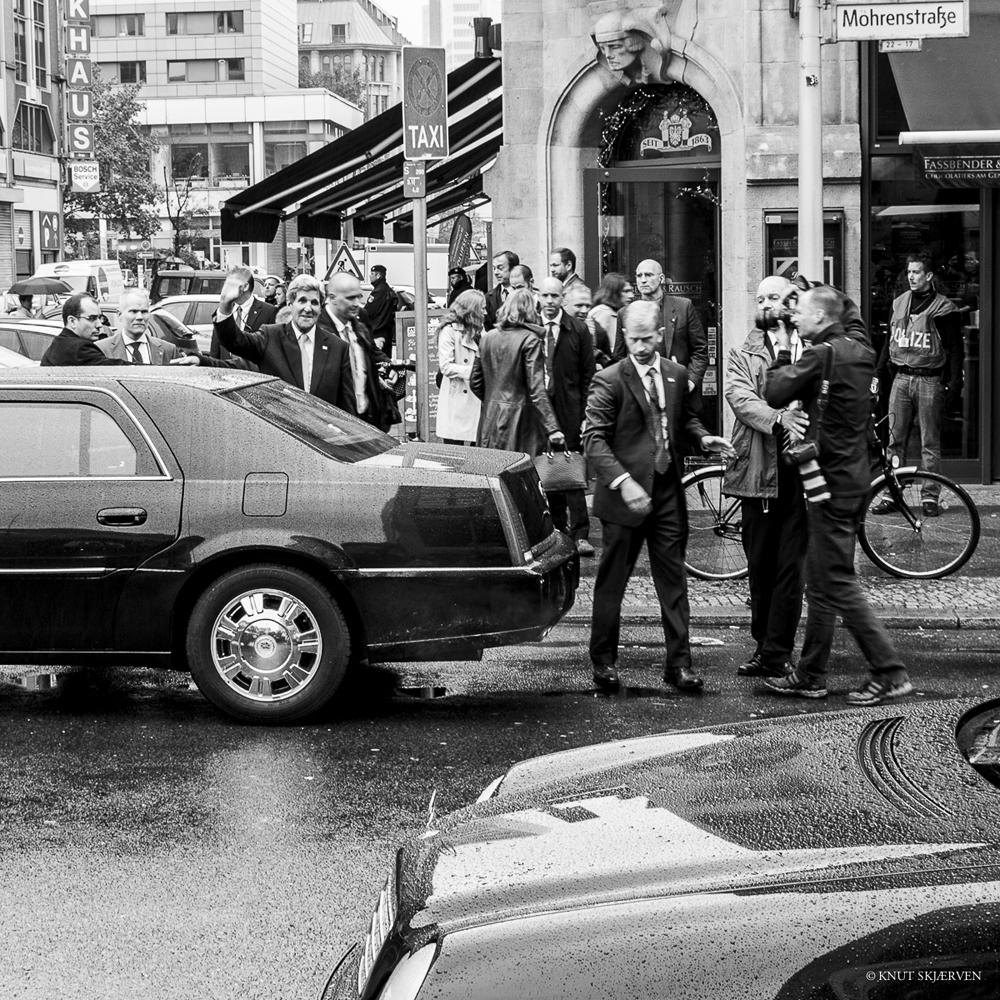 He passed the waiting limousine and crossed over to my side. Well protected by security people and German officials, I knew I would not get in close. So I followed at a distance trying out my paparazzi instinct. 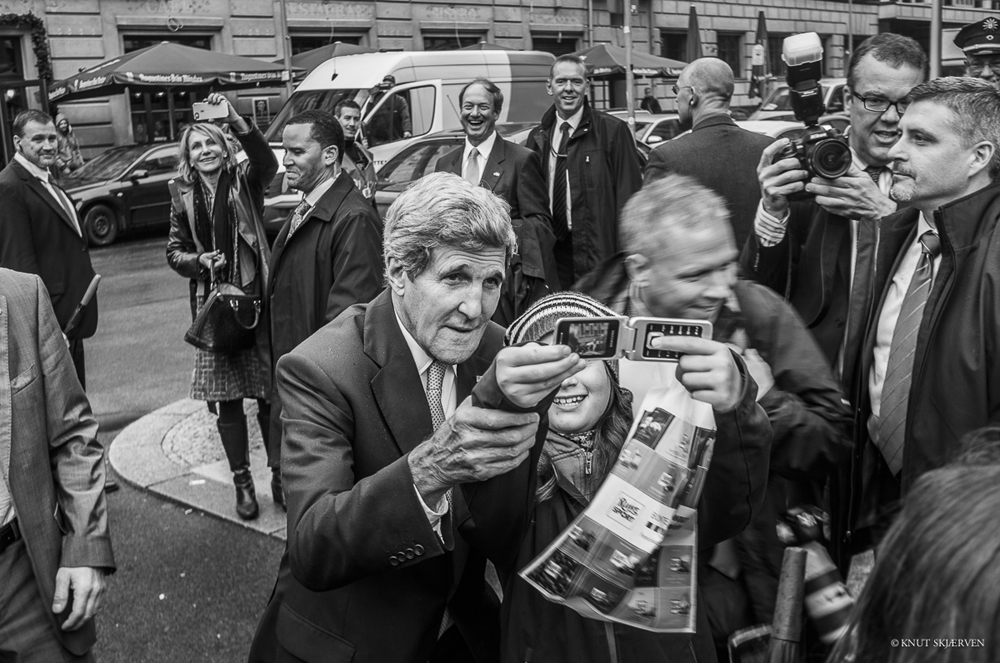 Then serendipity struck. The Secretary of State caught the eyes of two girls and their mother trying to get a picture. He suddenly stopped, turned back and made a halt right in front of me. No security, stray cameras or officials to block my view. Mr. Kerry continued and went into the chocolate shop at the next corner. He came out a bit later bag full of chocolate. My adventure as a paparazzi photographer ended there. I got my picture.
A few days later there was the grand opening at C/O Berlin. Just inside the building someone asked, “Excuse me sir, are you by any chance Thomas Hoepker?” I took it as a complement forgetting the age difference. “No, sorry. I am not.” 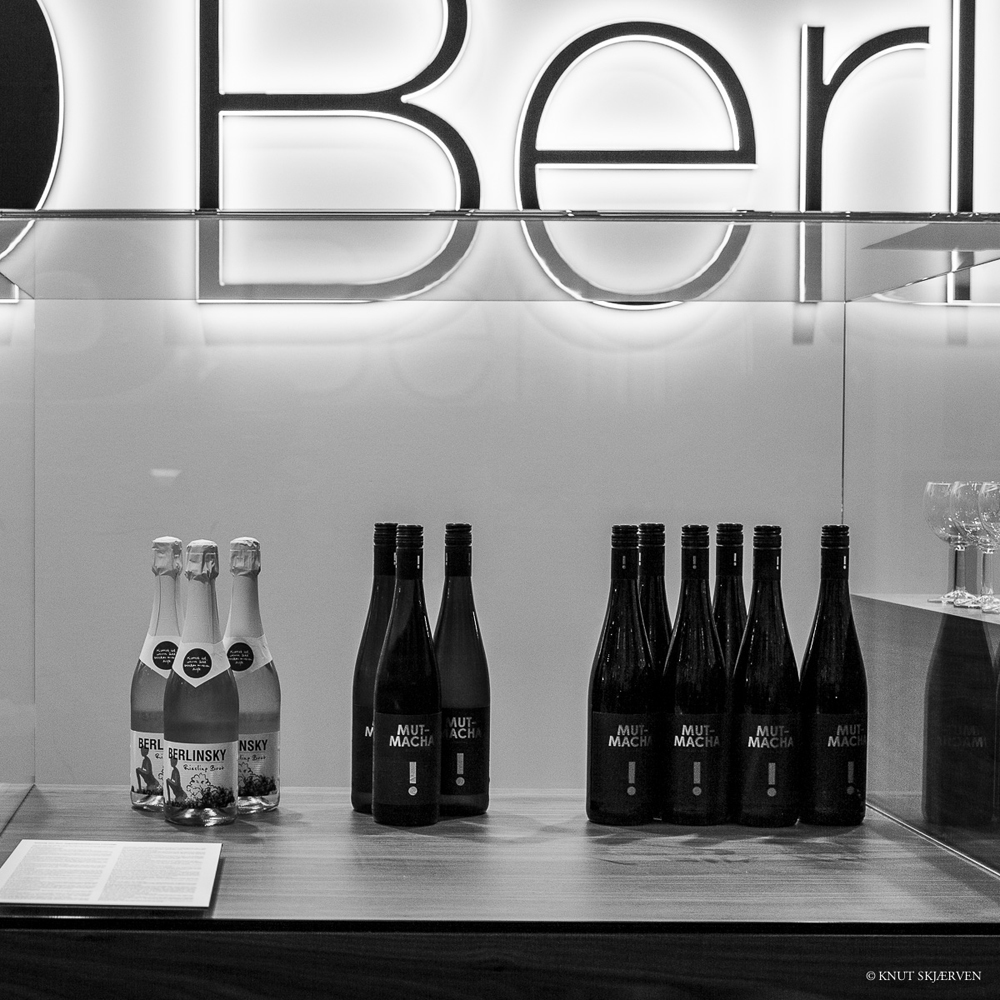 I had managed to have my name on the list to get invited to the grand opening taking place a day before the public opening. I should have been on my way back to Copenhagen then, but I stayed a day extra at a nearby hotel. The new location was just great: Amerika Haus at Hardenbergstrasse close to Bahnhof Zoologischer Garten in Charlottenburg.
If John F. Kennedy was in Berlin, this is the house he would have wanted to hang his coat in, an icon in itself. Since I stayed in the vicinity, I was able to follow the preparations over the last days before the opening. They made it but it was close. 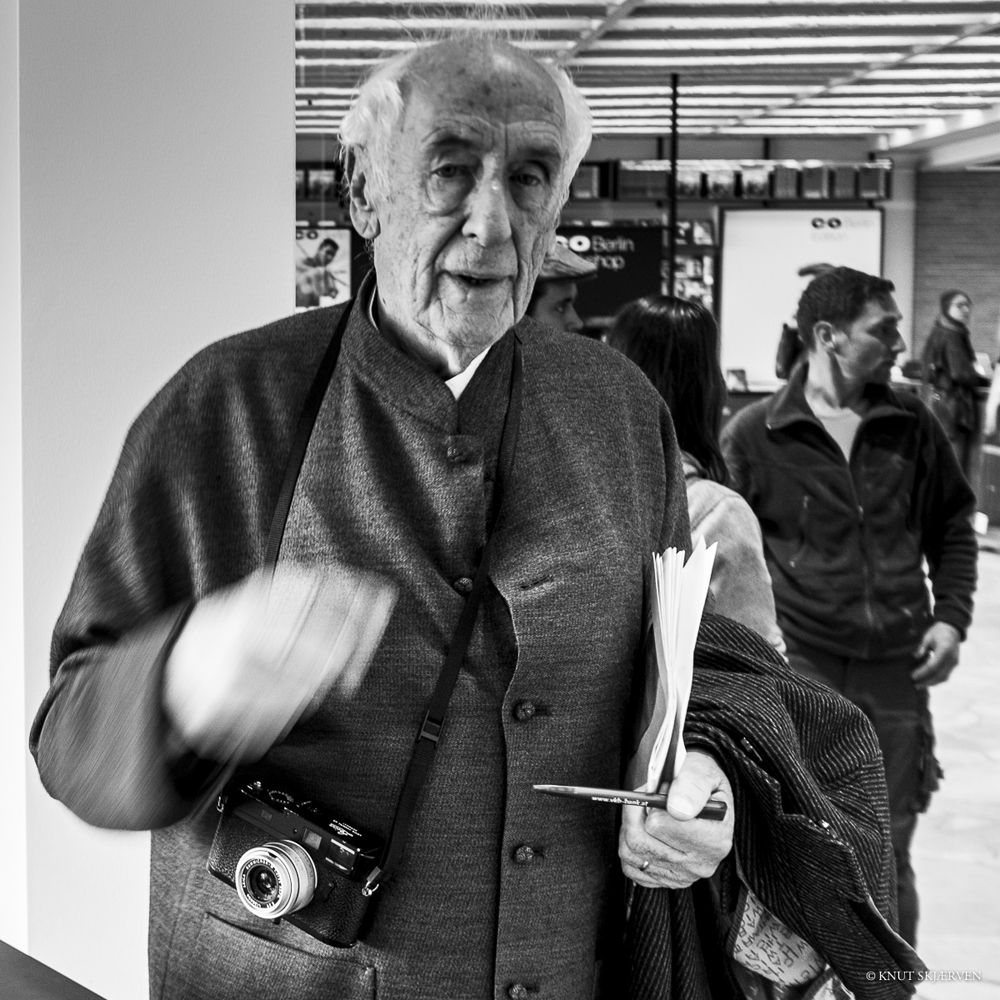 I knew that important people would be there. Names you read about in books and who you would never be able to meet again, not the three in ensemble, not likely. Elliott Erwitt (1928), Thomas Hoepker (1936) and Will McBride (1931).
McBride was the young American, who fell in love with Berlin more than 50 years ago. Out of military service, he moved to Berlin and stayed there. He was the first photographer to have his photographs shown in Amerika Haus, when it was built in 1957. Add to that a wide portfolio of Magnum photographs. The list of photographers would be too long to mention. For the grand opening, it was the living and the present that mattered.
They were there, all right (plus Thomas Hoepker’s double).
Ask me if we live in interesting times and I would have to say that we do.
In the span of a long week: Andrew Eames, Elliott Erwitt, Will McBride, Thomas Hoepker; and first and foremost U.S. Secretary of State, John Kerry. Thank you, Mr. President, for sending your Secretary of State. That really made my week. The next time I would not mind being invited for lunch, particularly if it is at Borchardt’s.
– Knut Skjærven
Knut Skjærven, is a Norwegian photographer, reporter and researcher working out of Copenhagen, Denmark. He runs a number of sites on street photography and visual communication. He does workshops and private coaching in street photography and visual communication.
You can contact him at knut@skjaerven.com or visit his emerging webgate On Street Photography.