Lisa Leone: Capturing the Feeling and Emotion in Spaces

Bronx-born Lisa Leone graduated from the Rhode Island School of Design where she majored in photography. She began her career as a photographer shooting musicians such as Moby, Lauryn Hill and Maxwell, as well as personalities like Debi Mazar and Spike Lee. She worked for British Vogue and VIBE where she was a contributing photographer and columnist for two years. While shooting stills on a music video the director asked Lisa to shoot B-roll. So began her career as a cinematographer shooting music videos for artists including TLC, D’Angelo and The Brand New Heavies. Lisa worked on Stanley Kubrick’s last film “Eyes Wide Shut” and directed films such as “Exactly,” “Woinshet” and a series of short films for Tommy Hilfiger’s “Dreaming” campaign.
In July 2012 “Union Square,” a film Lisa shot, opened theatrically starring Mira Sorvino and Tammy Blanchard, directed by Nancy Savoca. In May 2012 her solo photography show opened at HVW8 Art + Design Gallery in Los Angeles. The show, which chronicles the beginnings of NYC hip-hop in the ’80s and ’90s, traveled to Milan’s Galleria Patricia Armocida and the Andenken Gallery in Amsterdam. In September 2014 the show opened at The Bronx Museum of the Arts, accompanied with a book published by Minor Matters.
Lisa Leone currently serves as Vice President of Artistic Programs for the National YoungArts Foundation. This is the compelling story of how she developed her unique style and her distinctive approach to creating intimate and incisive portraits of contemporary artists and musicians.
Q: What camera equipment do you generally use?
A: For the photos in my book and the exhibit at the Bronx Museum I used a Leica M6 and M4-P.
Q: What is it that you find especially compelling about shooting on film rather than digital, which is now the dominant medium? Have you ever considered shooting with a Leica M9 or a Leica M, digital cameras that provide the essential Leica M shooting experience?
A: I love the texture of film. When you enlarge it you really feel the grain; it almost adds a level of humanity. I have a lot of young photographers look at my prints closely, and ask, “So there’s no retouching? This is how it printed with nothing done to it?” It’s kind of shocking. I’d love to shoot with the M9. I’m working on a new series of photos; it would be great to experiment with it. I’ve played with the Leica Monochrom, which is great.
Q: How would you describe your photography?
A: I photograph people — artists, musicians. People have said my portraits are very intimate, unguarded. I prefer to take a more naturalistic approach.
Q: Can you explain a bit more about your approach to photography?
A: I try to capture the feeling and emotion in the space I enter. I spend time with people before picking up my camera. A photograph can capture an entire story in one image, so it’s important to connect with where you are and whom you’re with. There’s a sensitivity that one must have. 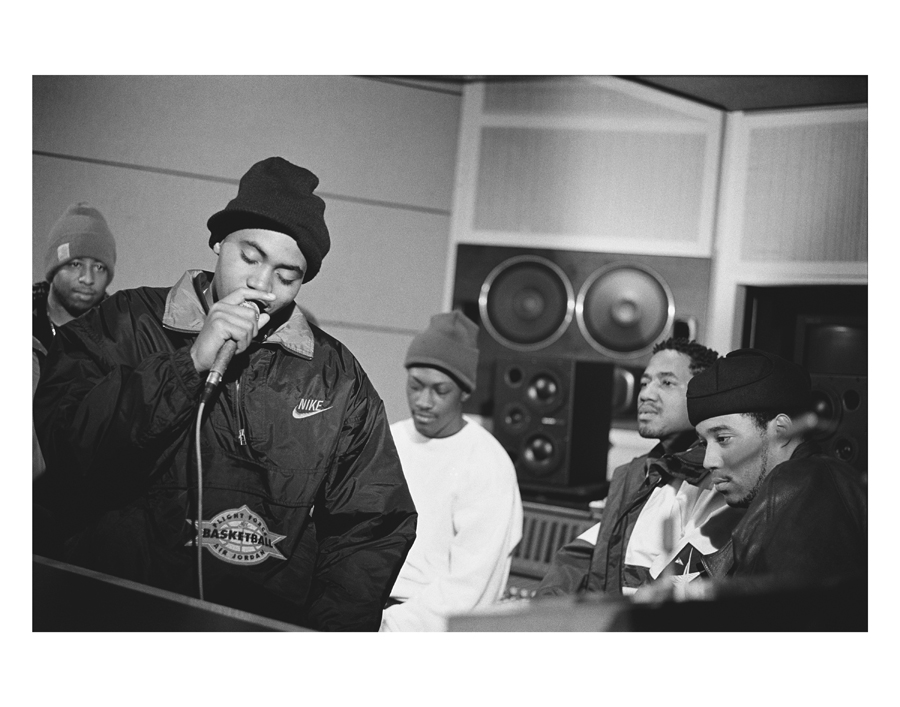 Q: How would you compare still photography to shooting and/or directing a movie? What do you feel are the strengths or esthetic and operational advantages of each of these media that causes you to pursue both rather than dedicating yourself to one or the other?
A: One of the reasons I moved toward the moving image was the collaboration aspect … it takes many people to make a film. I enjoy that process. But, after a while, I missed the quietness and intimacy of still photography, just you and the subject. So now the balance between the two is perfect for me.
Q: You worked with the great Stanley Kubrick on “Eyes Wide Shut,” his last film, and before his untimely death he became your mentor. What are a couple of the most important things you learned from him?
A: I learned so much from Stanley. For instance, when I was scouting for second unit we had numerous discussions about composition – what makes a great frame. He taught me how to really see. He pushes to where you make new discoveries about yourself. One of the most important things I learned though was that it’s okay to say, “I don’t know.” There were plenty of times we’d be standing on set and he’d just say calmly, “I don’t know.” That was very helpful and freeing when I went back to my own work.
Q: Half of the images in this portfolio are presented in black-and-white. What are some of the characteristics that attract you to the black-and-white medium? How do you decide whether to shoot or output a particular image in black-and-white or color? By the way, which films do you typically use, and why?
A: Black-and-white is timeless. You can get lost in the photo, leaving more to your imagination. I can’t say why I chose black-and-white over color; it’s an instinctual thing. I prefer shooting Tri-X rated at 200 – nice rich blacks. 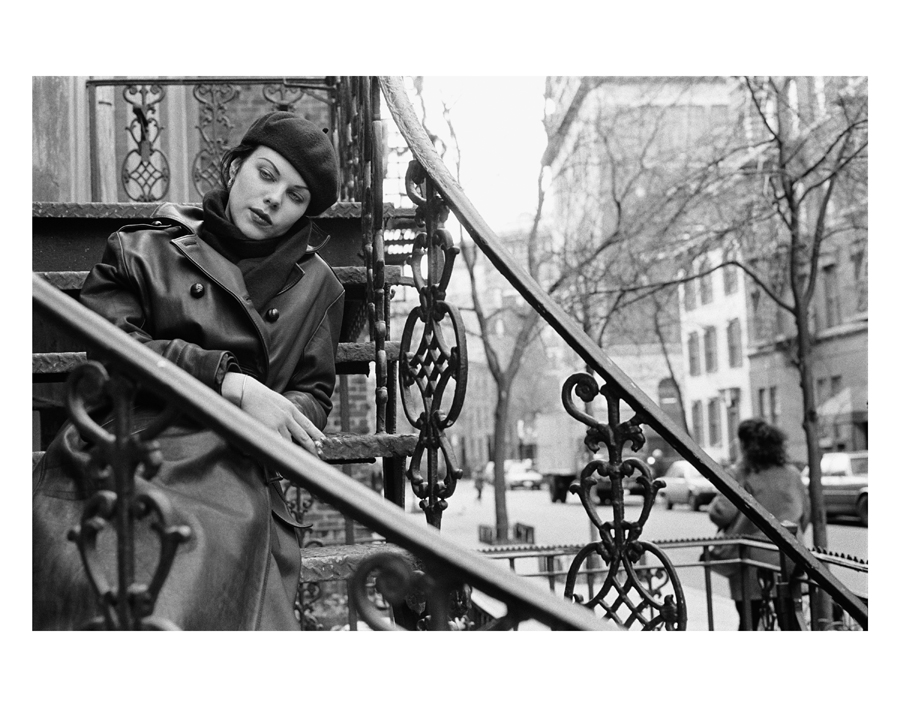 Q: Your masterfully composed portrait of Debi sitting on an ornate wrought iron staircase in an urban setting seems to capture the eternity in the moment. Her expression is serene and contemplative and her attire is casual yet fastidious, in keeping with her surroundings but somehow of a different order. Can you tell us the story behind this intriguing image, and what it means to you?
A: Debi and I have been close friends since I was 16 years old. We are connected and I’d shoot her often. That particular photograph was taken in the West Village, where we both lived. We were walking down the street and spontaneously I asked her to sit on the stairs. Debi is the best person to photograph; she can get into it at the drop of a dime. Plus she’s an avid photo collector; we’d spend hours talking about photography and looking at books. We have the same taste in imagery. She sat for about 10 minutes and then we kept it moving. This was very common for us. I can do a book on Debi alone! 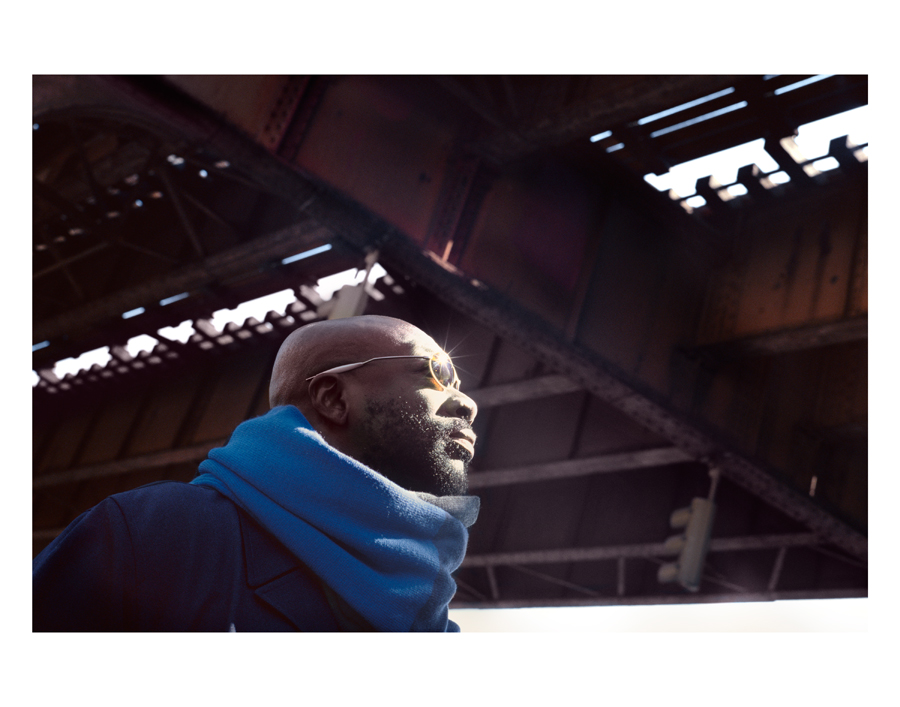 Q: Your compelling portrait of Isaac Hayes clad in a blue muffler underneath what looks like an elevated subway line conveys something of his intensity. There is no motion in the image, but he looks like a man on a mission, and the starburst of sunlight glinting off his glasses suggests the transcendent focus of a consummate artist. Were you aware of these elements as you took the picture, and can you tell us anything else about how you happened to create this memorable image?
A: I was shooting stills on his music video. We were in Brooklyn and there was some downtime. I love shooting trains, under the El. For me growing up, Isaac Hayes was always larger than life. I could see the light was right, so I asked him to stand by the El. He was very cool and easy to work with – he understood what I was trying to capture. That’s the beauty with working with certain artists … when it becomes a total collaboration. 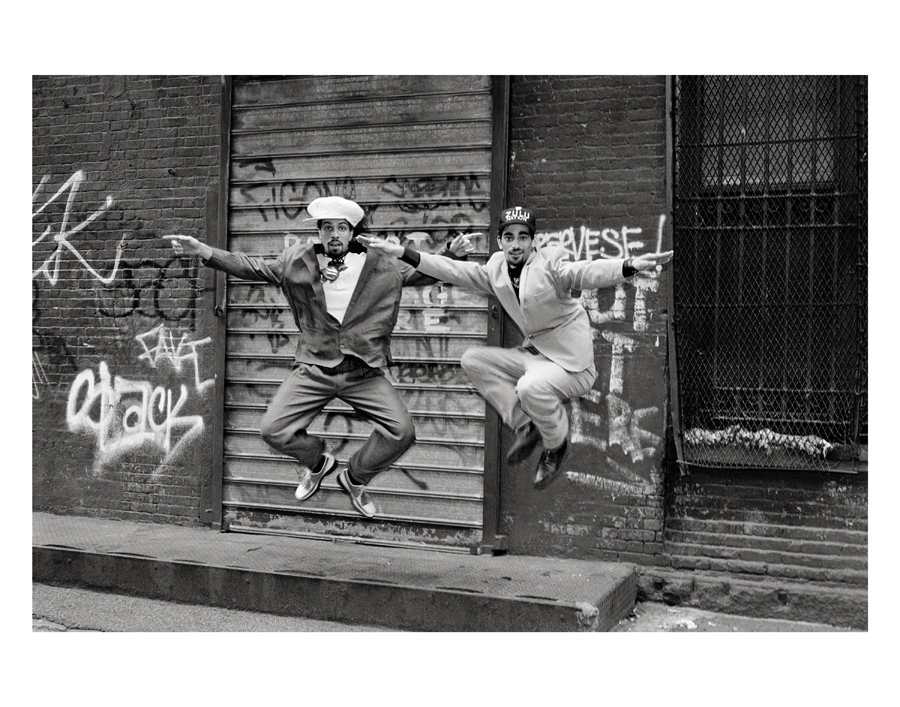 Q: This image is certainly engaging and evokes a smile — the two cool-looking dudes in hats frozen in mid-air seem to be having fun jumping for the camera, not to mention demonstrating considerable athletic prowess to get so far off the ground. Their hip attire and the seedy urban background with graffiti certainly give context to the image and create a cohesive statement. Who are these guys, and why did you decide to present them in this way?
A: I went to high school with Fabel and Wiggles. They were part of the first wave of hip-hop dancers to go touring and are quite famous for being pioneers of dance. I was, and still am, good friends with Fabel. They were starting to tour and needed photos. This is from one of our many outings. 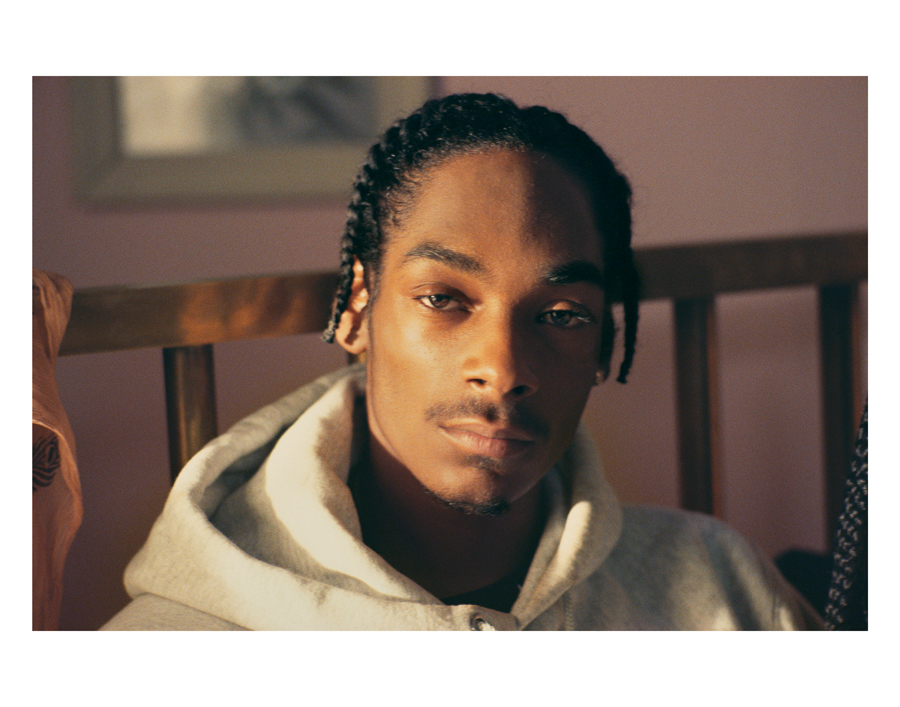 Q: The classic portrait of Snoop is very revealing and seems to capture several diverse elements of his personality or character — to me it conveys aspects of seriousness, self-awareness, introspective depth, and vulnerability beneath his outward assertiveness. What were you thinking when you pressed the shutter release?
A: You’re exactly right. I recently showed the photo to Snoop and he was blown away by the intimacy captured in the photograph. He was very shy back then; a lot of the images of him when he first started were very guarded. I met Snoop through Fab 5 Freddy and hung out awhile. I guess he got comfortable with me. I also think my Leica helped; it’s so small, quiet and unassuming. 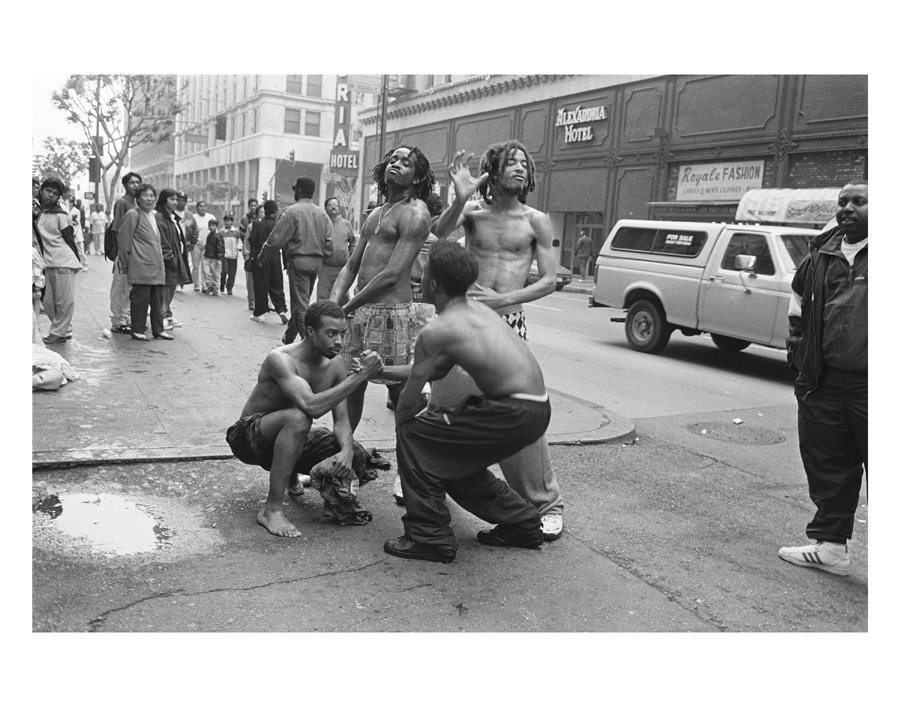 Q: Can you tell us the story behind this image you took of The Pharcyde?
A: This photo was taken on the set of the “Drop” video, directed by Spike Jonze. The group had to rap all their lyrics backward and then Spike reversed all the footage. It was a great video.
Q: Do you have any other projects in the works for the immediate future you can talk about, or any other plans to exhibit the images in this portfolio at other venues?
A: I’m hoping to do a traveling show with these images. There’s so much love for the golden age of hip-hop; the reaction to the photographs has been tremendous. I’m working on a series of images now, very different from these, but still capturing an intimacy and rawness. The new work explores the natural essence of women.
Q: How do you see your photography, in all its aspects, evolving over, say, the next three years, and do you plan to explore any other genres, subjects, or locations going forward?
A: I think I’ll always shoot people, but lately I’ve been interested in shooting in nature. I’ve also been experimenting with various types of papers and sizes. I see huge images that can move with the breeze, like being a part of nature itself.
Thank you for your time, Lisa!
– Leica Internet Team
Learn more about Lisa on her website.