Why choose one focal length over another? There are no hard and fast rules, especially when comparing focal lengths that are relatively close together. It’s easy to talk about the differences between broad categories of lenses, such as wide-angle versus telephoto. It’s not so easy to pin down the differences between a 24 mm and 28 mm lens, in part because the design of a lens can significantly alter the aesthetic quality of the resulting photos.
I would like to make a case for the 24 mm focal length — and more specifically, the Leica Elmar-M 24 mm f/3.8 ASPH. when paired with an M Monochrom camera. Among Leica’s current M-mount lenses, the 24 mm focal length might seem to be an odd duck, as it is tightly squeezed on both sides by the 21 mm and 28 mm lenses. I tend to think of a 28 mm lens as the safe choice in wide-angle lenses. You get much of the dramatic perspective that draws us to wide-angle lenses, yet it isn’t so extreme that it routinely distorts (in terms of perspective) people or familiar objects. A 21 mm lens, on the other hand, is more firmly into wraps-around-your-head territory. You have to be more careful (or perhaps, more thoughtful) in its use, though the payoff can be well worth it with the appropriate subject matter.
That places a 24 mm lens in the middle between the safe choice and the edge-of-extreme choice. You might call it a moderately extreme focal length. And that can make it an excellent pick for many two or three lens combinations. A 24 and 50 can be a terrific two lens kit. And if you want to throw in a telephoto, a 24, 35, and 75 can provide you with broad coverage without going too far at either end.
I had read that the 24 Elmar was an unusually sharp lens with excellent contrast and clarity. So when I had an opportunity to try that lens, I jumped at the chance. I can confirm that it’s consistently sharp with a very pleasing contrast and clarity. As much as I love my Summilux-M 24 mm f/1.4 ASPH. as a go-to all-round lens, I would prefer the 24 Elmar for outdoor coverage, as it is sharper and has less distortion than the Summilux. On the other hand, the Super-Elmar-M 21 mm f/3.4 ASPH. might be a better choice if you want a lens that has a more traditional analog feel, similar to the Summicron-M 28 mm f/2 ASPH. Almost identical in size to the 28 mm Summicron, the 24 Elmar is small and compact. It is 40.6 mm long and has a 53 mm diameter. By comparison, the 24 mm Summilux is 58.5 mm long and has a 61 mm diameter. The 24 Summilux weighs almost twice as much as the 24 Elmar.
In theory, you can use the 24 Elmar without an external viewfinder on an M9, M-E, or first-generation M Monochrom. The outer area beyond the 28 mm bright lines is close enough, so some photographers use the entire frame as a makeshift 24 mm view. I like to see the area that lies beyond the 24 mm frame lines, so I always use an external 24 mm viewfinder. Alternatively, you can use the innermost bright lines on Leica’s 18 mm external viewfinder. Those lines are there for the M8. Due to that camera’s smaller sensor, an 18 mm lens would have a focal view that approximates a 24 mm lens on a full-frame camera.
The 24 Elmar is an especially good choice if you have a preference for wide-angle lenses. Its increased depth of field can make everything sharp as a tack. With the M Monochrom, where the lack of a Bayer color filter gives you noise that’s more film-like at high ISO levels, you can increase the depth of field even more by bumping up the ISO and reducing the size of the aperture. And with this improved high-ISO performance, you can use the 24 Elmar handheld in situations that would have previously required a tripod. 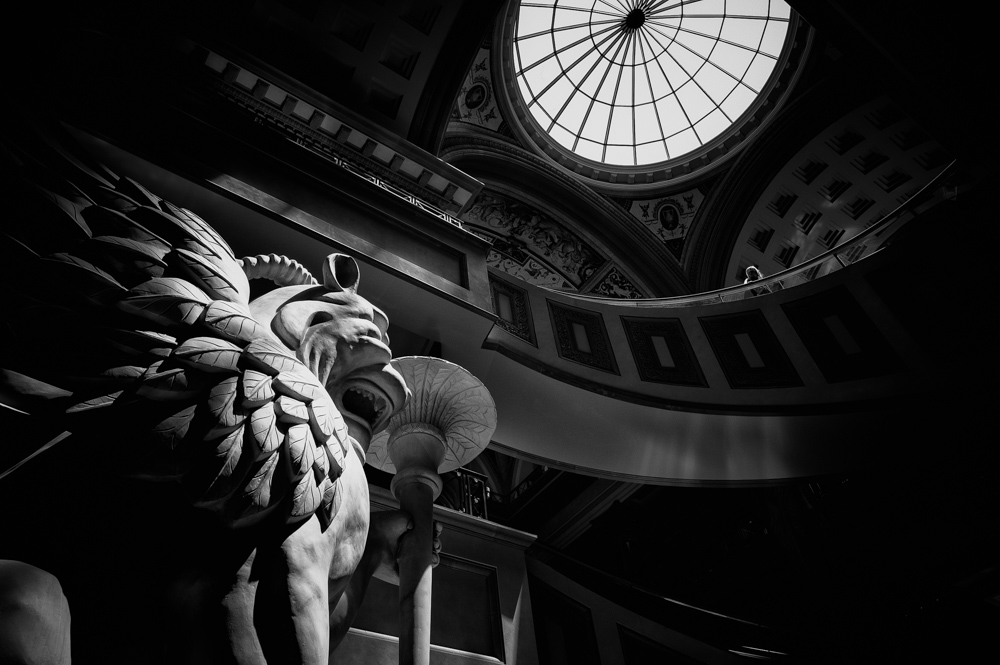 In the photo titled “Caesars Palace” you can see the sharpness and clarity that you can achieve with the 24 Elmar lens and Monochrom camera, even in challenging light conditions. The sharpness combined with a deep-focus depth of field can create a realistic background for your subject matter. Then when processing the image, you can nudge that realism wherever you want. Keep it real, or veer it into hyper-realism or surrealism. Tastes will differ, but having a solid foundation to work with can give you more flexibility on the processing side. You can see a higher-resolution version of this photo here at Leica Fotopark. 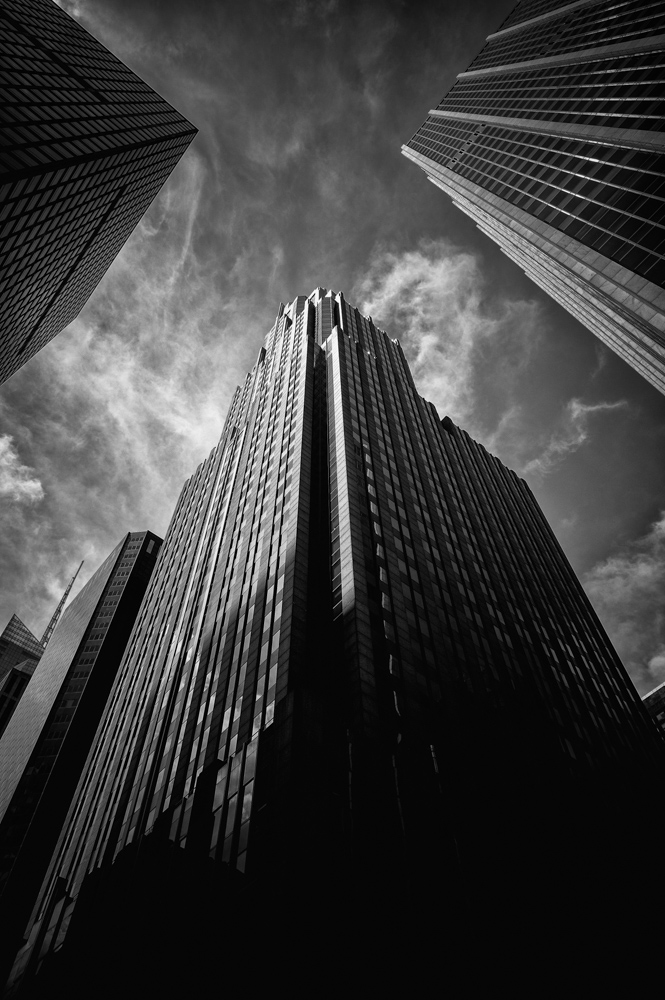 With the photo titled “Manhattan Buildings #6” the edge-to-edge sharpness and extreme depth of field help to make the image more dramatic and visually imposing. A 24 mm perspective will often include buildings from both sides of the street, giving the impression that the buildings are closing in on each other. Having the image sharply focused counteracts the feeling that we’re experiencing a perspective that can’t be real. Like a dream that seems more intense than our everyday lives, a finely detailed wide-angle perspective lets us view the world through a different set of eyes. A larger version of this photo is available here at Leica Fotopark. 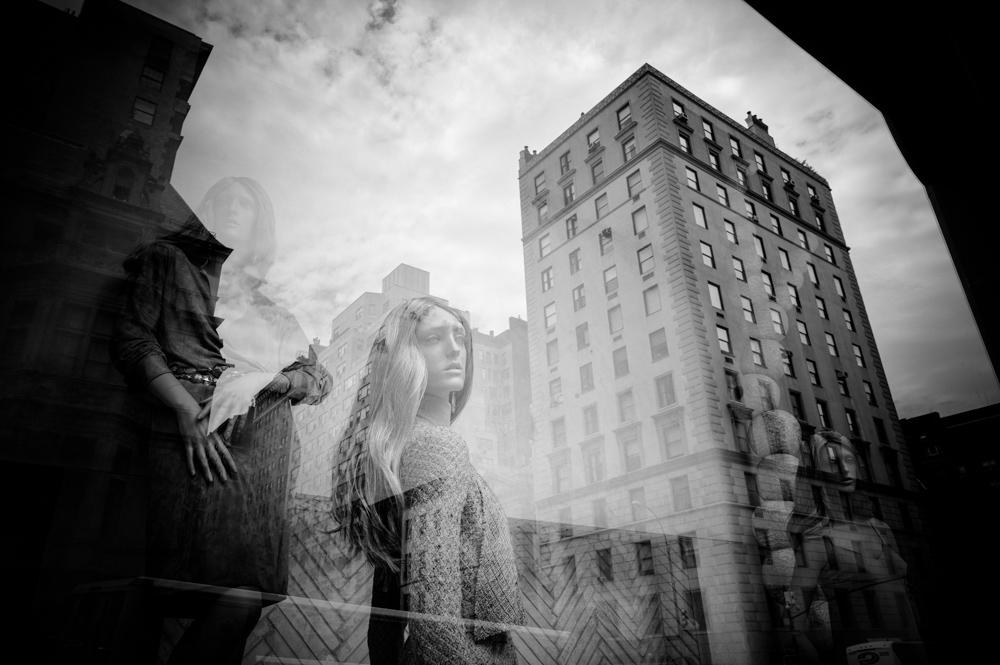 Often the challenge when processing these kinds of images is to bring out the sharpness and clarity without making the image uncomfortably harsh. Or put another way, how can you shoot with a digital sensor and still get the analog look that we associate with film? The photo titled “Manhattan Store Window #4” seems to straddle the fence between digital clarity and analog tonality. If the photo succeeds, it’s because the Monochrom and 24 Elmar are able to retain the resolution and subtle tones that are usually discarded with color-based digital cameras and less capable lenses. You can see a higher-resolution version of this photo here at Leica Fotopark. 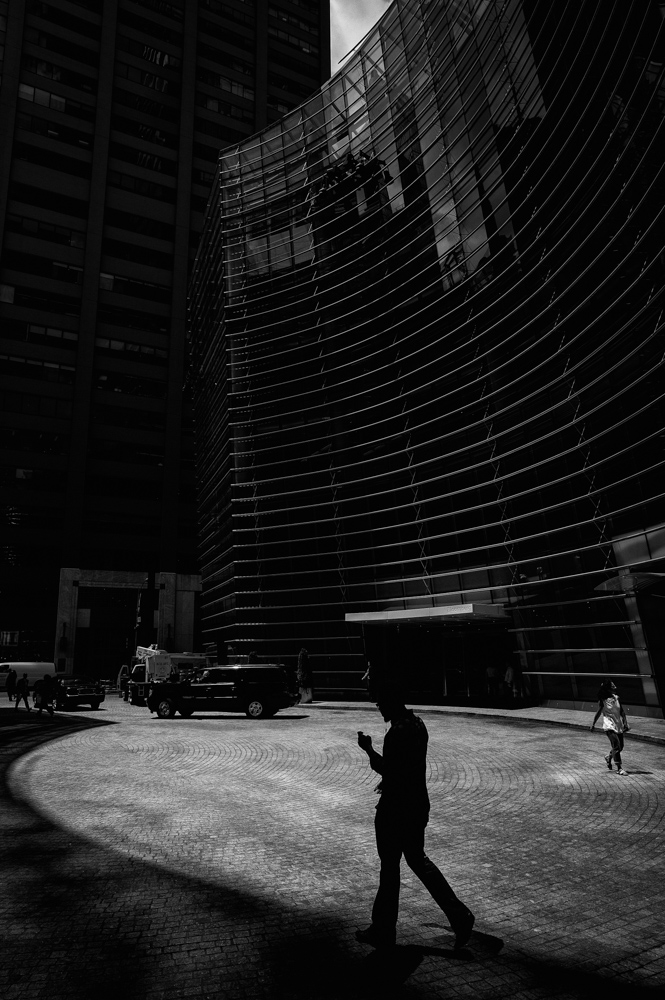 Some of the qualities that make a lens great can’t be easily measured. You won’t find them in the technical specs or MTF charts, because these qualities are elusive and somewhat subjective. How would you measure, for example, the ability of a lens to render objects so that they stand out from the background and from each other? It’s not just a matter of sharpness, detail, and contrast. I’m not sure what to call this quality, but a great lens gives heft to what it records. A two-dimensional photo becomes almost three-dimensional, because everything in it is captured and conveyed as separate and distinct. As you can see in the photo titled “Manhattan Shadows #4” the 24 Elmar has this kind of heft. The objects in the image seem to generate their own space, as though floating slightly above the background. You can get a better sense of this hovering quality with the larger version of the photo here at Leica Fotopark.
You could think of the 24 Elmar as a Goldilocks lens — not too hot, not too cold. It’s wide-angle, but not too wide-angle. It’s slow, but not too slow. It’s expensive, but not too expensive (relative to other Leica M-mount lenses). In this case, moderate isn’t the same as mediocre. The 24 Elmar produces sharp images with nicely rendered detail. The small size makes it easy to handle and less conspicuous for street shooting. And if you’re willing to use higher ISO settings (or push the results when processing), the maximum f/3.8 aperture shouldn’t be much of a hindrance.
– David English
This is a guest post by David English, who has a day job as a technology writer. He has written articles for CNET, Film & Video, PC Magazine, Sky, and other publications. David started shooting with a Leica camera in March 2009 using an M8.2. He is currently using an M Monochrom and X Vario. You can see his photos at protozoid.com. His main website is davidenglish.com, and his classic film blog is classicfilmpreview.com.