In 2014 Leica Camera AG had a triple celebration: 100 years of Leica photography, the Leica M 60-year jubilee, and the opening of new headquarters, which have brought Leica back to its origins in Wetzlar. In the entranceway to the new building, within the Experiential World of Leica area – where photo exhibitions, camera family trees and insight into the production of the legendary Leica brand come to life –, a fifteen metre-long time-line of the company’s history has now been completed. We spoke with Günter Osterloh, who, as custodian of the company archives, was responsible for the lengthy research involved, and with Frankfurt designer Klaus Mai, who took care of the graphic implementation. During his regular professional life, Osterloh was, among other things, in charge of Leica Product Management and also ran the Leica Akademie. 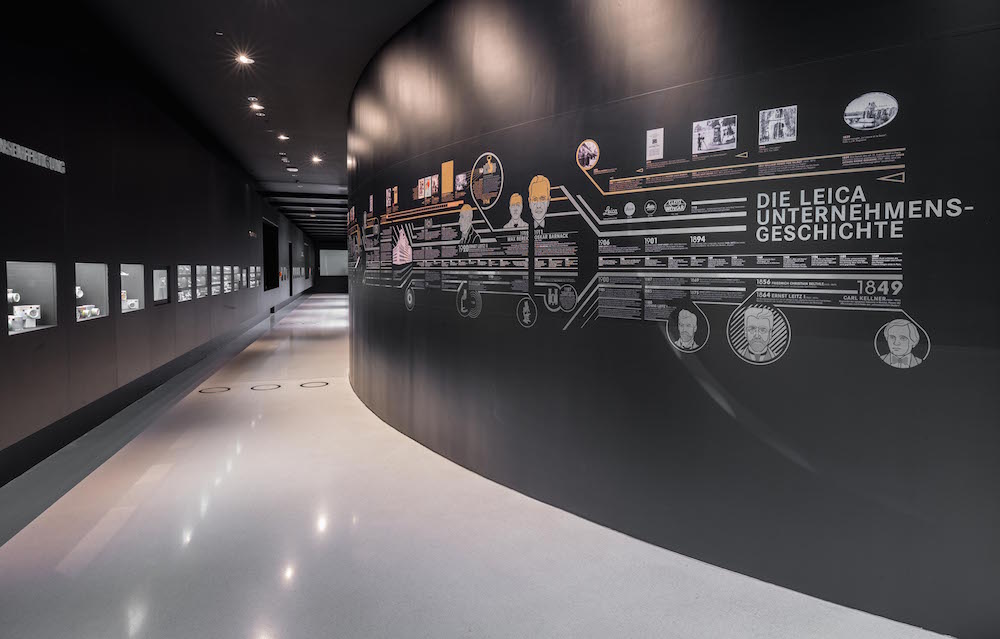 Q: The Leica Camera AG history time-line is the largest graphic information board that I’ve seen. How long did you work on it?
Günter Osterloh (GO): I can’t say how many hours exactly; but, in principle, since the autumn of 2013 till today. It began with a small draft that was accepted as the basis to start working. After that, I worked my way year by year through the company’s history – starting with the establishment of the Visual Institute by Carl Kellner in 1849 all the way to the Eyes Wide Open! 100 Years of Leica Photography! exhibition that opened in October 2014. As far as the history of photography is concerned, it even goes back ten years further, to August 1839 when daguerreotype was first introduced publicly. The time-line, as it has now been presented, includes about one third of the material researched.
Klaus Mai (KM): It was similar for me. It was a very complex project, particularly when it came to the coordination of graphic and content design. 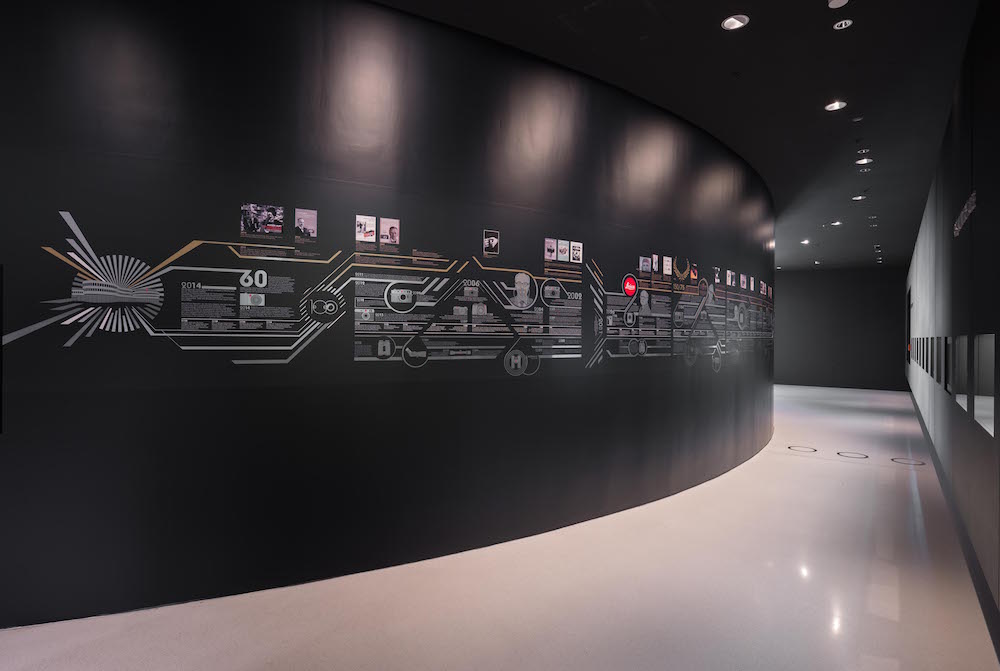 Q: What ideas played a role when it came to the graphic design?
KM: The time-line had to fit into the whole concept of the Experiential World of Leica. The company’s theme is its virtuous association with light and that needs to be reflected everywhere. It began with the building’s architecture, continued with the “lenses” concept in the outside area, and ended up inside with the milestone pillars set up in a circle, with rays of light that run from the window to the original Leica, and from there through the whole space.
The time-line is built horizontally, the lines run parallel, then subdivide with different colours radiating out into different areas. This symbolizes the companies radiance and how, thanks to its ground-breaking inventions and products, it has reached all areas of life.
Q: The different colored lines also mark the various levels in the time-line.
GO: Yes, in the upper level we have contemporary photography and, as of 1914, important publications in which Leica has played a defining role. The lines here are in gold. Lighter silver is the colour for cameras and lenses, one level lower, and dark silver is the colour for the area of sports optics and microscopy. Between the two silver levels, significant events of the day are documented in white. While we have followed a linear approach in each level, the individual levels are not completely synchronized. So, for example, an image of a 1949 publication may appear at the top and, below it, a person who played an important role in the company in 1956. This results in a loosening up of the large wealth of material.
KM: The illustrations of people, products and buildings are quite deliberately kept in one style, however. This way the time-line is modern, just like the company was at each stage along the way. 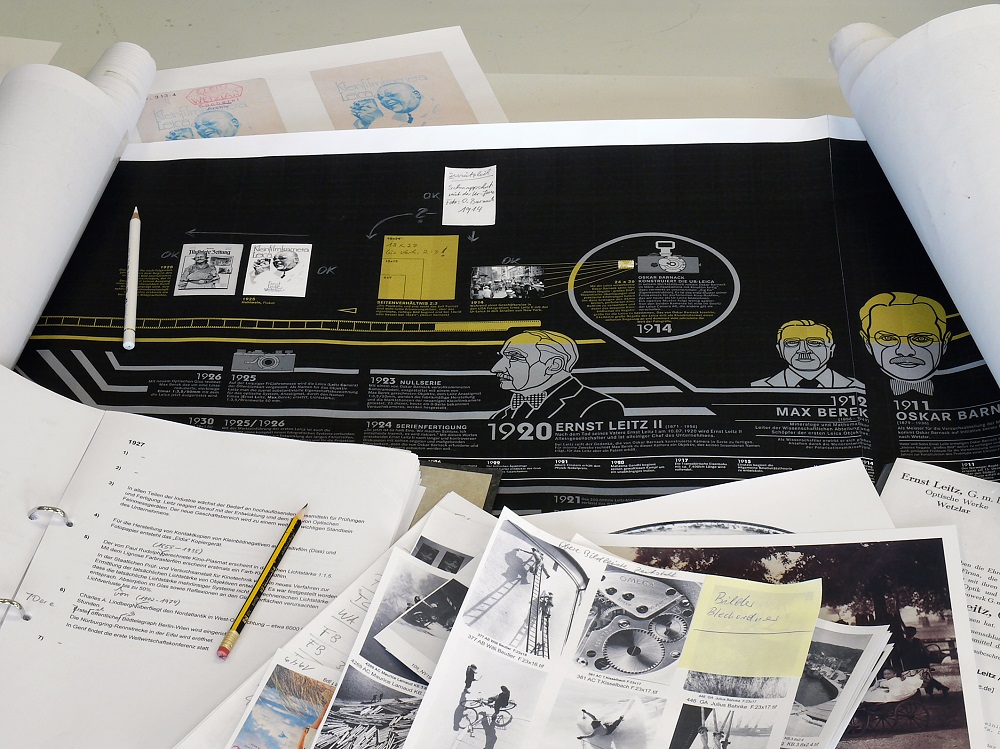 Q: What technological process did you use to print the time-line? I mean, it’s not exactly small.
KM There was a mixture of processes. It is printed like wall paper along the full seventeen-metre length, then we applied the foils in the various colours to that “wall paper”.
Q: How will you continue with the time-line? Luckily for us, the history of Leica Camera AG doesn’t end in 2014.
GO: No, the wall still has room for the next 100 years. In fact, the time-line was supposed to be finished in time for the opening of the new headquarters, but then other tasks had priority and the research took much more effort than expected. Looking back, however, this can be seen as quite fortunate: now we were able to include Hans-Michael Koetzle’s wonderful Eyes Wide Open! exhibition in the time-line – which I find is an excellent place for a provisional ending. Basically, we can sit down next year and do the work necessary to incorporate 2015; but maybe we should do it in longer steps, because it’s always useful to have a certain distance from an event before placing it within the overall scheme of things.
Thank you for your time, Günter and Klaus!
– Leica Internet Team
Read the interview in German here.