A look inside The Race of Gentlemen by Johannes Huwe

There are loud engine noises coming off what looks like a cast-iron bathtub on wheels. It’s a 1934 Ford Hot Rod heading towards the beach in Wildwood, New Jersey. Meanwhile, the rules of the race are being announced to the spectators and riders from a lifeguard tower. In order to participate in “The Race of Gentlemen” (aka TROG), many have come from far and wide, bringing their pre-1935 American cars. These vintage cars are also restricted to replacement or add-on parts from the early 1950s at the latest. Meanwhile, the motorcycles all date from before 1947. 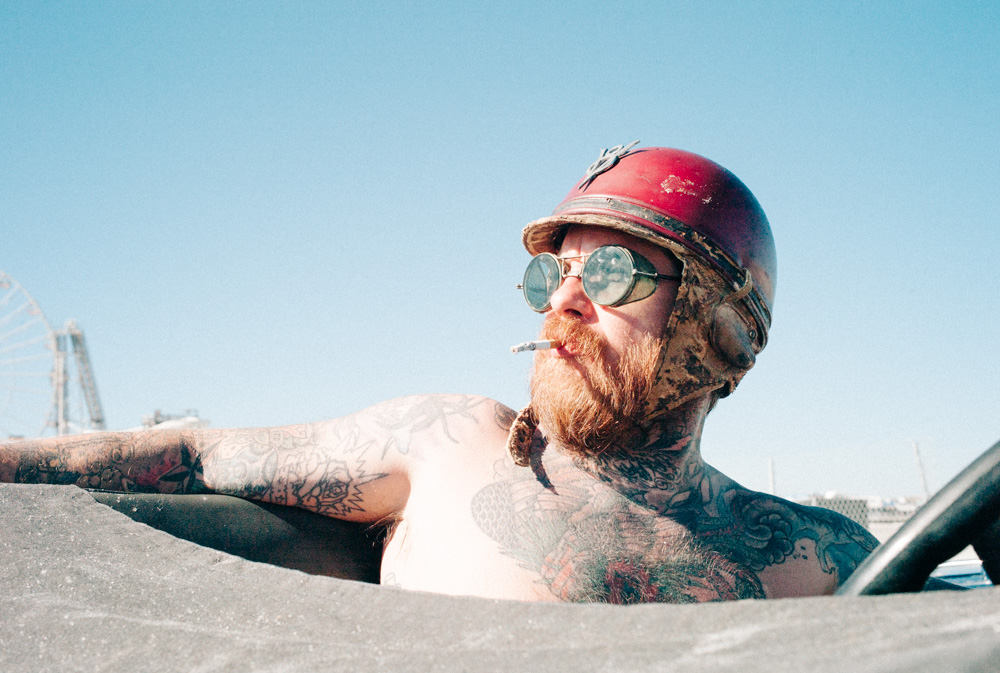 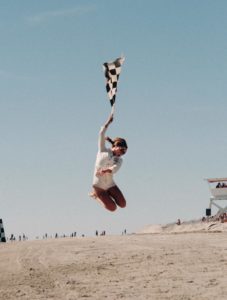 As the hot rods line up at the starting line side-by-side in pairs along the wide sandy beach, all eyes are on the flag girl, a barefooted woman with blonde hair wearing white Harley-Davidson service overalls, albeit now cut short-short. She’s got the checkered flag in her hand, ready to signal the start of the race. The engines roar and the tension on the beach rises. Then the flag girl jumps a good two feet into the air and lowers the flag. 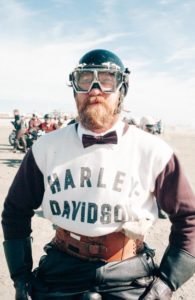 The sand flies as the gentlemen floor the gas pedals in their vintage sportsters. A lot of gas, but not too much, because otherwise the tires will just dig a hole for themselves in the sand and they won’t move.

But the weather at the 2015 race was not so cooperative: Hurricane Joaquin postponed the start date and made the racing conditions even tougher. Storm damage to some of the vehicles was not fixed until just before the start of the race, which had been postponed a week by the hurricane. 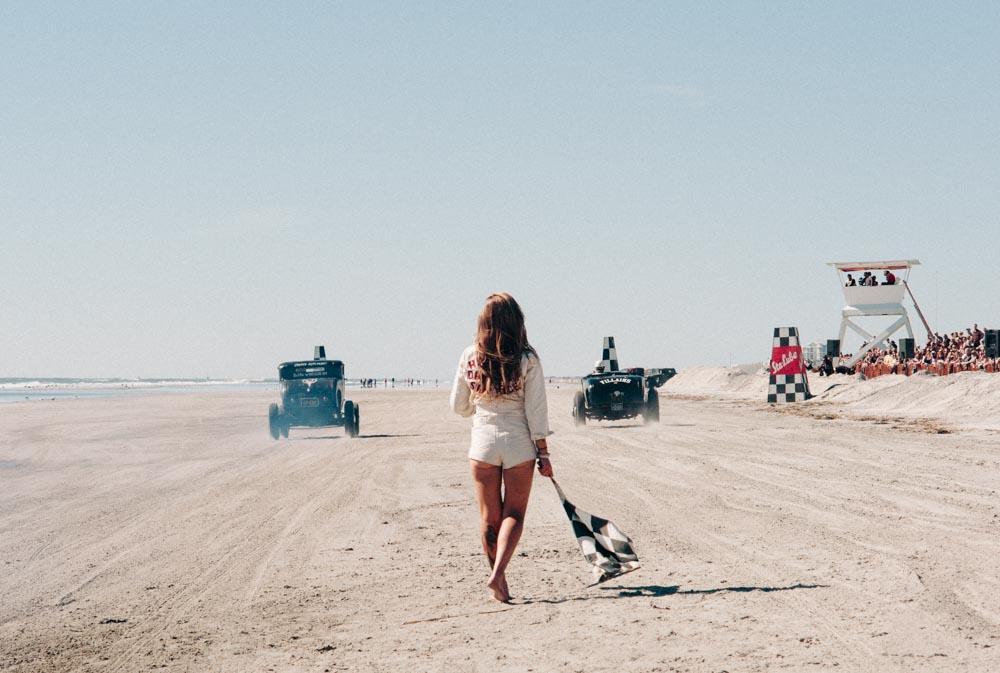 Despite keeping their racing cars in the best shape possible, the drivers still have to reckon with everything in this 1/8 mile sprint on the Atlantic shore. Jessie Combs, the world’s fastest woman, for example, found that her steering wheel had come loose from the dash in one race! Somehow, she skillfully navigated her vehicle to the finish line, but no longer anywhere near the 435 mph with which she had broken the forty-eight-year-old land speed record in October 2013.

On top of the thrill of the race, the beach atmosphere provides plenty of fun just grilling and chilling. Back in the 1940s and 50s, hot-rodders had already started coming together on the beaches of the east and west coasts of the United States to compete against each other in sprints like the TROG. The 2015 event at Wildwood was organized for the fourth time by the Oilers Car Club, one of the co-founders of National Hot Rod Association (NHRA) back in 1949 and organizer of some of the first hot rod competitions ever. It’s no wonder that it’s the organization bringing back this spectacle for today’s audiences. 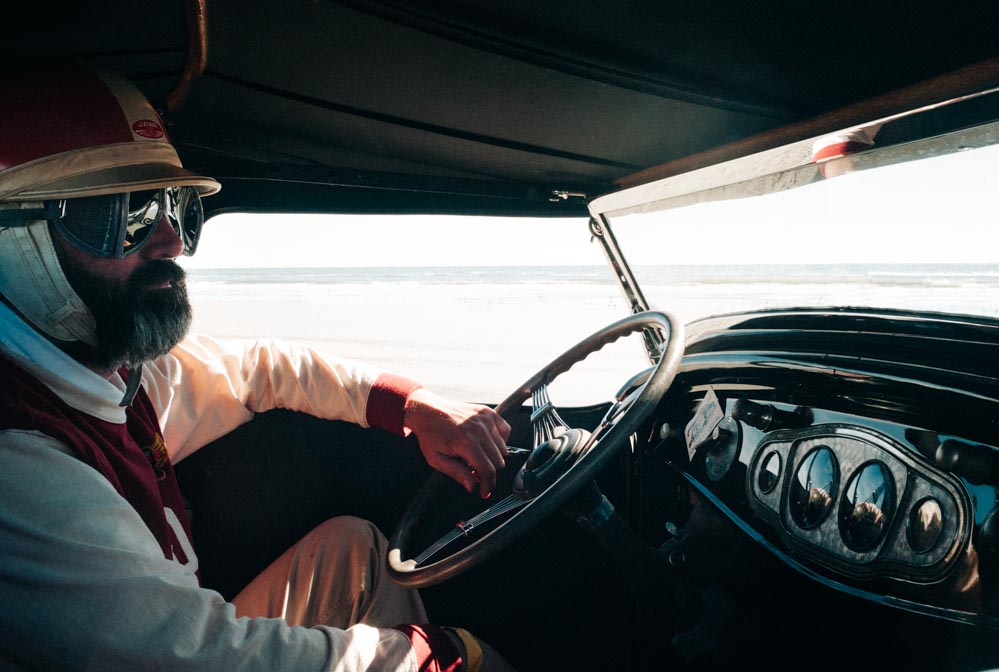 Interested in photography since the mid-1980s, Johannes Huwe’s recent work has focused on documentary and landscape photography. In addition to numerous exhibitions, Huwe’s work has appeared in Lifestyle and Automagazine like the Автопилот (Autopilot) magazine from Moscow. For his documentary work, Huwe travels around the globe to remote spots including the Atacama desert in Chile, Greenland to craft a portrait of the indigenous Inuit people or a several week-long expedition to Antarctica.

Always with his Leica M camera on hand, Johannes Huwe still prefers analog photography for his work, but happened to have not only his Leica MP but also a Leica M8 along when he took the shots for this series. 95% were taken with an Elmarit 28 lens (equivalent to 35 mm on the Leica M8); the others were taken with a Summarit 90.

The picture book “The Race of Gentlemen” will be available from mid December as a limited, handsigned Edition. Price is 49,00 Euro. (48 pages, Hardcover, 44 color photographs, text english and german). Order now: http://johanneshuwe.com/shop/.