The book was first published in 1952 by Verve in Paris and later the same year by Simon & Schuster in New York. The idea of a decisive moment in street photography is often misunderstood as many read it as a request for something that relates only to the content of a photograph. For Henri Cartier – Bresson that was indeed not the case as he again and again stressed that a decisive moment also requires  consideration on form.

Henri Cartier – Bresson says in the introduction to the book: “To me, photography is the simultaneous recognition, in a fraction of a second, of the significance of an event as well as of a precise organization of forms which give that event its proper expression.” When the shoe of the jumping man in Cartier – Bresson’s famous picture, Behind Gare Saint-Lazare (Paris 1932) nearly hits the water that is not the decisive moment. The whole frame is.

The decisive moment is never a single disconnected detail in a photograph. It is always the whole photograph. In addition to Cartier – Bresson’s decisive moment New Street Agenda works with a second decisive moment. No less important than the first one. The second moment, is the idea that every photograph not only is a moment in chronological time but that the moment also is an instance in the stream of consciousness of the individual.

In a historical context this represent a break with the classical understanding of perception. It was first described by the German philosopher Edmund Husserl (1859 – 1938), recognized as the father of phenomenology. It links to the stream of consciousness when a photograph meets a human being and opens up for the specter of knowledge, experience and ambition of that human being. It brings reflections of the past, occupies the moment and anticipates the future in the recreation of the scene made available by the photographer.

These new moments does not need to be decisive but as is the case of  Cartier – Bresson’s moments, they can be. To make a long story short you could say that Cartier – Bresson’s decisive moment deals with the internal structure of a photograph while Husserl’s moment deals with the external structure of a photograph. The distinction can, it should be added, only be made in theory because in real life the two moments will always work together. There is no photograph unless it is perceived.

Is this distinction of any use for people, who are primarily interesting in taking and showing photographs as a hobby? Maybe publish them among friends on Facebook or on Instagram and wait for likes and one-worded comments? Or is the distinction only of interest for folks with (also) a more academic approach to photography? In my opinion photography is not only a matter of showing. It is also a matter of knowing. This goes particularly for street photography where events often are complex and open for interpretations. 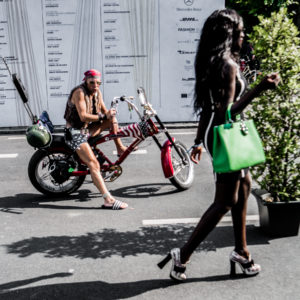 Let’s have an example: Take the featured photograph that accompanies this article: Something in the Air, shot in Berlin in 2013.

Question: How does this photograph relate to Cartier – Bresson’s decisive moment? And how does it relate to Husserl’s moment?

The answers could read like this: Cartier Bresson’s decisive moment is the event itself neatly arranged by the photographer for his lens by the position of the two people within the frame.  And indeed their visual relation to each other. This is the internal structure of the picture. It mainly deals with the event and its handling by the photographer.

Husserl’s moment could be the gender attraction and the sexual connotations of the shot. This is the external structure of the picture. It is based on the knowledge, the experience, the ambitions and the motives projected on to the photograph, by the viewer. I am aware that I could use more words on the relationship between the two moments of street photography, and indeed photography in general, but in this case it will has to do. I hear voices: We as photographers already sense what you say here from viewing photographs. Why spell it out? Is it necessary for photographers in general, and street photographers in particular, to know these things other than by perhaps instinct?
Answer: No, it is not if you subscribe to the idea that photography is only a matter of showing and not a matter of knowing. Either way, I am convinced that they route you take is easily visible in your photographs.

Good luck on the streets.

© Knut Skjærven. All rights reserved.
The Decisive Moment, and the French original, Images a la Sauvette, were republished by German publisher Steidl in 2014. Both books are a pleasure to have, to read and to study.

Knut Skjærven is a Norwegian photographer, blogger and researcher in visual communication working out of Copenhagen Denmark. He started doing street photography in 2010. He runs numerous sites on street photography. In 2015 Knut was nominated for the prestigious HCB Award by Council of Europe, Strasbourg.