After shooting with a Leica Q for a year, I’ve found that I’m using it differently than when I first began shooting with it. I carry a Leica Q and Leica M Monochrom with me almost everywhere I go, so part of the shift has been figuring out which camera would be best in a particular situation.

Compared with the Monochrom, the Q is more compact. It captures color that’s both realistic and painterly (not an easy combination for a digital camera). Its macro mode is easily accessed and intuitive. And most surprising, I’ve come to rely on its fast automatic modes. As a result, I reach for the Q when I think that color would be a key component of the shot, when I need to focus closer than an M-mount lens would allow, or when I need to shoot quickly, especially in low light.

My previous default setting for the Q was for manual focus. When necessary, I would change it to autofocus. Immediately following that shot, I would switch it back to manual. Now I do the opposite. The default is autofocus with the occasional switch to manual. I’ve also moved from manual exposure to auto-exposure (mostly using the Shutter Speed Priority setting). That was surprising, because shooting manual on a Leica M8 helped me understand the tradeoffs with aperture, shutter speed, and ISO values. So why give up that manual control if you want the best shot?

You don’t have to give it up completely with the Q. You can set the function button on the back of the camera for exposure compensation. Then when the auto-exposure seems off, you can press the FN button and adjust that setting six full stops (from -3 to +3). Combining auto-exposure with a manual override is the best of both worlds. This is practical only because the Q’s autofocus and auto-exposure modes are unusually fast. Otherwise, you might as well shoot manual all the time.

The autofocus was a harder sell for me, as I had no reason to think that it would be more accurate. It isn’t more accurate, but it is faster than focusing manually. The Q has six autofocus modes, including a one-point option and a multi-point option. I had assumed that I would prefer the one-point over the multi-point. However, the visual array of active focus points is useful for thinking about the scene in three dimensions. Since the focus system is looking for objects that are the same distance from the lens, the illuminated points function as a kind of sonar map. And by softly pressing the shutter release button repeatedly, you can re-slice the scene to shift the three-dimensional map. This instant feedback helps you conceptualize the relative positions of objects in the image. 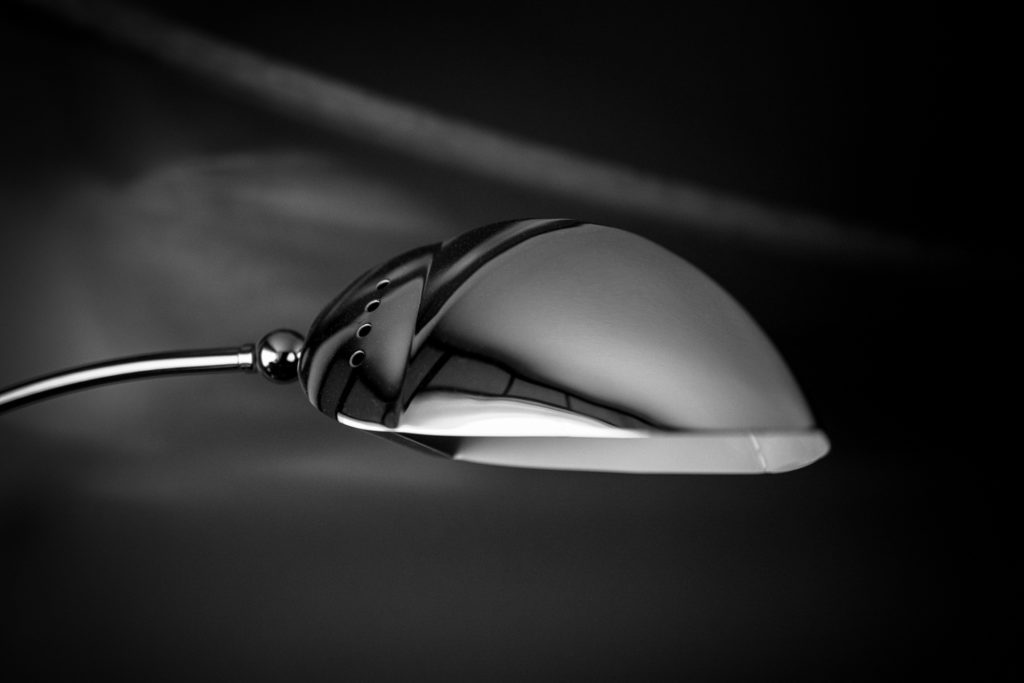 Sometimes an amazing photographic subject is right in front of you. In fact, it may be just millimeters in front of your face. The trick is to look at everything around you as a potential photograph. Unfortunately, most of the M-mount lenses focus only as close as 0.7 meters. The Q’s lens, on the other hand, can focus as close as 0.3 meters without having to switch to the camera’s macro mode. With the macro mode engaged, you can go even closer—to just 0.17 meters. That’s 6.7 inches. The photo titled Desk Lamp was shot in a hotel room in Las Vegas. I was sitting at the desk, when I realized that the lamp in front of me (and the shadows behind it) would make a nice photo. 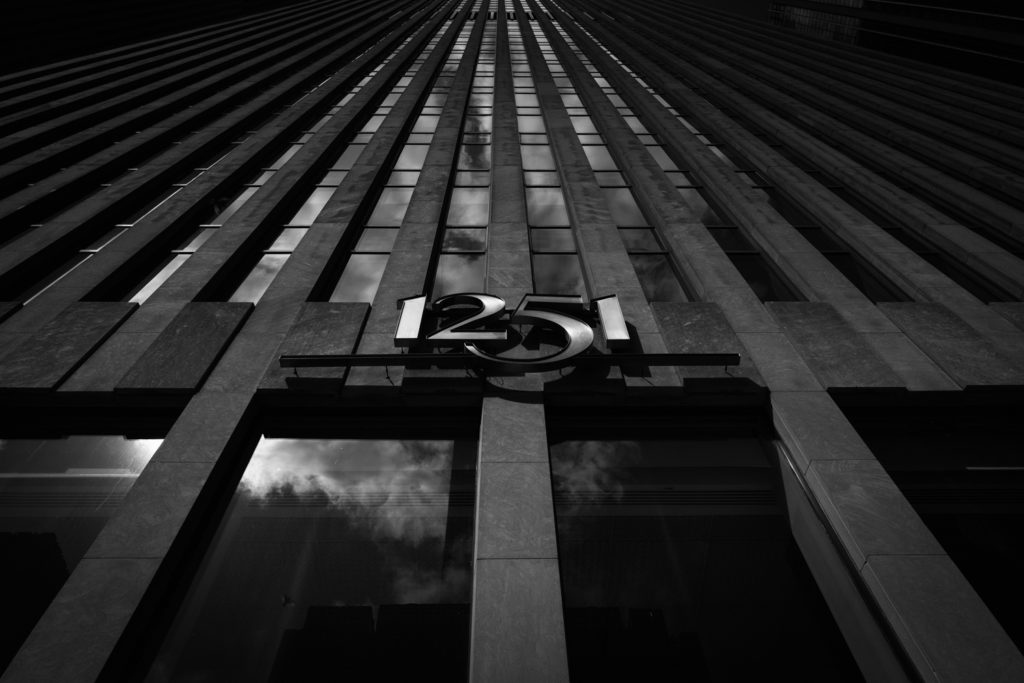 The Q’s built-in 28mm Summilux lens is comparable in quality to many of Leica’s M-mount lenses. The photo titled Manhattan Buildings #26 has the kind of sharpness and clarity that we’ve come to expect with high-end Leica glass. Not having a color-separating Bayer filter does give the Monochrom an advantage for film-like rendering. However, the Q’s compact size and fast auto features make it an equally fine choice for street photography. For this particular type of image, where the reflected light and clouds were constantly shifting, having high-speed auto-exposure can mean the difference between getting the shot you first saw, or settling for something that’s almost what had caught your attention. 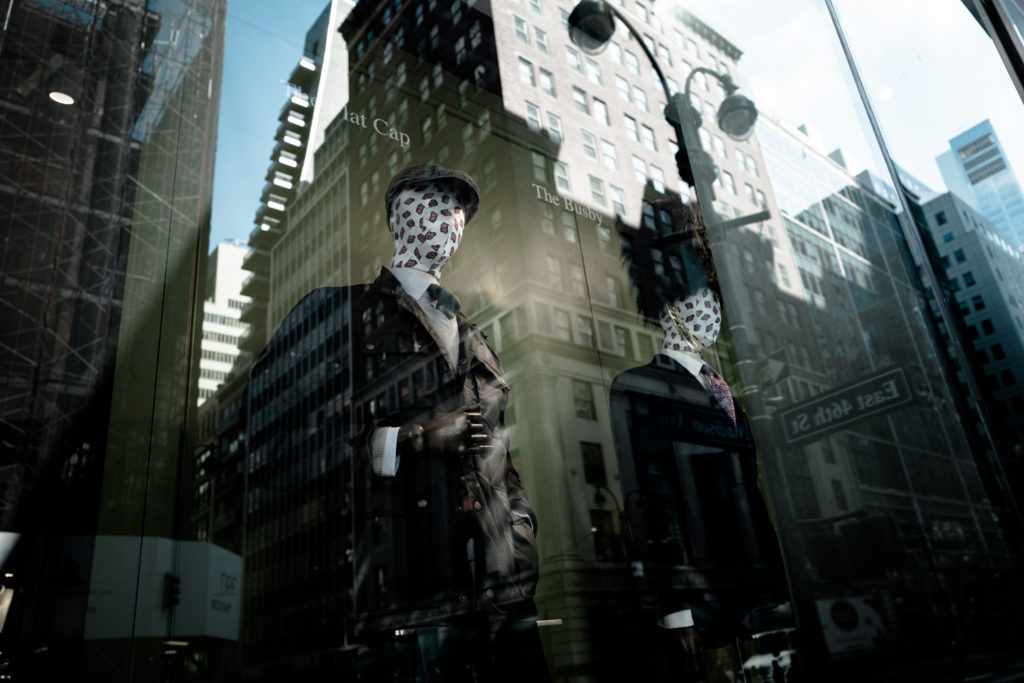 I’ve also altered my approach to color versus black-and-white when using the Q. Previously I would process the image first for color. If the color didn’t add anything, I would process it again for monochrome. Now the steps are reversed. I process the image first for black-and-white. If that doesn’t work, I bring up the saturation to see if color might enhance the subject. It may seem counterintuitive, but I end up with more top-notch color images this way. That’s probably because I’m adding color only when needed, as opposed to removing it only after it has failed.

For the photo titled Manhattan Store Window #22, the mannequins didn’t stand out when the image was processed for black-and-white. The grays from the background were too similar to the grays from the mannequins, which created a muddle. By bringing up the saturation on the already processed black-and-white image, I could see the exact saturation point where the colors help to define the various tones and forms, as opposed to distracting from those elements, as color can sometimes do. 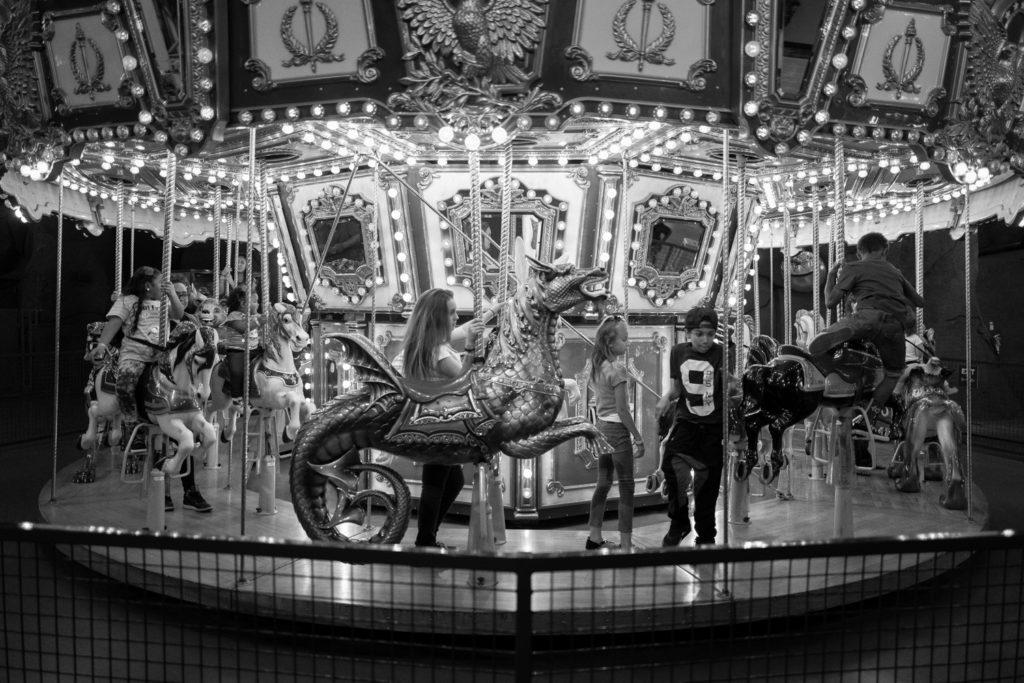 I often have a slower wide-angle lens mounted on my Monochrom. Current favorites include the 18mm Super-Elmar-M (f/3.8), 21mm Super-Elmar-M (f/3.4), and 24mm Elmar-M (f/3.8). In a low-light situation, especially when there’s movement that requires a relatively fast shutter speed, it’s good to have a second camera with a Summilux lens. In the photo titled Merry-Go-Round, a fast lens was needed because the merry-go-round was moving at the time. The Q was able to freeze the action at 1/250 of a second while delivering a sharp, high-contrast image.

Even after a year, I’m still learning my way around the Leica Q. Given their combined size and weight, I’m happy to carry the Q and Monochrom nestled side-by-side in a small camera bag. Like two siblings who begin to form their personalities in relationship to each other, I’m slowly getting a feel for how these cameras can coexist and adapt to each other’s strengths and limitations.

This is a guest post by David English, who has a day job as a technology writer. He has written articles for CNET, Film & Video, PC Magazine, Sky, and other publications. David started shooting with a Leica camera in March 2009 using an M8.2. He is currently using an M Monochrom, X Vario, and Q. You can see his photos at protozoid.com. His main website is davidenglish.com, and his classic film blog is classicfilmpreview.com.