A journey to Glasgow, Scotland

As photographed by Colin Templeton

Colin Templeton is a Glasgow-based, award-winning photographer with 22 years’ experience in news, features, PR, and sport. His work has appeared across the board, including The Guardian, The Times, The Sunday Times, The Independent, The Sun, Daily Express, The Mirror, Sunday Mirror, Daily Mail, Mail on Sunday, Daily Record, Sunday Mail, The Scotsman, Scotland on Sunday, HELLO! magazine, Black + White Photography magazine and Leica Fotografie International magazine. Formerly a staff photographer with national titles The Herald/Sunday Herald/The National/Evening Times, now freelancing in central Scotland, and beyond.

You are an avid Glasgow photographer, after working for the press after a number of years what have you found to be the most unique aspect about Glasgow?

The friendliness and good humour of the Glaswegians. You only need to spend a short time in the city to notice it.

For this selection of images, what camera did you use?

They are shot either on an M Monochrom MK1, the M9 I owned before that, or on an M2 or M5.

What was the curation process like? Meaning, can you share a story or two behind the images you’ve shared?

I’ve been carrying an M around the town, everywhere I go, for five years now, and I’ve built up quite a number of images to sift through. I try to select only the shots which strike a chord with me. One of my favourites is the lads playing in the burst water main. I had been driving around the east end of Glasgow, trying to find a way of photographing a particular motorway sign for the newspaper. I could see the sign from the motorway, but had to get off, and into the back streets under the flyover to find a vantage point. That was when I stumbled upon that scene, a scene which has been going on for as long as there have been fire hydrants, hot weather, and people. They were happy to be photographed, but I thought the moment might still soon be gone. I shot three frames, and this was the only one that really worked. 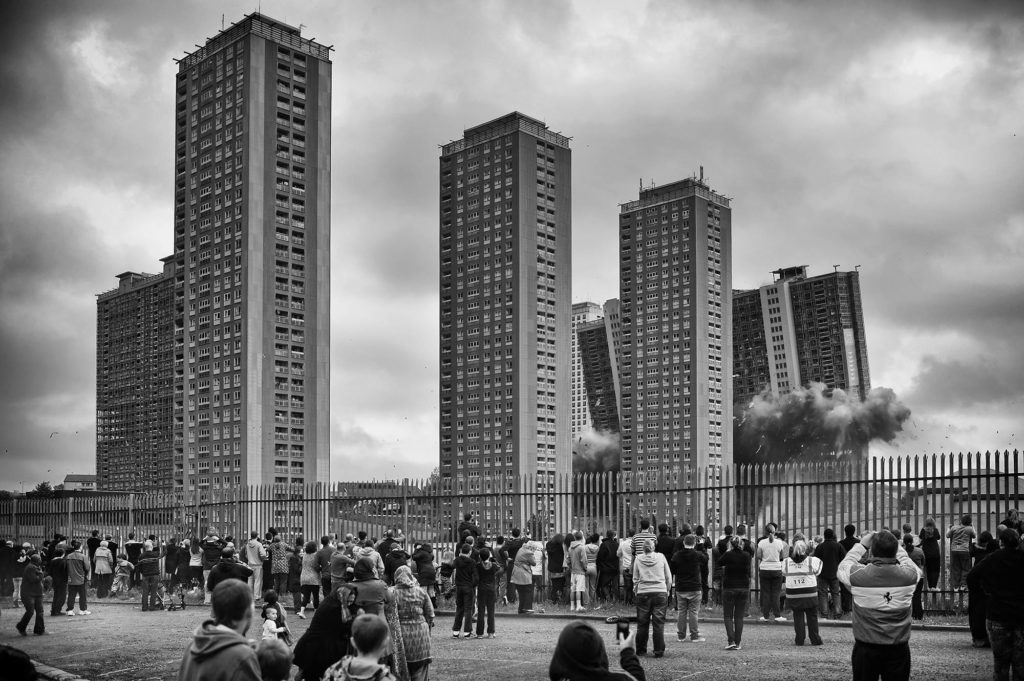 The image on the left has a peculiar, almost apocalyptic sky, specially because of the ambience encouraged by the collapsing building – what was happening here?

This was the demolition of Glasgow’s infamous Red Road flats. The towers were built in the 1960’s, in a spirit of great optimism – at the time they were the tallest flats in Europe. But over the years they gained notoriety as a place where there was a disproportionate amount of crime. It got harder to find anyone who actually wanted to live there. A good crowd, many of whom were former residents, turned up for the dynamiting of the first block. 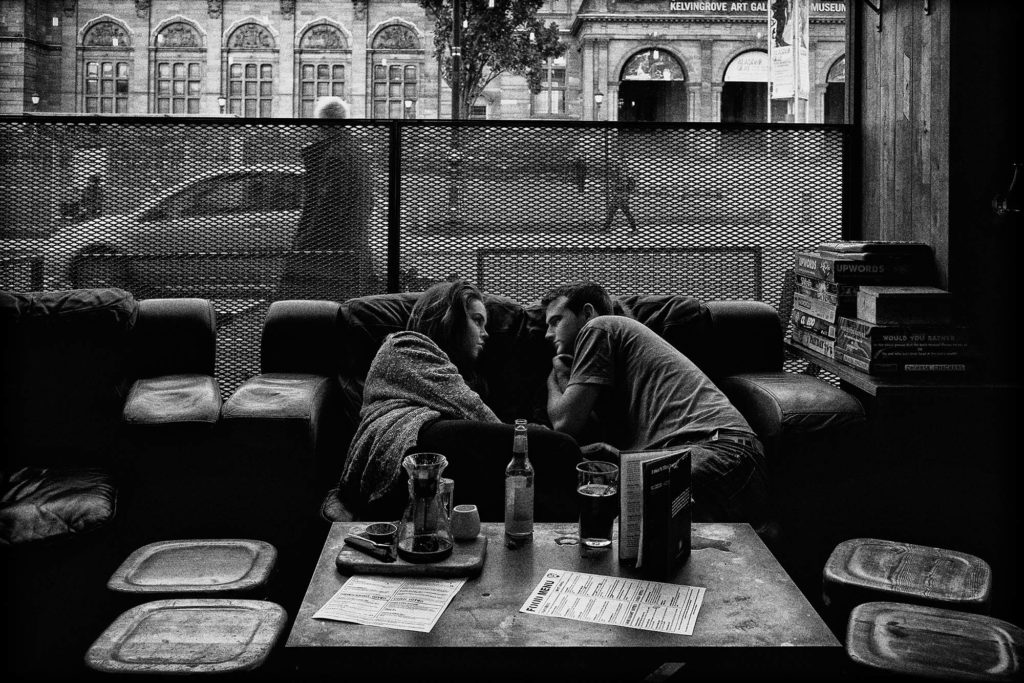 There’s a beautiful image of a couple sitting on a couch and staring at each other (CT_009), what are your thoughts on this image?

I shot this in a pub in the Yorkhill district of Glasgow. I noticed this couple who were utterly transfixed, oblivious to absolutely everything around them. Like time had stood still. It was such a beautiful moment, I simply couldn’t not take the picture. 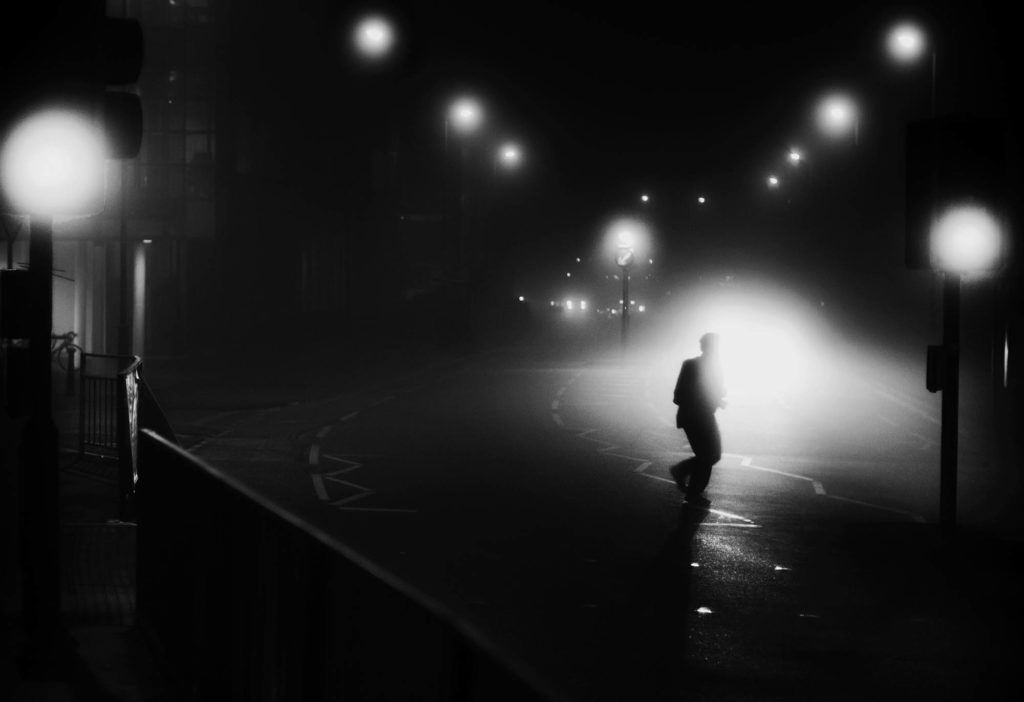 The image above has a beautiful play on light, with the bokeh of the light bulbs and the strong contrast of blacks. Did you use any specific technique or process here?

Thank you. I was out with my camera that night, specifically because there was a thick fog over the city, and that doesn’t happen very often in Glasgow. At the time I still had a 1978 copy of the wonderful F1 Noctilux lens, and it was the M9 I was shooting. I never liked going too high with the ISO on the M9, so the Noctilux was a great help at nights. I set it to F1 in this instance and waited near a pedestrian crossing for something to happen. I liked the way the streetlights receded into the fog, but it just needed an extra something.

As immersed as you are in the day-to-day activities of Glasglow life, how do you perceive Glasgow photography? Is there a specific trend, or inclination towards doing street photography?

The one thing I’ve noticed is that even just in the last two or three years, street photography is becoming very popular everywhere, including in Glasgow. I see this particularly on Instagram. Instagram is less about photography than it used to be, but it can still a great barometer of what is going on, and there are some remarkable photographers who put their work on there. I can’t decide if the street photography thing is a trend, or if it’s something which will have some longevity.

I think anyone who goes out into the streets with a camera to document what’s around them is trying to preserve something of their world. Everything disappears and becomes fascinating once it has gone. I like getting cars into my pictures. There are people not yet born who will find it astonishing that anybody was ever allowed to drive their own car along a busy street.

For the time being, I’m working towards my first photo book.