Breathtaking shots from up in the air

Aerial Australia by Nick Rains and the Leica SL

The Leica camera Blog Made with Leica SL

Nick Rains has been a full-time professional photographer since 1985 when he left the United Kingdom in search of adventure. He ended up in Australia, where is currently based, and has worked in commercial, landscape and travel photography. Since 1997 he has written and photographed 13 books. He has worked as a contributing photographer for Australian Geographic magazine and served as editor of Better Digital Camera magazine. In 2013 Nick was appointed Principal Instructor for the Leica Akademie in Australia. Below, he shows breathtaking aerial images of Australia (his 14th book).

Please share the background of the project, how did it come to fruition and what were its objectives?

This book aerial photography is actually the fifth one of a series of books I’ve done covering Australia. The first four were tTropical Australia, Desert Australia, Coastal Australia and Country Australia. The publisher decided that we should do one called Aerial Australia just to show a different perspective. Because I had quite a lot of images already from previous jobs shot over many years, I had enough material to get me going but I also had to shoot a lot of fresh material – particularly of the cities because they change quite rapidly.

Australia is known for a wide array of natural landscapes and wildlife, yet you documented a bit of everything, from architecture to soccer fields and water.

Yes, Australia is known for its natural landscapes but of course there’s a lot more to Australia than just scenery. Most of the population lives on the coast and in urban centres so it was natural to include the cities and what we’ve called the ‘working heartland’ which are places like farms and industrial areas and vineyards, wheat fields and so on. Not only that, but as a photographer I’m always looking for striking images, anything graphic, anything from a different point of view that is not quite what you’d expect. I think the main aim of the book is to show how different Australia looks from a high vantage point. Everything looks different from above and we wanted to really concentrate on this to try and avoid the sorts of images that people had seen before and create completely new ones.

You’ve previously shot with the Leica S and the Leica T, clearly, they stand for different objectives. How is the SL’s performance for these types of projects?

I have photographed quite a lot with the Leica S and the Leica T as well as the M system. I have now almost exclusively moved to shooting with the SL because of its versatility. It might not have the massive resolution of the S system but the autofocus, the weight, the handling and all of the other features suit what I do perfectly. As an aerial camera it’s amazing, the lens has an excellent stabiliser within, the autofocus is effortless and the whole package is quite easy to work with inside the cramped space of a small plane.

You used two lenses mainly, correct? Can you describe the versatility of each of the lenses?

For most of the aerial work I use the two SL zoom lenses – the 24 – 90 and the 90 – 280. There is little point in shooting with anything wider because you tend to get the wing of the aeroplane in the frame, and the 90 to 280 allows me to get really tight in on subjects without having to fly too low. Between them they covered everything I needed and having only two lenses to worry about just makes life easier. 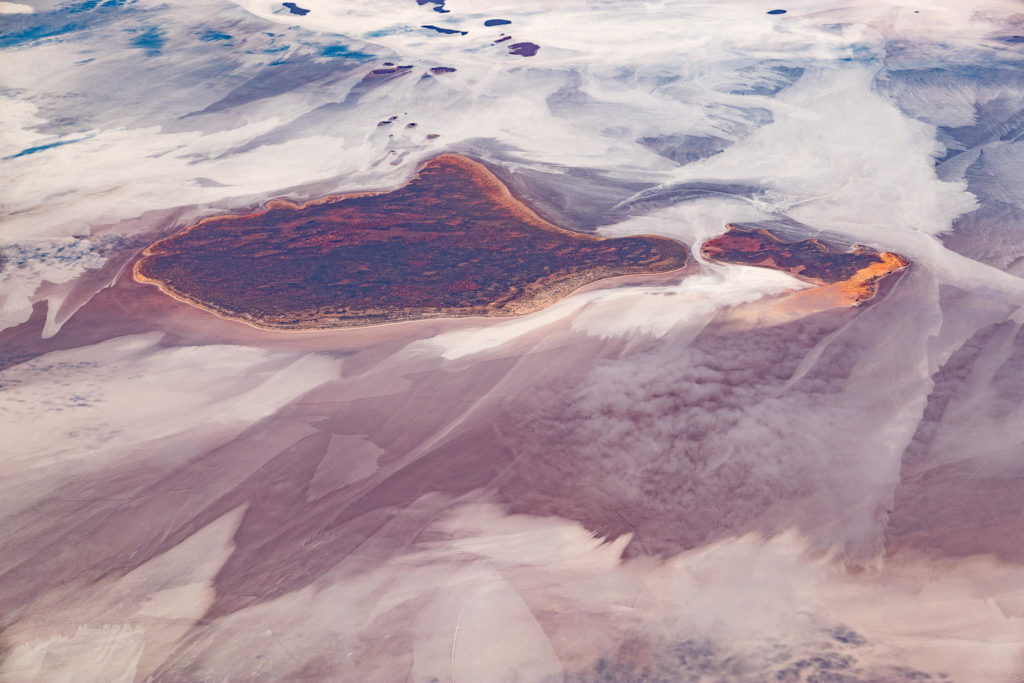 This photo is very particular. Can you share what is it showing?

I’m glad you like this image, it’s one of my favourites. I actually photograph this through the window of a Boeing 737 as I was flying from Brisbane to Perth on the West Coast. So it’s shot through a plane window at 30,000 feet and what you are seeing here is one of the big salt lakes of central Australia. It’s called Lake Gairdner and in some places it’s so flat and hard on the surface that they photograph a lot of car advertisements there. If you ever see a car advert with vehicle zooming around on an enormous white plain it might well have been shot here. When I am flying coast-to-coast in Australia, I like to sit near the front next to the window and if I’m lucky I’ll get window that’s clean enough to actually photograph through. Even through perspex it’s possible to get a decent photograph – this one is a double page spread in the book and looks fantastic.

Aerial photography allows viewers to have different perspectives about a subject and the element of symmetry is almost present. This is something you can see in the soccer field and the small airplane field – is this something you are experimenting with or like to depict in the images?

Many aerial photographs taken at a normal angle to the ground, let’s say about 45°. Personally, whilst this is a necessary angle for some subjects, looking straight down, in other words exactly vertically, is probably the most graphic angle to shoot from when you are up in the air. This perspective allows you to look for very specific regular patterns and graphic shapes, the soccer field and the aeroplane parking area good examples of this. The soccer field is actually in metropolitan Melbourne, and the airfield is the general aviation area of Parafield airfield in Adelaide.

Moving forward, will you be doing more of these aerial projects?

Will I be doing any more of these aerial projects? I certainly hope so I do enjoy the point of view and I have been shooting a little bit more with unmanned aircraft what people are calling drones. These give you an interesting point of view however, they can only go up to 120 m in height and this does not allow the sorts of graphic vertical images that I prefer to shoot from may be 2000 feet. They have their place, but nothing beats shooting out of the open door of a helicopter or circling tightly overhead in a small Cessna 172 aeroplane.