Founded in 2002 in New York, the fashion label rag & bone puts great importance on quality, expert craftsmanship and attention to detail – a philosophy they share with Leica Camera. Therefore, CEO and creative director of rag & bone, Marcus Wainwright, was the perfect choice for designing a limited edition of the Leica M Monochrom. A keen photographer and Leica lover himself, Marcus shared with us the following series of his black and white photographs. During a short break in his busy schedule, we spoke with him about how photography influences his work, the beauty of monochrome images and what it was like to redesign something he already considered to be perfect.

How did you first get into photography?

My dad took photographs of our entire lives. He was a keen amateur photographer and he was just documenting our lives. In those days everyone had photo albums so his and our lives were in a photo album. The family has everything documented and it’s something I just grew up being aware of: The power of photography to some extent. I had a certain amount of anxiety about the amount of times he’d embarrass us by taking photos in different situations.

I didn’t buy a camera myself until my early twenties. I was living in London, took a few pictures and things grew from there. Things changed when I moved to New York and picked up a second hand Leica M6. I fell in love with the Leica brand and aesthetic.

I was mainly shooting street photography but I don’t really have the confidence of taking pictures on the street. I was living in Williamsburg in 2001, when I first came to New York, and I remember there was this guy taking a picture of an old chap sitting out on his stoop in the Summer. He just went crazy. This guy was 90-something and he chased him down the street, shouting “Give me the camera!”. That’s why I tend to take pictures of abstract things now. I’m scared of being chased down the street.

What is it about black and white photography, which interests you the most?

The images you’ve shared with us are of forms and compositions occurring in the natural world. Why did you choose to shoot these images?

There’s this Kertész picture of rain running down the pavement. It’s very simple but for some reason I really like that. I like patterns – regular patterns and irregular patterns – they offer a certain consistency to an image. I like Richard Misrach photos too. Although they are color, they could be anything. It’s an alien, otherworldly thing and there’s no sense of scale.

Harry Callahan was another American photographer known for his abstract images of the natural world. He would walk every morning and photograph whatever caught his eye. He also worked a lot with lines and form, light and darkness, as you do. Can you give us an insight into your process? Are these images taken on walks through nature?

I spend quite a lot of time on the beach with my kids. It’s a bit like being on the moon, especially in Winter. It’s a completely barren, purely natural landscape and there’s no human element to it. There’s a certain peace and tranquillity there and it’s visually simple but very impactful.

Your photos featured here work with abstracted waves, lines and circular forms, elements that are also very present in fashion design. Does photography inspire your work as creative director of rag & bone? How do the two fields influence each other for you?

My brain works in a particular way. In terms of clothing, I get very stressed by frilly paraphernalia that isn’t necessary and I’m obsessed with function. It’s not a reductionist thing all the time but it’s about reducing something to its purest form to create a perfect garment. When I look at something and it doesn’t fit and the details aren’t right or the balance of the pocket isn’t right, all of those things stress me out. When you have a perfect image there is no source of stress within that image. When it works, you look at it and it’s pleasing. It makes you feel safe, or maybe that’s not quite what I mean. The feeling it evokes needs to be of perfect balance, rather than the opposite, which is chaos. My brain tries to work towards a pure form. It’s like a Savile Row suit. It’s perfect and there’s a complete absence of chaos.

What does Leica mean to you?

For me, Leica personifies the pursuit of perfection in an object, whose whole mission in life is to perform a function and that’s why I love it. I love the fact that it just doesn’t change. It’s just constant updates of a perfect design and has such a singular sense of purpose. It doesn’t need to look good. It does happen to look good but only because it’s such a pure object. Leica cameras do what they’re supposed to do and nothing else, and that’s beautiful. It’s also a brand that can make a black and white only camera, even more than that they can make a digital camera without a screen. It’s just great! 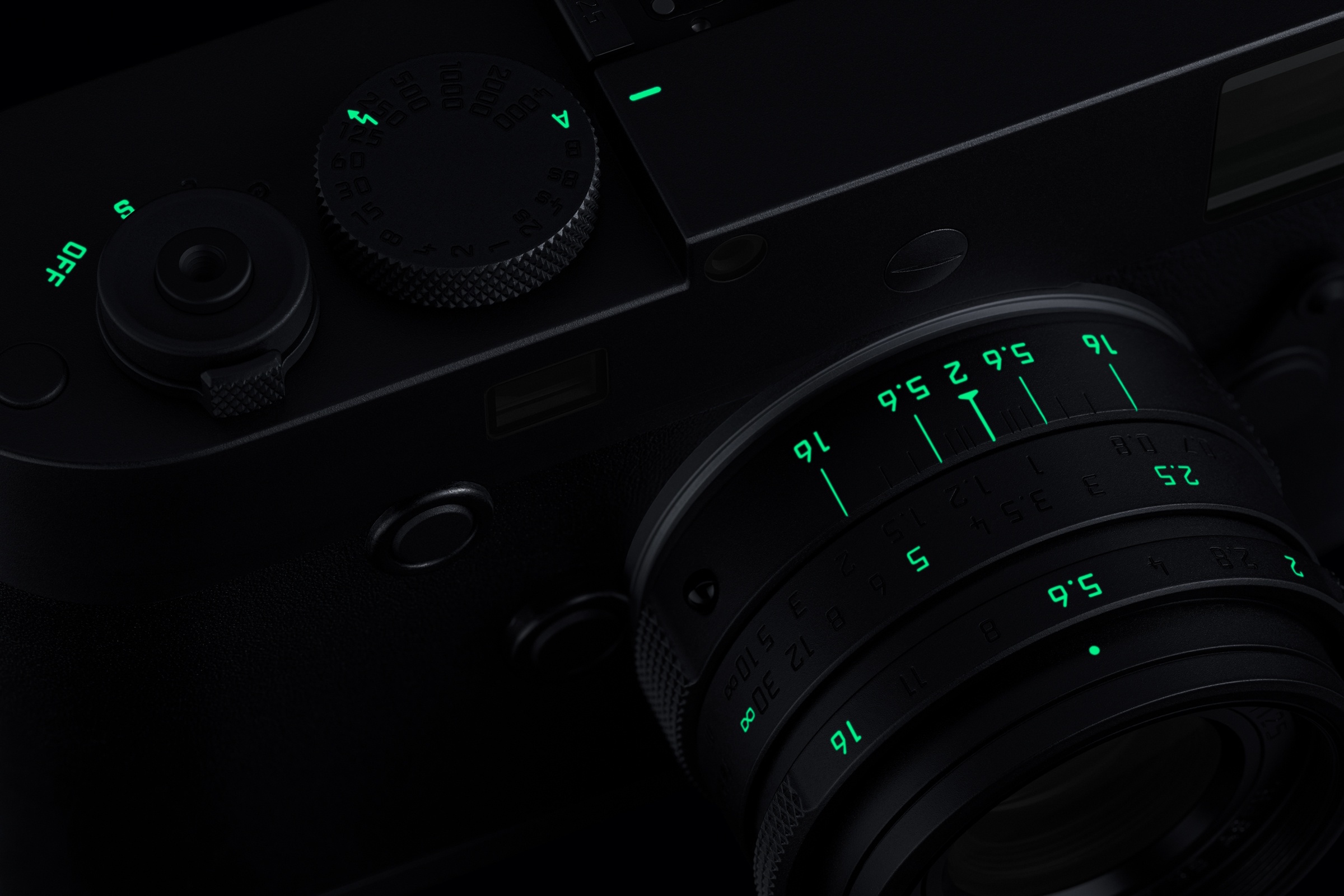 By removing all unnecessary features and functions, Leica cameras are known for representing the “essential” in photography. How do you go about redesigning something like that?

What I try and do with everything is to take it and try and make it better. With something that is already pretty perfect it was very hard. There are certain things that I like from other walks of life and I thought could be refined, such as the matt finish and the leatherette finish, which I made a very clean black leather. The knurling on the aperture ring is not new to Leica, but it gives me a better feeling when I’m taking photos. When I design something I try to think on a subconscious level, is there anything about the object that doesn’t necessarily bother me but that I subconsciously notice. There’s probably something in your house that bothers you, like a squeaking hinge on a door. It’s very simple to fix, you could just oil the hinge. But instead you spend 3 years subconsciously irritated by it but not enough that you would go and get the oil. Your life would be that much better if you got the oil.

In the spirit of the Noctilux and fitting the inconspicuous nature of the camera, I chose the luminous features. I’m drawn to watches as well and there’s something about the purity of function that I love. I just thought that seeing as this is a camera that’s used in low light a lot, maybe there’s an opportunity to make this one aspect of the camera more functional. I think it really works.

Finally, what advice would you offer to your fellow photographers?

It’s so important to breath and take your time. It’s something that I don’t do enough, and my oldest son is the same, we’re often in a rush. It’s a bit like a biathlete at the Olympics, skiing for so long and then having to lie down and shoot the target. My son is always in a rush. We were on safari and he was burning through film shooting pictures of this lion. I just tried to get him to slow down and breathe.