Alan Schaller is a London based photographer who specialises in black and white photography. His work is often abstract and incorporates surrealism, geometry, high contrast and the realities and diversities of human life. Alan shoots primarily with the Leica M Monochrom (Typ 246) but also with the Leica M10-P.

He co-founded the Street Photography International Collective (SPi), which was set up to promote the best work in the genre, and to give a platform to talented yet unrepresented photographers. The SPi Instagram account is the largest dedicated street photography resource in the world with over 700,000 followers.

Here we offer an exclusive look at Alan’s latest series. A light-hearted take on one of the unavoidable urban dwellers and almost constant companions of any street photographer – Pigeons.

I think pigeons are unfairly maligned. People often describe them as ‘rats with wings’, but really they are quite fascinating creatures, and certainly tricky to photograph.

The human relationship with pigeons can be traced back to the beginning of civilisation. Domesticated pigeons, also known as rock doves, were first depicted in pictographic writing on clay tablets in the Mesopotamian period dating well over 5,000 years old. Some scholars even believe that the birds were kept by Neolithic man as far back as 10,000 years ago.

Pigeons are found to some extent in nearly all urban areas around the world. Estimations put the number of pigeons around the world at 400 million and their numbers are rapidly growing due to increased urbanisation. New York City alone is home to an estimated one million of them. 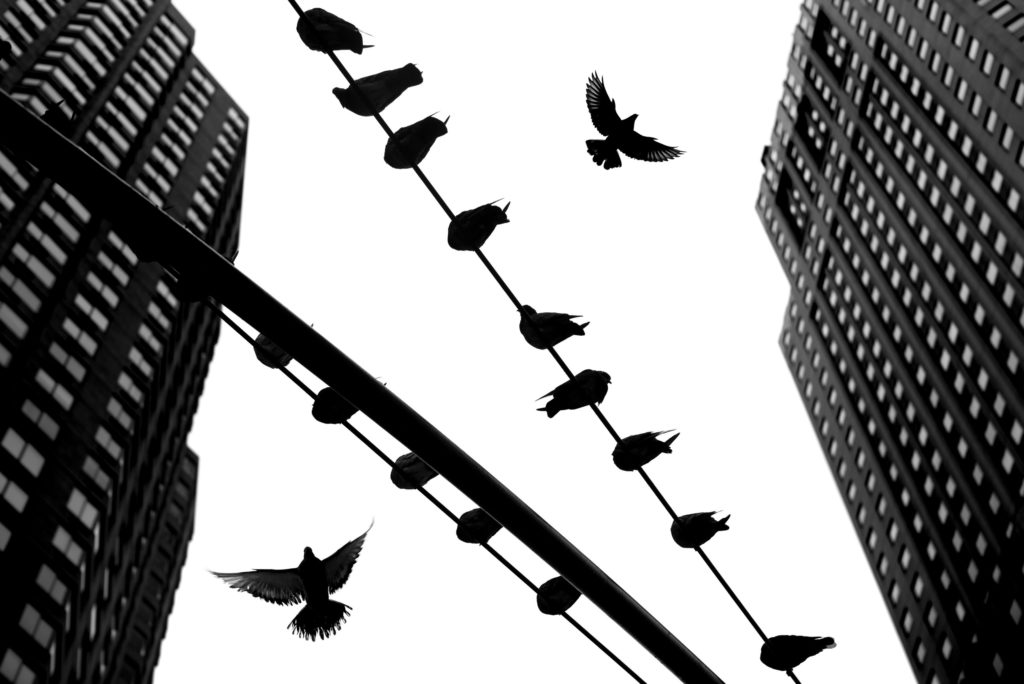 Pigeons are highly intelligent and can be taught relatively complex actions. Due to their homing ability and speed they were often used as military messengers up until 1959.

I am fortunate to travel around the world with my work as a photographer, and although it may sound peculiar, one of the few things that is constant in almost every country I am in, and reminds me of my home city London, is the presence of pigeons – they are everywhere. It took me a while to appreciate this, but I did, and soon began to take the odd photograph of them for fun.

Over time, I began putting these images together and started to think up more imaginative ways to photograph these birds and ways to get closer to them. I am not going to pretend this is a profound, deep series, but more a study and celebration of this successful bird, and how it interacts with us and our cities. Pigeons are a part of our lives whether we like it or not, and they are not going anywhere.

As subjects pigeons can be frustrating. Taking interesting photographs of these birds poses a few challenges, which I find throughly enjoyable if truth be told. They are skittish, unpredictable and fast, and often fly away right when you are about to press the shutter. I have identified several factors that can help in capturing a successful image. Pigeons in huge cities like Mumbai, London or New York are often quite ‘brave’, or more accurately put, acclimatised to the presence of humans. As such, we can approach them with ease – much more so than a wood pigeon in the countryside.

A few of the photographs in this on going series illustrate large groups of pigeons. One doesn’t often come across them in flight, but they can make for wonderful compositions with enough patience.

You have to rely on an element of luck, but the thing that really helps, is to pre-visualise the type of image you would like to create. Then it’s just a matter of waiting for it to come about. For me it helps to decide on the focal length, aperture, iso, shutter etc. Therefore I can focus solely on the subject at hand. It’s a technique often used in street photography and it’s also quite essential for creating the style of images you see here. Anticipation is key.

As crazy as it sounds, I often find myself herding pigeons. I usher them towards a patch of light or piece of architecture, I think will compliment them.

When shooting on the streets and on assignments, I can sometimes find myself taking things a bit too seriously. However, it’s hard to do this when crouching down on a street corner surrounded by a bunch of pigeons. Often there will be people looking on, thinking there must be something wrong with me. It connects me to the time and feelings I had when I first started taking photos. A time when everything was simply a bit of a game.