Photographer Jasper Doest speaks about his encounter with Bob the Flamingo

The award-winning wildlife photographer, Jasper Doest, has had countless, different animals in front of his lens. However, when the philanthropic flamingo Bob came into his life some time ago, he found himself facing new photographic challenges. Doest tells us what happened the first time he met Bob, how the flamingo is managing in his new environment in the middle of civilisation, and what we people can still learn from a bird.

Could you describe your first meeting with Bob?

My cousin Odette Doest is a veterinarian on the island of Curaçao. She contacted me to ask for photographic work to decorate the waiting room of her practice. She has this funny sense of humour and thought it would be nice to present photographs of polar bears, arctic seals and arctic foxes in a Caribbean veterinary practice; but I convinced her that she needed to show local wildlife in order for her clients to engage with the natural beauty that the island has to offer. She agreed. So I booked a ticket to Curaçao and the day after my arrival a flamingo walked into my bedroom.

What were your thoughts when you saw him for the first time?

It’s difficult to describe the thoughts that go through your mind when a tall pink bird steps into your bedroom in the morning. I was stunned. I’m a photographer, so I guess my initial reaction was to document this, as it had such a visual appeal.

Why did you choose to keep him?

The bird had crashed against the Hilton Hotel Curaçao the month before, and, although it had fully recovered in the meantime, Odette recognised that it wouldn’t be able to survive in the wild. And that’s where she had three choices: she could release the bird (knowing it wouldn’t survive); she could euthanise the bird (as it would have no life in the wild); or she could keep the bird. So, she did the latter and took him in. She named him Bob and made him an ambassador for the conservation charity she runs to educate children about nature conservation and animal welfare on the island.

How did Bob get famous in Curaçao?

A few years ago Odette founded the Fundashon Dier en Onderwijs Cariben (FDOC), a conservation education charity through which she visits many schools. So, many children go home, telling stories about Bob. Also, she got quite a lot of good attention from local television and radio stations, and after my visit I started to share the story through different media outlets. The story became really popular, and once I started to share images on the National Geographic Instagram account, it really took off. And now the images are travelling around the globe with the current World Press Photo exhibition, where we recently received two awards for this work. So Bob has not only turned out to be the bird ambassador for the FDOC, but is slowly becoming an ambassador for the island of Curaçao.

How would you describe Bobs behaviour towards people?

He’s very relaxed and not too bothered. He just does his own thing. Flamingos are normally very frightened of humans, but he doesn’t behave like that and seems perfectly fine being around people. The school children are allowed to pet him under Odette’s supervision, and he’s very friendly towards them. I think it’s also a matter of finding the right balance there. Odette is very well aware of the fact that this is not a life he has chosen. So she gives him time to be a flamingo. He shares the house with two other flamingos that couldn’t be released, and they spend most of their time together. Odette has built a saltwater pool in her backyard, which they use on a daily basis, and she often takes Bob out for a swim in the sea, so that he can spend time in the wild. 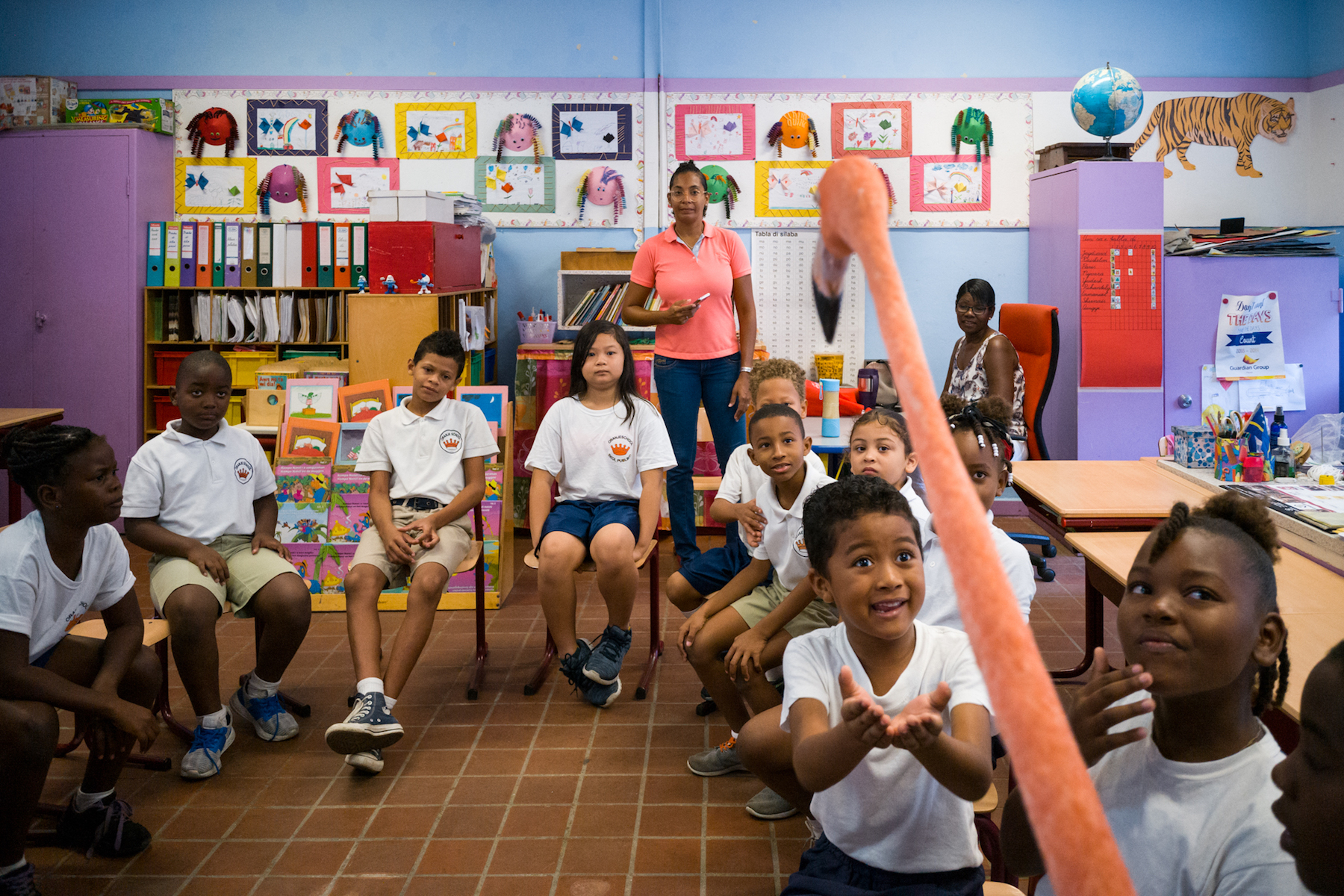 What was the biggest photographic challenge in this project?

Visually there were no real challenges; but the biggest challenge for me was to keep it real. Seeing a flamingo in a human setting is so out of context that some of the imagery became very funny, and I didn’t want it to be a series of funny photographs of a flamingo totally out of context. The humour is definitely a way to attract people to the story; however, I needed to explain the importance of what Bob and Odette were doing from a conservation standpoint, and to show the difficult choices within wildlife rehabilitation as well. That was only possible by taking this narrative-based approach.

You have used different Leica cameras to capture the life of Bob. What was your favourite one and why?

I started with the Leica M240, but changed to the Leica M10 as a lot of these settings were indoors and I needed the high iso capability. I love the camera: it’s small, it’s not intrusive, and I like the fact that I can use it with the Visoflex to shoot the images from Bob’s perspective. I recently started using the Leica SL, both with the SL lenses as well as the M glass, and have had a right angle finder made for the camera for the specific purpose of immersing myself into the bird’s life. But, as a shooting experience, nothing beats the M for me.

What do you think about Bob’s future?

I hope he will continue to have a happy life. He’s about 11 to 12 years old now and flamingo’s can get quite old. So I can already envision my cousin as an old lady, sitting in a rocking chair on her porch, together with her flamingo. However, one of the reasons Bob couldn’t be released is because he suffers from arthritis in his feet. Odette gives him regular therapy and does whatever she can to help him, but I’m not sure if he will live to be really old. I think as a general lesson it’s good to take life as it comes, one day at a time.

What could the story of Bob tell us, the viewers?

My work focuses on the intersection between man and nature, while creating visual stories that provide insight into the non-human lives we share this planet with, as I definitely recognise the unsustainable nature of the current human patterns of consumption. However, I think it shouldn’t all be gloom and doom when we talk about human impact. Impact is a word that can go both ways, and I think this story is a good example of that. As much as the story is about this beautiful pink bird called Bob, it’s also about the incredible work of a strong independent woman that I’m proud to call my cousin. To me she’s a true conservation hero, and proof that one individual can make a difference by taking care of the world that surrounds us. Empathy is the starting point for initiating positive change, and to me that’s the big take-away from this story.

Jasper Doest is a Dutch photographer who likes to explore the interplay between people and nature. By creating touching pictures, he hopes to build bridges between the viewer and the flora and fauna that surround us every day. His mostly sensitive photographs have been published in magazines such as National Geographic and GEO, and have earned him the World Press Photo Award and Wildlife Photographer of the Year award.